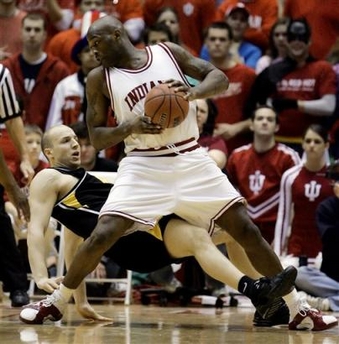 Jonathan Watters
@DraftExpress
Marco Killingsworth had a great opportunity to impress the scouts tonight against a big-name opponent (JP Batista) that probably didn't have the physical tools to defend him very effectively. Unfortunately, Killingsworth wasn't up to the task. While he still managed to score on several nice back to the basket moves, he never came close to taking over offensively, and the Hoosiers needed his presence badly in this one.

At the same time, Killingsworth displayed many of the traits that have earned him a bit of a "one dimensional" label. He was thoroughly dominated by JP Batista on the defensive end, wasn't much of a factor on the glass, and committed 4 turnovers (right at his season average). Most importantly, it was Killingsworth's foolish decision early in the second half to talk back to an official that led to a technical foul and a spot on the bench. Indiana was completely overmatched on the interior without him, and he wasn't a factor the rest of the way.

In the end, this wasn't a stock destroying game for Killingsworth. The issues mentioned have been evident since early in the Big Ten season. However, this was a missed opportunity for Killingsworth to show off what he can do against a player that he will likely be competing against for a spot in the draft.
Read full article

Strengths
The wide-bodied and skilled big man is a load to handle in the post at the NCAA level.

Killingsworths physical attributes land mostly in the weaknesses section of this scouting report, but he does have excellent strength and a very strong base that he uses extremely well to accomplish what he does at the college level.

Offensively, Killingsworth is a man amongst boys in the NCAA. He establishes good, deep position on the block, and has extremely soft hands to make tough catches, as well as terrific footwork and a very soft touch around the basket. When he gets the ball in position to go to work with his back to the basket, he usually gets the job done for his team, to the tune of 17 points a game on 55% shooting. Killingsworth is left-handed which makes him very tough to contain when he has his man pinned around the hoop. He gets very low to the ground, showing great balance, and uses his rock-solid trunk to create space for himself, being able to spin to either shoulder and finish with a wide array of moves and with either hand off the glass, particularly with a beautiful jump-hook or sky-hook shot. Hes smooth, confident, smart, very patient, fundamentally sound and always knows exactly where he is in the post.

In terms of rebounding, Killingsworth gets the job done reasonably well mainly because of his ability to box-out his man effectively and make tough catches thanks to his terrific hands. He is a tough player who is not afraid to stick his nose in and make the extra effort to come away with a rebound.

Killingsworth is generally a smart player who appears to know his limitations, showing a solid understanding of the game and knowing how to maximize his ability at the collegiate level. He displays nice skills passing out of the post to find the open man when hes committed to playing a team game.

Weaknesses
Killingsworths weaknesses revolve almost exclusively around his very average physical attributes and the role he plays he in college.

Listed at 6-7 at Auburn at age 22 and 6-8, 270 pounds at Indiana at age 24, Killingsworths height is less than ideal for the NBA power forward position. He does not have great athleticism or a huge wingspan to make up for that either. Its not rare to see him get his shot blocked when going up against bigger or more athletic post defenders even in college, for example in the UConn game.

Killingsworth is just an average athlete at the college level, which means hed be below average in the NBA. He plays under the rim for the most part and does not have very good footspeed, quickness or leaping ability to help make the transition from college center to NBA power forward. His conditioning level has been a concern at times for Indiana this year as well, as he struggles with fatigue late in games with the 28 minutes he averages this year.

While he has the height of a small forward, his skill-set and role at Indiana leave no doubt that his most comfortable position would be center. Killingsworths perimeter game is not a strong point of his, even though he sometimes tries to prove otherwise, only hitting 4 of his 18 attempts from behind the arc this season, and being a very average free throw shooter. His ball-handling skills are rudimentary as well.

Defensively is where Killingsworth would likely struggle the most, as he has trouble defending even his natural center position one on one at the collegiate level and does not have the lateral quickness to keep up with almost anyone on the perimeter. His extremely wide frame does not help much in this area.

Beyond his other limitations, his role at Indiana leaves serious question marks about how his offense will translate over to the NBA level. Being the #1, #2 and #3 option for the Hoosiers, the entire offense revolves around his ability to get the ball on the block and score. There is not a team in the NBA who would be willing to call even a fraction of the amount of plays that he gets in Bloomington. This has not proven to be the most effective strategy in the world anyway, judging by Indianas record this year and the fact that they are on the bubble to make the NCAA tournament.

Turning 24 recently, there are serious doubts about how much upside Killingsworth has to improve on his flaws to make up for his limited physical attributes.


Competition
A very highly touted recruit out of high school (despite being listed as a 6-6 PF), Killingsworth played 3 solid, but unspectacular seasons in the SEC for Auburn, helping them to the Sweet 16 in 2003 with Dallas Mavericks guard Marquis Daniels. After declaring for the draft in 2004 and garnering almost zero interest from the scouts, Killingsworth decided to leave the SEC for Indiana, forcing him to redshirt for one season in 04-05. He started the season as a man on a mission, tearing apart frontcourts almost singlehandidly and leading Indiana fans to start contemplating a possible return to the final four when McDonalds All-American power forward DJ White was finally healthy enough to return to the lineup. His most impressive performance (see links: top weekly performers) by far was a 34 point, 10 rebound, 7 turnover effort against Shelden Williams (who he dominated) and Duke.

Almost immediately after the start of the Big 10 conference slate it appeared that teams had figured out how to defend Killingsworth and Indiana and his production dropped dramatically. Up until that point Indiana was ranked as one of the top teams in the nation in both field goal and 3-point percentage, meaning that teams could not rotate over to help defend him in the post unless they wanted to risk giving up 3 points to one of Indianas numerous perimeter threats. Once the outside shots stopped falling, the double-teams started coming, and thats when both Indiana and Killingsworth hit a huge wall, losing 7 of 8 games in one particular stretch. Indiana appears to have recovered at the time of this report, winning 3 straight games, 2 against the bottom feeders of the Big 10, and one against slumping Michigan State. A solid performance in the remainder of their conference schedule and the Big 10 tournament will ensure them a spot in the NCAA tournament.


Outlook
Killingsworth is a classic example of an undersized, but terrific NCAA post player whose game does not appear to translate very well to the NBA. Projected to play at the deepest position in the league, power forward, Killingsworth will not be able to just bully his way around the hoop with his strength the way he does in the Big 10.

To really have a chance at not just making, but also sticking in the league, Killingsworth will likely have to take the Justin Reed route and shed 25-30 pounds to help improve his quickness and give him better chances of playing and especially defending the perimeter.

As of right now, Killingsworth is a bubble 2nd rounder who has a better chance of going undrafted than landing in the 1st round.

Killingsworth is a prime candidate to attempt to help his stock at Portsmouth, the all-seniors NBA draft camp.
Read full article