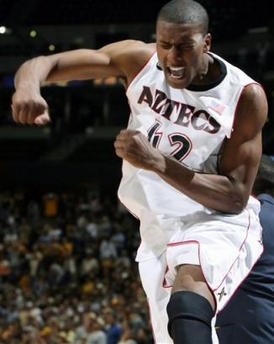 Jonathan Givony
@DraftExpress
If the name Marcus Slaughter sounds familiar to you, there is a good reason for thathe barely left the US and already should be on his way back if NBA teams are paying attention at all. Slaughter left school a year early possibly, but certainly showed that there is more than one route to making the NBA. He went to Izmir, Turkey to play for a team that does some of the best scouting, but is also notorious for not being particularly reliable in terms of paying those players on time.

Slaughter went undrafted in 2006 and immediately decided to take a six-figure gig to play for Karisyaka. The team only finished 12th in the league, but Slaughter made his impact felt immediately by averaging a double-double13 points and 10 reboundswhich is very rare for a rookie in Europe, let alone one that should have been a senior in college.

Slaughter is a fantastic athlete with a 6-11 wingspan and a fantastic frameand should be able to translate his rebounding ability over to the NBA, particularly on the offensive glass. He still has work to do on his mid-range jumper and overall perimeter skills, but there is surely a place for him somewhere in the league in a role similar to the one James Singleton played over the past two years with the Clippers. Hes already reportedly drawing heavy interest from a few NBA teams, and would be a solid target to sign for the minimum.
Read full article

Strengths
Although he doesnt show enough of the skills to be projected there just yet, at 6-8 (measured in Chicago) Slaughter has a prototypical frame for an NBA small forward, featuring huge shoulders, a thin waist, strong legs and a 6-11 wingspan. Athletically, he has excellent quickness running the floor, good leaping ability and plenty of strength to compliment his overall tenacity.

His best attribute right now is his rebounding ability, thanks largely due to his quickness, length, above average hands, strength and toughness. Slaughter attacks the glass ferociously, averaging 11 rebounds per game, making him the 5th best rebounder in the NCAA statistically. His attitude is much improved here, showing better understanding of how to utilize his skills on the glass to go along with a very solid motor, allowing him to go out of his area to get rebounds and always be somewhere around the ball. This shows up particularly well on the offensive glass, where he pulls down nearly half his rebounds.

Slaughters overall aggressiveness also helps him get to the free throw line at a fantastic rate, well over 9 times per game. Once hes there he knocks down his free throws at a solid 76% clip.

He was almost strictly an inside player in his first two seasons at San Diego State, but is now starting to move his game out to the perimeter and is making some small, but important strides in this area. His ball-handling in particular looks slightly better, being able to lead the break or put the ball on the floor somewhat awkwardly from the perimeter and attack his man. Slaughter has very powerful legs and is able to get to the basket in just two very large strides from the 3-point line thanks to his athleticism, often being sent to the line because of how tough it is for big men to contain him.

When properly utilized, Slaughter is one of the toughest players to defend on the west coast because of his all-around versatility at the power forward position. Few can keep up with his combination of strength and athleticism both inside and out, but especially on the glass. His passing ability is much better as well, showing better decision making skills, an improved attitude, and just a better all-around understanding of the game. His assists are way up while the turnovers are down on the year to back this up.

Weaknesses
Slaughter is still a raw prospect in many facets of the game and could really have used another year in college. His biggest problem right now is the fact that hes obviously a tweener, showing a small forwards height and frame, but skill-wise clearly being a power forward. Slaughter will have to either add bulk to his frame to become a legit PF, or significantly improve his skill level which is sorely lacking right now.

Most of the damage Slaughter does offensively comes off layups, dunks, offensive rebounds and in transition. His ball-handling improved his junior year, but is still nowhere near being NBA caliber for either the Small or Power Forward positions. His back to the basket game is extremely raw, as he displays little to no footwork inside the post. His jump-shot is not a strength of his at this point, being fairly streaky from mid-range and having absolutely no range beyond that. His left hand is non-existent both handling the ball or finishing around the hoop as well. His passing has improved, but still has a ways to go in terms of finding teammates outside of the post.

Defensively, Slaughter doesnt have great size for the power forward position, and clearly lacks any type of experience to be projected as a small forward who is expected to defend the perimeter. Even defending the post Slaughter shows poor instincts at times, risking his position excessively going up for blocked shots and getting himself in foul trouble by being overly aggressive.

Slaughter displays just an average feel for the game in most everything he does, particularly settling for moves and shots that clearly arent yet in his repertoire. He was showing some of the natural progress that most raw big men show from their sophomore to junior seasons this year, but still did it at the weak Mountain West Conference level and never against top competition.

Outlook
After prematurely burning his draft card last year, Slaughter has declared again and is in the draft for good, eventually hiring LA based agent Dan Fegan. He's considered a 2nd round prospect at best, with a better chance of going undrafted than landing in the 1st round. Slaughter will likely attend the Orlando pre-draft camp and hope to land on the right team with a good PG that will allow him to play to his strengths. There are many things he will need to show here, and he'll need to have a truly dominant camp to work his way into the 1st round.
Read full article

Jonathan Watters
@DraftExpress
A player that surprised many by somewhat foolishly declaring for the draft last year and burning his only draft card only as a sophomore, Marcus Slaughter has healed from the foot injury he suffered at the Chicago pre-draft camp and is now showing vast improvement in his junior season.

Slaughter has been an absolute animal on the glass as of late, pulling down an impressive 52 rebounds in his last 3 games. Hes also been scoring at a good clip with 60 points in those games on a solid 17/32 shooting from the field and 26/31 from the line. Together these stats all begin to paint a distinct picture for you about the progress Slaughter has made over the past few months, with the most notable improvement coming in his aggressiveness and general attitude. Slaughter has been attacking the glass relentlessly this season, ranking 7th in the nation in rebounding with over 11 per game thanks to his superb quickness, excellent hands, long arms, tenacious attitude, instincts and much improved motor. Hes been living at the line this season and is hitting close to 80% of his free throws, up from 70% last year. His FG% is up as well to a very solid 50% on the year.

At 6-8 with a 6-11 wingspan his frame is prototypical for an NBA small forward. He was almost strictly an inside player in his first two seasons at San Diego State, but is now starting to move his game out to the perimeter and is making some small, but important strides in this area lately. His ball-handling in particular looks better, being able to lead the break or put the ball on the floor from the perimeter and attack his man. Slaughter has very powerful legs and is able to get to the basket in just two very large strides from the 3-point line thanks to his athleticism, often being sent to the line because of how tough it is for big men to contain him. When properly utilized, Slaughter is one of the toughest players to defend on the west coast because of his all-around versatility at the power forward position. Few can keep up with his combination of strength and athleticism both inside and out, but especially on the glass. His passing ability is much better as well, showing better decision making skills, an improved attitude, and just a better all-around understanding of the game. His assists are way up while the turnovers are down on the year to back this up.

In terms of weaknesses, they mostly revolve around his position at the next level, less around how good of an actual basketball player he is. While his ball-handling is much better than what it was last year (being almost non-existent in tight half-court situations), it is still not NBA small forward caliber. Hell have to work hard to continue to add polish to this part of his game, particularly with his left hand. In terms of range on his shot, he has not hit even one 3-pointer this season, but has also only attempted one. Its tough to assess this part of his game without actually seeing it, but his delivery from mid-range does not look particularly smooth either. Since he only defends post players at the Mountain West conference level, his perimeter defense is largely untested as well. He has done a better job of staying out of foul trouble this season, and is generally showing a better activity level from what I remember of him last year.

Regarding Slaughter and the draft this year, things got very murky. Had he not burned his draft card last year as a sophomore, he would have been a shoo-in to test the waters and see where he stands. As of right now he will have to be extremely careful with whatever he decides to do, because if he is not at least a lock for the top 40--which he definitely is not--then he has no business declaring. Showing similar improvement next year to what he did this season would probably be what puts him over the top, but otherwise he is playing with fire if he decides to roll the dice.

Fortunately for him (and in no small part due to his efforts), his team is rolling lately at 5-1 in the MWC for sole possession of first place. The Aztecs have one of the most athletic teams on the west coast regardless of conference, and could be a real headache for any team if they are able to win the automatic bid and make the NCAA tournament. If not, most of their talent returns next season and they should be a force to be reckoned with.
Read full article