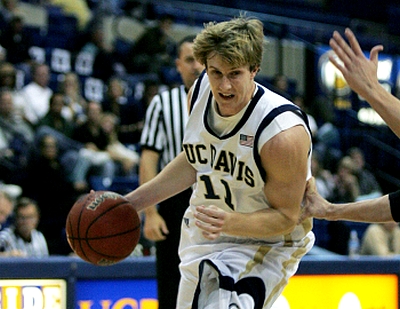 After having a very limited scoring role his first two years at UC Davis, Mark Payne has upped his production significantly as a junior, taking on a much larger role in the offense and looking pretty good in the process, showing an expanded skill level and maintaining good scoring efficiency (64% TS%).

Not ever showing any propensity for three-point shooting prior to this season (only 2 made threes on 16 attempts last season), Payne has done a nice job adding in some range on his shot this season, making 15 of 34 attempts on the season. While he isnt taking or making a high volume of threes at all, he has very nice form when spotting up and is hitting for high efficiency, while his excellent free-throw shooting (82%) suggests this probably isnt a fluke occurrence. Projecting to the next level, spot-up three-point shooting will definitely be something Payne will need to rely more on, so continuing to improve this area of his game is a must.

Payne has also looks better with his mid-range game, showing very good accuracy on open shots in the 15-20 foot range, and doing a very good job getting separation for these moves off the dribble, being capable of hitting these shots moving in either direction. Payne shows extremely good coordination and balance in all aspects of his game, and it really shows here, as he does a great job keeping his form in these situations. That said, when defended closely by the opposition, Payne doesnt fare that well with a hand in his face, and his lack of short-range burst makes it questionable how this aspect of his game will translate to the next level.

Going to the basket, Payne showed good explosiveness last season when he mostly operated off the ball and on straight-line drives, but his explosiveness hasnt really translated over very well as hes expanded his dribble-drive arsenal, as he just doesnt appear capable of powering up nearly as well without a full head of steam. Instead, Payne has done a good job using his body control and coordination to maneuver through defenders in the lane, also showing very good touch off the glass, which still allows him to be a strong finisher in the paint.

In terms of ball-handling, Payne definitely is above average for a shooting guard, and he performs very well in space and transition, but he doesnt really have the quick, low-to-the-ground handle to split double teams, while he also struggles to turn the corner in some instances, not having the greatest first step. He makes up for this with craftiness, showing good changes of speed with the ball and doing a good job creating high percentage shots in the paint by shooting over the opposition.

In the passing game, Payne has cut back a bit on creating for others due to the development of his own scoring game, but he still exhibits excellent court vision and an ability to pass on the move, excelling in the pick and roll and transition, while also having a knack for the simple passes. Its still questionable if he could be a full-time point guard at the next level, but his passing will definitely be a strong asset from the shooting guard position, where he is more likely to play.

Defensively, Payne is a scrappy and active player who uses his length well in the passing lanes, averaging an impressive 2.6 steals per game (7th in our database). He shows a good stance in man-to-man defense on the perimeter as well, though his foot speed is definitely lacking, as hes very prone to being beat laterally, and this is something that should be even more concerning at the next level.

Looking forward, Payne is best served coming back to school for his senior season, as there are still concerns about how his game will translate to the pros, and given the learning curve hes shown this year, he could definitely help his stock by coming back and working on some of his weaker areas, namely becoming more of a three-point shooter and working on better transitioning from dribbling to finishing, where he doesnt make full use of his athletic abilities. At the pro level, he will likely have to transition to a full-time shooting guard. The adjustments hes made to his game this season definitely help ease some of the concerns about how his game will translate, though he still is likely to be a defensive liability no matter what position he plays.
Read full article

One of the more unique prospects youll find on the NCAA landscape, not many teams in college basketball have a 6-7 player running the show for them. UC Davis in the Big West conference is one of them, in redshirt junior Mark Payne.

Payne has the size to play any of the backcourt positions, to go along with a good frame. Hes a very good athlete who is fluid in the open court and shows a very nice first step, but is probably most notable for his explosive leaping ability. Hes often on the receiving end of alleyoop lobs from his teammates, which is not something you see very often at this level.

Offensively, Payne has a very strange profile, on one handing making an absolutely ridiculous 74% of his 2-pointers (he was #1 among all prospects in TS% last season, #2 in EFG%, and #2 in overall FG%), but on the other hand only attempting 5.4 shots per game. He gets almost all of his offense around the basket, being a very limited perimeter shooter (converting just 2 of 16 3-point attempts), and showing little in the ways of a mid-range game as well. Part of that has to do with the lack of aggression he shows as a scorer, often driving the lane while not even looking at the basket, and part of that is a lack of overall polish in the half-court. The 12.1 points he averages per-40 minutes pace-adjusted is not very impressive at any level of college basketball, especially not in the Big West.

As a point guard, Payne does a solid job getting his teammates involved, sporting a very nice 2.35/1 assist to turnover ratio. Beyond the assists he picks up by making reads out of UC Davis Princeton offense, he likes to use his athleticism to beat opponents off the dribble and then create scoring opportunities, showing solid court vision a very nice feel for the game in the process. Its doubtful that hes quite that talented a playmaker to man the point full-time in the NBA, though, which is why he must improve substantially as a shooter and overall scorer, and also learn how to contribute playing off the ball. The big point guard fad that so many teams seemed to like experimenting with a few years back has rarely worked out, so well have to see how that effects Paynes stock.

Defensively, its tough to judge too much about Payne with the footage we have at our disposal. He appears to have quick feet, decent length and average strength, as well as a tendency for anticipating and making plays on this end of the floor. There is a big difference between playing defense in the Big West and the NBA, though, so well have to watch more here to get a better read on Paynes potential on this end of the floor.

All in all, Payne is a very unique prospect, even if his game needs a lot of work to convince scouts that he can make the transition to the next level. Only being a junior (albeit a redshirt), Payne is a guy that should be able to draw NBA teams to his games, if only to make sure they arent missing out on something really interesting. Well have to see what kind of strides he makes in his game this season before drawing any definitive conclusions.
Read full article