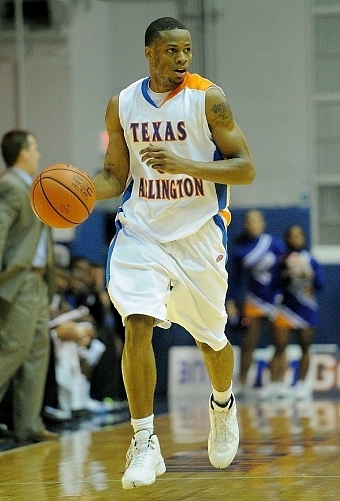 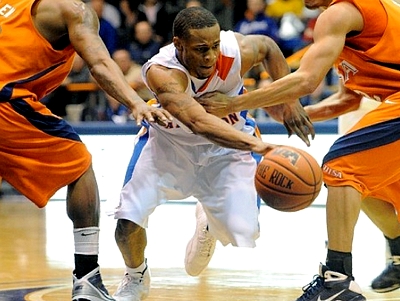 Much as was the case when he received his release from Boston College those three years ago, Marquez Haynes doesnt know where he is going, but he knows how he will get there.
Read full article

A bit role player and defensive specialist in his two years at Boston College, Marquez Haynes has blossomed into one of the leading scorers in his fifth and final season of college basketball after transfering to Texas-Arlington, doing so on impressive efficiency numbers along the way.

Haynes physical profile is solid, as he sports good size for the point guard position at 6-2 or 6-3 to go along with long arms and a chiseled frame. Hes not a great athlete, but is certainly above average at the college level, as its pretty clear that it wasnt his physical tools that held him back from making his mark in the ACC.

Seeing minutes both on and off the ball , Haynes best attribute as a prospect clearly revovles around his terrific perimeter stroke. The 44% he shoots from beyond the arc on five attempts per game clearly isnt a fluke when you look at his incredibly natural shooting mechancis. He creates excellent separation from his defender with the terrific elevation he gets and is capable of making tough shots in a variety of ways, being absolutely deadly with his feet set in particular. His percentages fall off quite a bit (49% to 30%) when shooting off the dribble, but its pretty clear that he can pull up effectively and get his shot off even against bigger defenders.

As a shot-creator Haynes is effective, being capable of going left or right and getting to the free throw line at a very high rate. His strength makes him a strong finisher around the basket at the level of competition he plays at, even if hes not a terribly explosive guy. He shoots over 50% from inside the arc, making him one of the more efficient guards youll find when taking his 3-point percentages and free throw rate into consideration.

Haynes playmaking skills are a bit difficult to evaluate as his team plays at an extremely fast pace and play a very loose and somewhat wild style that often involves forcing plenty of bad shots. Playing alongside a number of shot-happy guards who tend to overestimate themselves quite a bit, Haynes gets caught up in this AAU style quite a bit of himself, leading to some questionable possessions.

Not a selfish player, and clearly capable of making the extra pass, Haynes regardless struggles to make a strong case as a true point guard from the film we evaluated. He tends to dribble with his head down, plays the pick and roll looking strictly to shoot, and averages more turnovers than assists. NBA teams may have a difficult time projecting him into a role in the NBA based on what we saw from him at the Sun Belt level, although a strong showing at Portsmouth could change things quite a bit.

Defensively, Haynes has good potential, as his excellent size, length and strength make him very effective when hes dialed in and even may allow him to see some minutes guarding some smaller shooting guards. He gets in the passing lanes at a nice rate and comes up with some very impressive possessions from time to time. Unfortunately he doesnt display the same intensity level at all times and tends to gamble excessively for steals, things that can be improved on in time but currently hurt his team at the college level.

All in all, Haynes is a good player who shows nice potential as a shooter and defender and should warrant strong consideration for an invite to the Portsmouth Invitational Tournament, where he could increase his stock dramatically with a good showing.
Read full article