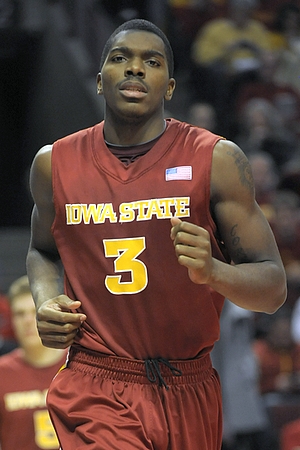 Now, at Iowa State, Gilstrap is easily one of the Big 12s best newcomers and has quickly vaulted up the ranks as an NBA prospect. With his remaining NCAA eligibility still a question mark (at least until March) and his immediate pro future unknown, it is necessary to take his draft prospects seriously even if returning to school still might be an option.

Standing between 66 and 67, Gilstrap is undersized for the power forward position he typically plays, but has above average size for a power wing at the next level. His frame and length certainly help him, as well, and he certainly looks the part from a purely physical standpoint. He is a good, though not elite, athlete at this level, displaying solid explosiveness and quickness in the open floor, and terrific strength to compliment his aggressive nature.

Offensively, he is still a work in progress, with a raw perimeter game and a scrappy inside presence. Gilstrap has made his offensive impact this season on the perimeter, where he has knocked down 44.4% of his shots at 2.8 attempts per game. Though he is clearly a streaky shooter, he has maintained his consistency thus far this season and has shot an impressive 13/25 from the perimeter over his last seven games, against teams such as Duke, Texas, and Kansas.

Gilstraps shooting mechanics are unconventional and his motion is compressed, as he leans forward while shooting, which results in a shot without much arc. While some decision makers may take issue with his untraditional mechanics and his somewhat-shaky shot selection, he makes shots from well beyond the collegiate three-point line and has been hitting shots consistently throughout his career.

His offense from elsewhere on the floor is more of a mixed bag, however. As a slasher, his underwhelming ball handling ability limits him. He drives right almost exclusively and is further limited by his lack of advanced ball handling, particularly in his inability to change directions off the dribble. Furthermore, he is not the best finisher around the basket, showing neither the touch nor the creativity to score, not to mention the basketball IQ to kick the ball out to the perimeter when there are three defenders in the paint.

While he is an explosive player, he has yet to truly utilize this skill in the paint outside of in transition or off of cuts to the basket. He has shown flashes of mid-range game, as well, but as of yet, nothing conclusive, and certainly nothing consistent enough to affect his draft stock. He is still a raw player offensively, less than one year into his first and possibly last NCAA season, but his quick adaptation and versatility should make him of interest as a marginal prospect to NBA scouts.

On the defensive end, Gilstrap is also a mixed bag, though his combination of size, length and athleticism hints at his potential at the next level. The most significant concern, however, is his lack of fundamentals on the perimeter, which does not help him guard quicker wing players. If he improved his focus, from closing out shooters more effectively to making quicker rotations, he could overcome a lot of his deficiencies on this end. For the meantime, however, he is content gambling for steals and, much like the rest of the team, lacking consistent defensive focus. Improving this part of his game will likely play a huge role in how his career ends up.

One thing Gilstrap does very well, however, is rebound the basketball. With 8.7 defensive rebounds per 40 minutes pace adjusted, he is ranked 17th in our database in front of players such as Ed Davis, Al-Farouq Aminu, and Derrick Favors. While his fundamentals are not perfect, the toughness and aggressiveness he shows fighting for position against far bigger players is outstanding and he perfectly utilizes his physical advantages on the boards.

Gilstrap is a fringe prospect at the moment, but he has the type of defined skill set and physical tools that could interest scouts. At this stage he is a combo-forward, but given the dearth of undersized big men and under-skilled wings who currently get by on effort, defensive prowess, and the ability to hit the corner three point shot, it is not out of the realm of possibility to consider Gilstrap getting drafted in June.

This, of course, rests on his ability to continue hitting jump shots and playing well despite playing for the Big 12s worst team. Similarly, he must impress at Portsmouth (should he choose to vacate his appeal for extended eligibility) and in individual workouts. At this stage in the season, there are few truly under the radar prospects who stand a shot at getting drafted, but Gilstrap is certainly worth a look from NBA personnel drafting in the second round.
Read full article