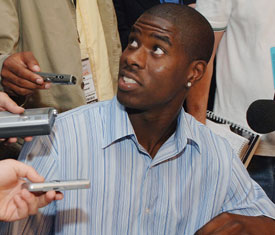 Matt Williams
@DraftExpress
Overview: A blossoming young forward who is starting to live up to the potential that made him a top-2 selection. One of the top players in the HS class of 2004. Won the NCAA title at North Carolina in 2005 under Roy Williams. Has solid athleticism to go with good size. Still has room to add weight to his frame. Starting to turn the corner, and appears to be working hard to improve his game. Struggled initially to find a position on the floor and did not have the aggressiveness you would expect from a player drafted so high. Worked through that and appears to be on the verge of becoming the special player many thought he would be.

Offense: Has improved his jump shot significantly since entering the League. Shoots no-dribble jumpers in two-thirds of his spot-up situations; a telling sign of where he is most comfortable at this point. Gets most of his other touches from one-on-one dribble drives and in transition, but seems extremely content hoisting shots from the perimeter when defenders give him space. Able to shoot an above average percentage on mechanics alone. Kicks his legs from time to time when in rhythm, which makes him look less fluid. Could stand to take that out of his game and improve his footwork. Needs to improve both his consistency and aggressiveness to reach his potential. Asked to post up periodically. Shows some decent moves down low. Tends to avoid turning to the baseline when posted up on the right side, but shows the ability to score over both shoulders at a decent clip from the left block. Doesnt crash the glass as hard as he should given his athleticism. His future remains on the perimeter, and he needs to improve his ball-handling skills and range in order to take advantage of his physical assets. Wouldnt hurt him to cut down on his turnovers and look to assert himself off the dribble more frequently either. Has shown the ability to get to the line at a high rate. His ability to shoot a good percentage will make his development as a slasher that much more worthwhile.

Defense: A tweener? Doesnt translate his physical talents to the defensive end as well he translates them to the offensive end. Has a tough time defending the post. Is susceptible to bigger more experienced post players. Can make an impact defending the perimeter. Ability to contest shots on the perimeter, coupled with the fact that he doesnt take a lot of risks shows how solid a defender he is. A little bit too upright in his stance, which makes it tough for him to stay in front of quicker small forwards. Commits some unnecessary fouls, but that shouldnt be a problem as he acclimates to his competition. Rebounds the ball at a good rate.
Read full article

Strengths
Marvin has the size, length, versatility, athleticism and especially the upside that teams love. These traits give him the ability to play both forward positions. He has a strong upper body and even more impressive is his lower body strength with a very stable, explosive trunk. He can absorb contact and still get shots off. It looks like he could still develop a little more physically. He has room to grow and definitely will continue to mature into his body, which will provide him with even greater control of his athleticism. He is quick in the open floor, explosive and has a good first step. Marvin shows great hops and is a pretty quick leaper, especially going for rebounds. His second and third bounce to get off the floor is almost as good his first. He definitely takes advantage of his athleticism offensively.

The most developed part of Marvins offensive game right now is his almost flawless jumpshot. Its a very natural shot and he shows great form for his size. His shot looks almost effortless and each shot is nearly identical with his elbow tucked in, arms straight, good follow-through and height. His form looks the same whether its a mid-range jumper or a 3 pointer, and he releases it fairly quick. His great leg strength really helps him because he less likely to shoot tired jumpers. Marvin has shown he is a great FT shooter (nearly 85% on almost 5 attempts per game). He is calm and poised at the line and is always confident in the shot.

The few times that Marvin put the ball on the floor toward the basket he showed he has very good handles for a player his size. He displays a low, fast, under control dribble and rarely forces the issue. He provided solid help bringing the ball up the court against full court pressure. Unfortunately for us, Marvin did such a good job playing within the team at Carolina that he didnt display his ball handling skills often. Marvin does not over dribble and does a good job at keeping the ball moving. He is a very unselfish player and shows great floor instincts in his passing. He was not double-teamed often but he did a pretty good job of passing out of it when help defense arrived. After rebounds he was usually quick in finding Raymond Felton with his outlet passes, helping ignite a tremendous fast break offense.

In the paint, Marvin has decent footwork, but not great footwork. He usually wastes no time while in the lane and is rather decisive with his moves. He can play with his back to the basket or facing it, not seeming to have a preference and sometimes he just takes what the defense gives him. He is very aggressive when establishing position offensively, stays low with strength and has good balance. Marvin doesnt shy away from contact and actually looks for it often. He has no problem finishing strong at the rim, even after taking contact. When catching passes in traffic he shows good hands and receives the ball fairly well. Unlike many athletic big men these days, Marvin has shown a desire to rebound the ball. He boxes out well and goes hard after every loose rebound and at least gets a hand on almost anything that comes near him. His solid frame and quick leaping will help make him a tremendous rebounder in the NBA.

Defensively, Marvin has the ability to guard both forward positions. He is quick enough to stay with most small forwards away from the basket and has enough length and strength to guard most power forwards down low. He has a tendency to gamble on defense (part of Roy Williams philosophy) but rarely did he gamble and lose. He has a nice wingspan and shows good timing and anticipation, resulting in several memorable steals and subsequent breakaways. Marvin never gives up on a play and shows tenacity and hustle. He is a student of the game and his knowledge and preparation help him on the defensive end.

All of the above are impressive enough, but the most impressive part about Marvin Williams, and we cant stress this enough, are his intangibles. Ask any of his current or former coaches and they will all tell you Marvin has an incredible attitude, motor, work ethic, and understanding of basketball. His basketball IQ is extremely high (he grew up watching Dean Smith instructional videos). He understands what to do and where to go at all times, and is extremely unselfish. Marvin plays with a passion and desire that is hard to find these days and is very driven but not consumed by basketball. For a player his age, he has shown that he is very mature. The fact that he never once complained about his role or playing time his freshman year and the fact that he understood and embraced his role speak volumes about his maturity. He plays within the team and within his abilities at all times.

Defensively, Marvin still needs to improve his footwork to be able to guard quicker players on the perimeter and he needs to add some strength to guard some of the stronger players in the post. He also needs to improve his defensive communication, especially on pick and roll situations. While Marvin has the tools to be a good shotblocker we have yet to see it from him. Per minutes played, he was only equal to Jawad Williams and slightly behind Rashad McCants in this aspect of the game.

Here might lay the biggest question mark with Marvin. While his versatility can viewed as a strength, the fact he is still a bit of a tweener can not. Is he going to primarily play small forward or power forward in the NBA? Can he become great at one of the forward spots or will he merely be good at both? Thats the tough part about Marvin. At this point in his career its almost impossible to project just what kind of player he is going to be or what position he will end up playing the most.

Outlook
At this point, all we know is that Marvin Williams is going to be a promising forward in the NBA and is most likely a top five pick or possibly even the first overall pick whenever he decides to leave North Carolina. Unfortunately, its just way too early to speculate specifically what kind of player he will develop into. He did such a good job of playing within the system at Carolina that its possible there are phases to his game that he just hasnt shown us yet. You must understand that Roy Williams gave Marvin a defined role, which was to run the floor, take open jumpshots, crash the boards and play defense. Marvin may have the ability to create off the dribble or to shot fadeaways but that was certainly not going to happen with Felton, May, McCants and Jawad on the floor next to him. One thing we do know, Marvin is a terrific talent, a very likeable and coachable kid, with a very high basketball IQ, and a tremendous desire to be great. He will do everything in his power to improve and get better at all facets of the game.

ACC Rookie of the year.