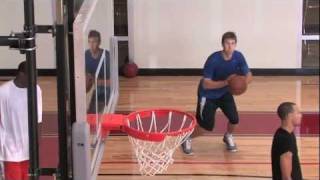 Matt Williams
@DraftExpress
Overview: A great shooter who lacks prototypical athleticism, but has carved a niche for himself as a shooting specialist. Put together a nice career at Notre Dame, playing especially well during his senior campaign. After going undrafted in 2003, he spent time in the D-League before making a name for himself in 2005 with the Bobcats. Despite his shortcomings athletically, he shows great character, is a hard worker, and does more than most expect from a pure shooter.

Offense: One of the best spot up shooters in the game, since he is extremely consistent from the outside when catching with his feet set. Has a compact, accurate stroke, and has improved his ability to shoot off the dribble in recent seasons. Maintains his form when he is shooting on the move, but is nowhere near as consistent a shooter off the dribble and off screens as he is from a standstill. Doesnt make a lot of unnecessary trips into the paint, where he isnt a very efficient finisher. Even when he dribbles off of screens, he tends to pull up for jumpers almost exclusively. Few players in the League shoot a better percentage from the line than he does, which would pay bigger dividends for him if he could draw more fouls. One of the most positive aspects of his game is his ability to take care of the basketball. Pretty good ball handling ability. He may not create shots for his teammates, but he doesnt turn the ball over frequently either, as he sticks to his strengths.

Defense: Lack of lateral speed makes him a liability against quicker guards on the defensive end, but he is able to use his length to avoid getting taken advantage of too frequently. Doesnt create many turnovers, but works hard to stay in front of his man and grabs an occasional rebound. His effort level alleviates some of his physical shortcomings, and only augments what he does on the offensive end. Still a liability in one-on-one situations, which limits the amount of minutes he can play.
Read full article