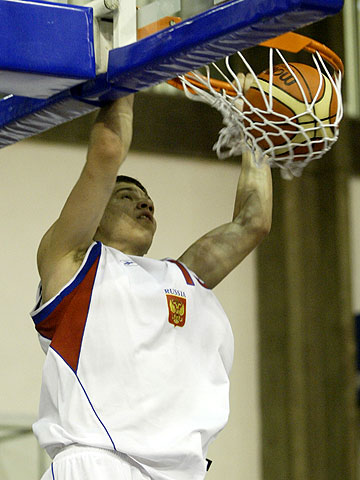 Luis Fernández
@DraftExpress
One of the top scorers in Russia, but he isnt showing anything we didnt know for over a year. Hes the same athletic combo forward with a nice frame but limited skills. Static and open three-pointers, baseline cuts, penetrations in little-to-no traffic, thats pretty much it. His off-the-dribble skills havent improved a bit, and thats not good news when it comes to establishing himself as a quality perimeter player.
Read full article

Luis Fernández
@DraftExpress
Sheleketo looks to be continuing on the right path. From an undersized power forward, hes evolving into a probable small forward with an awesome physical set, which seems to be the Russian specialty lately; Kirilenko, Khryapa, Monya, Korolev, all first rounders, all small forwards, all physically gifted.

You couldnt ask for much more from a small forward in terms physical characteristics: a 6-9 body with a superb frame to convert whats already a decently strong player into a physical force, while enjoying nice athleticism and good explosiveness. Perhaps the only shadow could be placed in his quickness, which being nice, might not be enough to compete defensively against the quickest players in his position.

Skill wise, its another story. Forget the all around game of a Korolev; Sheleketo is much more limited, seemingly headed to be a role player in the senior categories. But thats not necessarily such a bad thing, especially for a player at his position (you usually ask the point guard to be a distributor, the shooting guard to be a scorer and, given the current level of centers, the power forward to be the offensive reference in the paint). Most teams require role players to support their stars: play defense, do the dirty work and hit the open shots. Thats something Maxim might be able to do at any level.

When it comes to scoring, chances are youll see him either using his perimeter jumper or attacking the rim. In Belgrade, he struggled badly behind the arc, but hes usually significantly better than that, although he still needs to gain consistency. Its a static shot, and he needs space to make it, but he has decent mechanics and I think he could end up being solid from this distance. Regarding his slashing game, he doesnt enjoy the required footwork or ball-handling to consistently drive in traffic, so he looks for opportunities where he doesnt need to change direction once he has beaten his matchup with his first step. He likes to finish strong with a dunk, and its not rare to see him cutting for the baseline or running the court to receive the ball with the same purpose.

Defense, rebounding, he can use his size and athleticism to get the job done. In the junior stages, hes usually superior to his rivals regarding these gifts, even if he plays mostly as a power forward. Nevertheless, in higher competition he should be able to keep a certain advantage if he successfully completes his transition to small forward.
Read full article

Luis Fernández
@DraftExpress
Yet another 6-9 small forward. Not as skilled as the others, Maxim Sheleketo is as athletic as Korolev and Claver, and perhaps the most explosive of them right now. Still playing combo forward, he seems headed right to the small forward position, as he has the athleticism and ability to defend the opponent's small forwards, and some developing perimeter skills.

His main offensive weapon is his jumper, which he frequently takes from three-point range. He usually makes it from a stand still, and while you may see him in an off-the-dribble mode, it's generally after a simple and easy movement; as he rarely forces the situation. He's also a great finisher in transition or in half-court offense, cutting by the baseline. He loves to dunk the ball whenever he has the chance. His ball handling isn't much more than average, but he can penetrate with a nice first step, although he doesn't try too much.

As you may have realized by now, he's much more of a finisher than a game creator. And while he doesn't look like a big-time prospect right now, he has enough interesting characteristics to take him into account.
Read full article