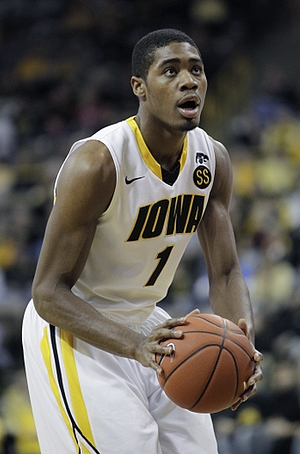 Although he may have flown under the national radar last season, Melsahn Basabe made himself known in the Big 10, earning conference all-freshman honors in his first season at Iowa. His season-best game of 22 points, 13 rebounds, and 6 blocks against Big Ten Champ Ohio State last year gave a glimpse of what the Hawkeyes hope to see even more of from Basabe as a sophomore.

From a physical standpoint, Basabe lacks the ideal height of an NBA power forward prospect, standing just 6'7, but he makes up for that with what appears to be a very long wingspan, a nice frame that looks like it should continue to fill out, and a tremendous motor.

Basabe's offensive skill set was still fairly raw as a freshman, but he utilized his length and energy to contribute offensively by catching the ball in the lane off of cuts and getting putbacks off of offensive rebounds. He also showed that his shot-creating repertoire is a work in progress. About 23% of Basabe's offensive possessions came in post-up situations last season, and although he was able to score on occasion using his athleticism and aggressiveness, he still lacked the polish and fundamentals to be a consistent post threat.

Basabe seemed more comfortable, even when catching the ball with his back to the basket, turning to face his man up and attacking the basket with a dribble or two, where he's able to utilize his rangy strides and the quickness advantage he has on most opposing big man. This part of should his game should continue to improve as he becomes more of a threat as a shooter. He attempted less than one jump shot per game last season and didn't show range past about seventeen feet. His shooting form isn't very fluid, but he did connect on 70% of his attempts from the free throw line and looks to have a stroke that he'll be able to improve in time.

Another area where Basabe can make strides on the offensive end is with his feel for the game. He averaged only a half an assist per forty minutes pace adjusted last season and was almost strictly a finsher, often playing with tunnel vision. As he becomes more of a scorer and attracts more attention from defenses, he'll need to feel defenders collapsing and find open teammates. He turned the ball over almost seven times for each assist he dished out last season, which he'll need to improve upon greatly to become more efficient on the offensive end.

Defensively, Basabe shows some promise, as he possesses a great combination of length, athleticism, toughness, and energy. His 2.1 blocks per forty minutes pace adjusted show his effect as a help defender on the interior, and his mobility and quick feet allow him to be able to step out and guard on the perimeter and hedge out onto smaller ballhandlers.

His lack of size at the four spot will likely give NBA teams pause, but there are players his size who have been successful at that level. He'll need to continue to add strength in his upper and lower body to minimize his physical limitations. And while Basabe also had a solid season as a rebounder as a freshman, players of his mold who have gone on and been able to stick at the NBA level have often been able to hang their hat on being relentless on the glass.

Basabe has the chance to have a big season in the Big Ten as a sophomore in 2011-2012. While his lack of height as a power foward and lack of polish in his skill set will likely prevent him from being a top tier NBA prospect, he does have some traits that could translate to the next level if he continues to work on his weaknesses. He's a player that scouts will be keeping an eye on to see how he develops during his career at Iowa.
Read full article