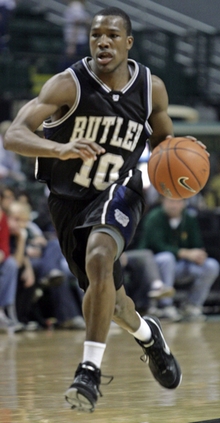 Joey Whelan
@DraftExpress
The best prospect on the floor may have been Butler point guard Mike Green, who is slowly emerging as the Jose Juan Barea/Dashaun Wood style floor general extraordinaire that seems to pop up every year here. Green was terrific running his teams offense today, coming up with 10 assists to go along with 13 points and 8 rebounds on 3-8 shooting, but was just as impressive with the leadership skills he showed on and off the court directing his teammates from the bench, clearly something that is in his blood with how natural it comes to him. He was very good in transition, was effective setting screens and making his teammates better, changing directions well and using his strength to get to the hoop, and set the table in a variety of ways, particularly with smart post-entry passes. He also played solid defense and looked very intense throughout. While his physical tools or perimeter shooting ability may not be ideal, there is no question that he is one hell of a player.
Read full article

Joey Whelan
@DraftExpress
Butler owes much of its strong start this season to the play of one of the countrys top backcourt duos in Mike Green and A.J. Graves. Green in particular has stepped up his play this season, leading the Bulldogs in scoring, rebounding and assists, while managing the bulk of the point guard responsibilities. Showing that there is nothing mid-major about his game, Green has had a slew of strong showings against high-major teams this season, including 20-point outings against Virginia Tech, Texas Tech and Florida State.

Despite Butlers offensive efficiency and team oriented style of play, Green gets most of his shots off in isolation situations where he is taking defenders off the dribble, as he is his teams most creative player. He has a solid first step and pretty good quickness for the collegiate level, which can definitely get him places against the type of competition he usually faces right now. Green is a very crafty player, strong, tough and instinctive, with great timing and ball-handling skills, and relying on an array of moves to break down defenders. The senior has shown a real ability to change speeds effectively while mixing in spin moves and crossover dribble moves. Once in the lane, he shows solid body control and a great ability to shield the ball with his body. Despite his lack of size, Green is surprisingly good at finishing with contact, but his lack of leaping ability doesnt allow him to elevate against bigger defenders.

Green has improved his perimeter shooting this season. A career 32.9% shooter from beyond the arc in his first three seasons, Green is shooting just a hair under 40% from deep this year, although on a limited amount of attempts (2.5 per game). He has solid shooting form and a fairly quick release, but at this point is solely a catch and shoot threat. Green has shown very little ability to shoot off the dribble and almost never pulls up from mid-range. It seems as though if he isnt catching and shooting from the outside he is trying to finish around the hoop at all costs. While this aggressive play draws plenty of trips to the foul line, it does result in several offensive fouls and poor shots.

In the transition game, Green has his ups and downs. He doesnt have blazing open floor speed when handling the basketball and as a result gets his shots blocked or altered from behind on occasion. He lacks that second gear to pull away from pursuing defenders. Green does exhibit good court vision on the break, often able to hit teammates in stride for easy looks around the basket. The transition game is where a good bulk of Greens nearly five assists per game come from, as hes extremely smart and savvy here. As a point guard, Green has a tendency to take some excessive risks at times, but he seems to show a pretty solid mix between scoring and playmaking, even if he at times looks for the former more than the latter.

Defense is a cause for concern at the professional level with Green. His height allows taller perimeter players to shoot over him with a fair amount of ease and his struggles to close out quickly makes him a potential liability against sharpshooters. He also has a tendency to lose track of his man when in transition, something that allows for a lot of open spot up looks for opponents. In isolation situations Green might lack a bit of lateral quickness to effectively guard some perimeter players at the professional level on a consistent basis; his quick hands though allow him to come away with over a steal per game. What is impressive about Greens play is his ability to pull down six rebounds per game, thanks to his hustle, strength, timing and anticipation around the basket.

The biggest strikes against Green from a professional standpoint revolve around his average physical tools. At 61 and around 180 pounds, he has a solid build, but is somewhat undersized for the NBA. While other smaller guards can combat their lack of size by being lightning quick, Green is just average in this category compared to NBA point guards. Hes also not terribly explosive, getting into some trouble when trying to finish against bigger players in the paint. He shows a hard-nosed style of play when attacking the rim; often seeking out contact (he averages nearly eight free throw attempts per game), but his inability to elevate over interior players diminishes his productivity in the lane, and leaves some question marks about how his game will translate to the much bigger, longer and more athletic NBA.

All in all, Green is having his best season yet for the Bulldogs, providing a little bit of everything on the offensive end. In his last game against Youngstown State he missed out on a triple-double by two rebounds, which shouldnt be too shocking when you look at his per 40 pace adjusted statistics (19.7 points, 7.8 rebounds, 6.3 assists). At the end of the day, though, Green is going to have to endear himself to scouts through his play in the NCAA and pre-draft camps to have a chance at catching on with a team after this season, as his upside wont be what does it for them. Green will likely get strong consideration for the Portsmouth Invitational, and could continue to make a name for himself there. He will end up playing professionally somewhere, and will find plenty of success, the only question is where.
Read full article