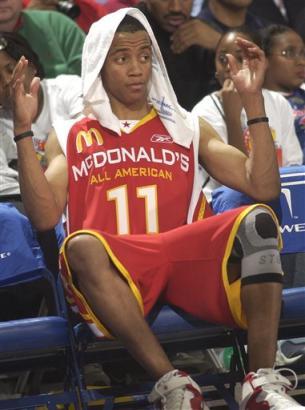 Matt Williams
@DraftExpress
Overview: An undersized shooting guard (6-3 in shoes) who has become a very talented combo only two years after leaving Lanier High School for the NBA Draft. Has incredible quickness and leaping ability. Runs the floor as fast as anyone in the game. Isnt very strong, but has put on some weight since entering the League. Has fully transitioned his offensive game to the NBA, and is one of the most efficient guards youll find. Won the NBA Most Improved Player Award after coming into his own in his second year pro. Still needs to develop his point guard skills, but the former second-round pick has already vastly outplayed his draft slot. Has the potential to be a great player due to his age and rapid development.

Offense: Gets almost a third of his offense in transition, a testament to his speed. Another third comes from pick and rolls, with the final third coming from spot ups and isolations. Has become a very dynamic scorer early in his career. Can spark fast breaks by himself. Still trying to find his range. Has improved his shooting stroke, but isnt always consistent. Could try and hammer out his footwork to avoid rehashing his mechanics. Gets to the rim more often than he pulls the trigger from the outside. Only 4% of his field goal attempts came from beyond the arc in 07/08. Quick first step and impressive crossover allow him to get into the lane without a lot of trouble. Goes to the line at a good rate and shoots a respectable percentage. Capable of driving and finishing with either hand, although hes better with his right. Gets creative when finishing at the rim and displays great leaping ability. Good pull up jump shooter from mid-range. Needs to learn to keep the same rhythm on his set shots that he does on those off the dribble. Will turn the corner on pick and rolls with little trouble. Good offensive rebounder for his height. Could stand to work on his point guard skills, although hes not turnover prone at all. Will need to show he can handle more minutes running the offense, something that he did infrequently up until 2009.

Defense: A mediocre defender, as he lacks both size and length at the shooting guard position and isnt aided in the least bit his poor fundamentals. Plays too many minutes, which likely hampers his effectiveness. He tends to bite on every pump fake and only occasionally will get into an aggressive stance. He does have excellent lateral quickness and is highly adept at getting into the passing lanes, making him fairly effective when asked to play pressure defense. He is also a fairly solid rebounder considering his size.
Read full article

Strengths
Physically, Ellis has excellent size for the PG position at 6-3 and a good frame to put on more weight. His main draw is the fact that he's an outstanding athlete, being extremely quick and smooth in the open floor with a dynamite first step. He gets into the lane at the high school level whenever he pleases, elevating off one foot in the lane and hanging to finish fearlessly and creatively at the basket. He is very quick off his feet.

Ellis is a tough player who doesn't mind taking contact at the basket and still usually finishes strong, sometimes just rising over the top of his opponent and throwing down a strong dunk. He might struggle initially a bit in his first year because he is fairly skinny, but this shouldn't be too much of a concern once his frame fills out a bit.

Offensively, Ellis is an excellent one on one player. He excels in the in the triple threat position and can get his shot off in many ways, even in tough situations (for good and for bad). His first step is excellent, but so is his 2nd and 3rd. His handle is just average for an NBA point guard at this point, but it's still very advanced for a player his age and will get better as long as he continues to work on it. His crossover is strong, and he's good at changing directions, being able to step back quickly and elevate for a pull up jumper. He gets to the line an awful lot as he has no problem putting the ball on the floor and going all the way to the rim, but he also combines that with excellent shooting skills to make him a very tough guard.

Ellis is a dead-eye shooter (or at least as much as you can be as a high school player) who can score from anywhere on the floor. He has great elevation on his jump shot, and hits the 3 ball at a very good clip, especially in rhythm or off the dribble, but not so much on the catch and shoot (think Stevie Francis in this aspect). His stroke is smooth and effortless, and his mechanics look good.

Weaknesses
He appears to be the closest thing we've seen to Dajuan Wagner since Wagner himself. He loves to dribble and dribble and dribble and then dribble some more. AAU ball has basically left him no grasp or comprehension of team basketball or fundamentals, and he probably wouldn't understand what's wrong with that if you tried to explain it to him.

His biggest problem for the short and possibly long term is that he has no NBA position. He's a 6-3 SG with absolutely no PG skills whatsoever. That will limit his potential to contribute minutes initially unless he ends up on a horrible team. In the long term, though, he might not have the instincts or mentality to even become sufficient in this area. When he does try, his passing skills are average to below average. He forces the issue constantly, freezing out his teammates and showing absolutely no interest in getting anyone else involved. Although he is very young, his basketball IQ appears to be limited at this point, running into brick walls time after time while his teammates wave their hands and shake their heads in disgust. He does not appear to be interested in making an assist unless it's of the Sportscenter top 10 variety. He will often bring the ball up the court and immediately jack up a shot, before even looking in the direction of his teammates. The concept of running set plays is completely foreign to him, not being capable of doing anything in a half-court offense at this point except create his own shot off the dribble or drive and dish after drawing a crowd. He looks disinterested in what's happening around him unless the ball is in his hands, as his off the ball movement is extremely poor.

The release point on his jump shot is inconsistent because of the lift he gets on his J, and therefore his shot can be a little streaky at times. He shoots it different every time, meaning he'll sometimes miss very badly. As noted above already, he does not excel on the catch and shoot, but what he gets into a groove during a game he's absolutely lights out.

Although most scouts I've talked to about high school basketball prospects don't really seem to care about this, his defense is horrendous. Ellis puts absolutely no effort into playing on this side of the ball, and just doesn't seem to understand the importance of stopping his man. He gambles on steals (he can be very quick to get out in the passing lanes), gets lost on rotations, gives up on plays completely once he gets beat, gets torched on the perimeter in man to man defense and refuses to rotate or play any type of off the ball defense. He did show some glimpses of potential in the all-star games when his back was against the ball and he had to perform well to have any shot at being able to declare for the draft, but nothing when he had the choice. He's got all the tools to be an excellent defender if he puts his mind to it, but he has to put his mind to it first.

His intangibles are also somewhat questionable. Ellis has consistently shown a poor attitude and immaturity, pouting when things don't go his way or when the ball isn't in his hands for more than 5 seconds. He refused to shake anyone's hand at the end of the McDonalds game, because he was mad at his coach for not giving him more minutes at the PG spot (see links). His body language on the court looks very poor at times, while his quotes in the media make him look like an extremely cocky and arrogant young man. If he's already so full of himself at this point, when basically no one outside of NBA draft circles and Mississippi State fans knows his name, what's he going to be like in 5 years?

Competition
Ellis was scheduled to play at the Roundball Classic in Chicago (see links) but cancelled at the last minute. About a week later, he had a very poor showing at the McDonalds All-American game (see links) with 8 points, (3-10 FG, 1-5 3pt, 1-3 FT), 3 rebounds, 2 assists, 2 steals, 1 TO, 4 fouls in 17 minutes. He was scheduled to play in New York at the Jordan Classic, but cancelled here too because of some type of injury. In April he played at the Hoop Summit and had a fairly average showing here too, with 13 points, 4 rebounds, 5 assists and 5 turnovers in 27 minutes. He had knee surgery shortly afterwards, and is now working out preparing for the draft at IMG academy in Bradenton, Florida.

Outlook
Ellis has hired an agent already, so he is in the draft no matter what. He probably wasn't going to be eligible for college anyway, for academic reasons or others. Someone could fall in love with him as a project PG because of his athleticism and scoring ability, making him a late first rounder somewhere in the late teens or in the twenties, but he could just as well fall into the 2nd round. He WILL look outstanding in workouts if he puts his mind to it; there is little doubt of that.
Read full article

Rodger Bohn
@DraftExpress
While Monta was impressive today, I'm still not sold on him as a point guard (and neither are the scouts we talked to apparently). He did a good job handling the ball and knocking down outside shots, but had quite a few turnovers and didn't look to be the best decision maker. Monta has very nice form on his shot, good lift, and good range. He also did a very good job today on the defensive end by playing good man-to-man defense and reading the passing lanes well. Personally, I think that Monta made it clear over the past few days that he is definitely a better NBA prospect then Louis Williams right now. Let's see how that carries over tomorrow to the game itself.
Read full article