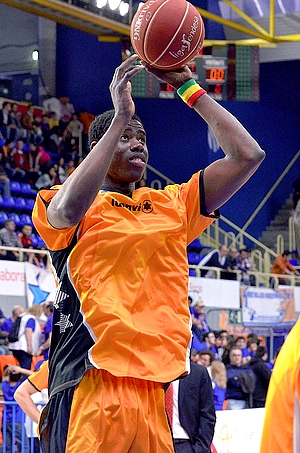 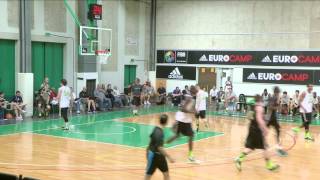 Discovered at a basketball camp in Rufisque, Senegal in the summer of 2010 by David Sanz, a coach with Basket Torrejon, Moussa Diagne arrived in Spain in the spring of 2011 at the age of 17, having barely played any basketball prior to that. He got his first taste of European hoops as an amateur in Spain's 4th division for Torrejon and competing in local junior tournaments where his size, athleticism, and instincts earned him a long term deal with ACB team Fuenlabrada, who purchased his rights, the same team that produced Gustavo Ayon and Bismack Biyombo. 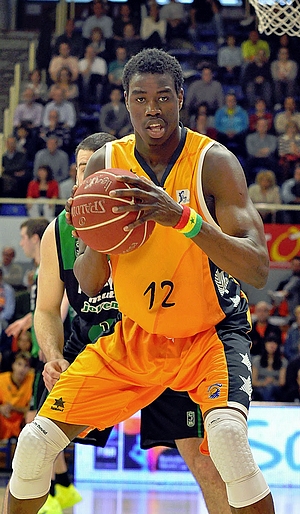 Diagne made his ACB debut a year ago, but appeared in only two games with Fuenlabrada's 1st team, spending the majority of the year playing for Avila in the Spanish 3rd division. Finishing as the best per-minute rebounder and top player in defensive rating in that competition, Diagne was granted an opportunity to carve out a niche in the ACB this season, and planted himself firmly on the radar of international scouts with his play in his first real test against high-level competition, averaging 3.6 points and 4.7 rebounds over 14.8 minutes per-game.

The intrigue surrounding Diagne is obvious on first glance. Standing a shade under 7-feet tall with an outstanding wingspan, reportedly measuring 7-5, he has terrific size for a center prospect. He'll need to continue adding strength to his impressive 230 pound frame, but compensates with terrific speed and enough explosiveness to make good use of his length as a finisher and shot blocker.

At this point, Diagne's strengths and weaknesses as a prospect are fairly well defined. Combining his physical attributes with a tremendous motor, he ranks among the top-six players in one of the top leagues outside of the NBA in per-minute rebounding and shot blocking.

Very active with his feet, Diagne pursues the ball aggressively off the rim with reckless abandon on both ends, averaging a tremendous 12.9 rebounds per-40 minutes pace adjusted. Despite his lack of strength, Diagne shows good toughness rebounding in traffic, often getting a hand on the ball even after getting boxed out.

Diagne is an effective shot blocker for much the same reasons that he's a good rebounder. He goes after every shot attempted in his general vicinity, for better or worse, and has even come up with a number of chase down blocks running down smaller players in the open floor over the course of the year.

Aside from his rebounding and shot blocking, Diagne is fairly limited, but has a number of good habits that leave some room for optimism.

Defensively, Diagne, like many young, inexperienced shot blockers, is extremely foul prone. He has fouled out of 6 games this season and averages 8.1 fouls per 40 minutes pace adjusted due to how frequently he bites on fakes and his general lack of discipline, fundamentals and polish. Diagne's size and length make it easy for him to bother shooters when he goes straight up inside of closes out away from the basket, but his lack of strength makes it difficult for him to hold position on the block against more physically mature and experienced back to the basket scorers. He flashes nice lateral quickness, and plays with plenty of intensity, but just isn't quite polished enough to make the most of his tools at this stage.

On the offensive end, Diagne finds the vast majority of his scoring within a few feet of the rim in catch and finish situations. Possessing decent, but not great, hands, Diagne does a nice job cutting and rolling hard to the rim playing off his teammates and generating second chance opportunities crashing the boards. Finishing at a 63% rate around the rim, the promising young center looks to dunk anything and everything inside.

Showing little in the way of footwork and post moves, Diagne's offensive skill level is still very raw. He is not a threat away from the basket at this stage, and his 61% shooting from the line reflects his lack of great mechanics and touch. As much room as Diagne has room to grow offensively, he has a good grasp of his limitations for the most part. He may shuffle his feet from time to time or look awkward trying to make something happen late in the shot clock, but he rarely tries to do too much, focusing on setting screens, crashing the rim, and finishing strong in close.

Looking towards the 2014 NBA Draft, Diagne is among the more interesting draft and stash prospects whose name popped up on this year's early entry list. His age, lack of experience, and the fact that he's already contributing playing against quality competition leave plenty of room for optimism that he'll continue to improve in the coming seasonsas long as he's indeed actually the age he's listed as, which is somewhat of a subject of controversy in Spain. He gained plenty of exposure this season, and while he may be a few years away from contributing at the NBA level, it wouldn't be at all surprising to see a team invest a late pick in his long-term potential, even if he is indeed a little older than he's listed as.
Read full article