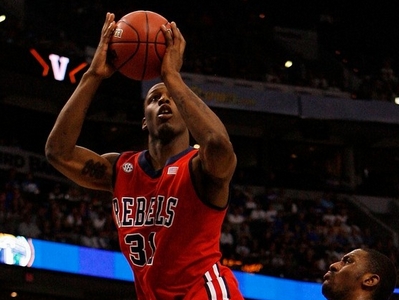 While Terrico White emerged as Mississippis best freshman, power forward Murphy Holloway was not far behind in terms of contributing to the success of his team in his first season in Oxford. Holloway lived up to his status as one of the top 100 high school players in the country, posting averages of 8.4 points, 6.6 rebounds, and 1.2 assists per game. His numbers per 40 minutes pace adjusted, however, were even more impressive, as he averaged 14.8 points, a whopping 11.7 rebounds, and 2.1 steals. Though he has a lot of work to do before achieving his potential at the collegiate level, Holloway is definitely a player to watch, as he could easily develop into a solid NBA prospect in time.

At 67 with a sturdy 225-pound frame and a big wingspan, Holloway has the physical attributes to be dominant in the post at the collegiate level. He is also a stellar athlete, combining explosiveness around the basket with good quickness in the open floor. At just 6-7, though, it is unclear whether he will able to translate his effective style of inside play against higher caliber NBA big men . Therefore, scouts will be watching to see if he can further develop his perimeter abilities at the collegiate level. After all, he was billed as a combo-forward coming out of high school, and being only 19 years old, shows potential to develop in this area.

On the offensive end, Holloway is very much a face-up power forward at this stage in his development. He is most effective scoring off of offensive rebounds and around the basket. His 5.3 offensive rebounds per 40 minutes pace adjusted ranked him fourth overall of qualified prospects in our database last season, which is impressive to say the least. His motor on the offensive boards is relentless, chasing every missed shot, even if his fundamentals in this area could still improve. He shows nice touch around the basket, as well, and though his footwork is still somewhat limited, he has quick feet in the post and looks like he will get better in the future.

Moving away from the basket, he shows tremendous potential, but he must improve considerably if he wishes to play on the perimeter at the collegiate and professional levels. He has a good first step, which allows him to beat his man on the perimeter and slash to the basket. His shaky handle stunts him here, though, primarily due to the fact that he goes left almost exclusively. With that said, he has better ball handling abilities than most young big men, which leaves room for optimism for the future considering his excellent athleticism. Similarly, his decision-making and court awareness must get better as well if he wants to maximize his potential off of the dribble. Far too often he puts his head down and attacks the basket without seeing the defense, leading to turnovers and bad shots.

Holloway showed flashes of developing into a solid spot-up shooter, but he must continue to improve in the future. His form needs considerable work, as it is far too slow and deliberate. His inconsistent release point and the fact that he shoots the ball on the way down certainly does not help him out either. In the future, he must prove to scouts that he has collegiate three-point range, let alone NBA three-point range. Though he shows potential as a spot-up shooter, he still has work to do before he can consider his jump shot a reliable, effective, and efficient part of his offensive repertoire at the college level.

On the defensive end, Holloway is just average and shows mediocre fundamentals. As a post defender, he lacks focus and sometimes lets his man establish deep position. As good as he is rebounding the ball on the offensive end, his lack of fundamentals hurts him significantly on the defensive boards, as he must do a better job boxing his man out on every possession. This is something that he can improve immediately. He did not play much perimeter defense last season, but displays solid lateral quickness, which should aid his transition in the future. Despite his deficiencies on the defensive end, Holloways combination of size, athleticism, and length suggest that he has the potential to develop into a solid defensive player in the future. Only time will tell, however, and next season he must continue to improve.

Holloway has much work to do before establishing himself as immediate NBA prospect, even if his future looks bright thanks to his rare physical tools and terrific motor. Undersized for the post and not skilled enough for the perimeter, he must continue to develop his skill set, primarily working on his jump shot and ball handling abilities. Knowing his limitations is important, as well, and next season, he must improve as a player while helping Mississippi win games. If he can continue to improve and expand his skill level on both sides of the ball, he will not go unnoticed by scouts.
Read full article