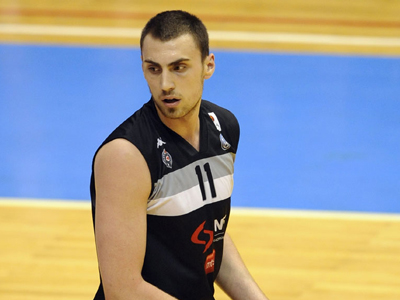 Solidifying himself as a NBA prospect with a strong showing at the 2013 FIBA U19 World Championship, Nikola Milutinov has enjoyed a resurgence of sorts this season, averaging 10.1 points and 7.7 rebounds per game as a regular start for Partizan in the EuroCup, Adriatic League, and Serbian League.

Earning a spot on the Serbian U16 National Team in 2010 and making his Adriatic League debut for Hemofarm in 2012, Nikola Milutinov emerged as a prospect all at once during the 2012-2013 season. Moving to storied Serbian power Partizan Belgrade prior to that season, Milutinov was thrust into an important role in the Euroleague at the age of 18. Though he averaged only 2.3 points and 1.8 rebounds over 9.5 minutes per game, the young Serb's status as one of the youngest players competing at the highest levels of European basketball earned him some buzz, which snowballed into a spot among the top prospects in his age group after he posted a PER of 28 at the 2013 FIBA U19 World Championship.

Struggling with a knee injury the lingered for much of last season, Milutinov took a bit of a step back in 2014 even though he started 42 of 59 games for Partizan and saw his role expand significantly. Not competing internationally last summer, the now 20 year old big man came into this season with healthy legs, and it showed. Taking on a significant role on a balanced Partizan roster, Milutinov finished the EuroCup and Adriatic League seasons ranked among both competition's top offensive rebounders and most productive players under the age of 21.

The promising center's productivity is based largely on his impressive physical tools at this stage. A true 7-footer with nice length and terrific mobility, the Novi Sad native unquestionably looks the part of an NBA big man. Able to play effortlessly above the rim, finish lobs, and compete for rebounds in traffic, Milutinov is a very solid athlete for his size. Though he could stand to get stronger, he's one of the more impressive draft and stash candidates available in 2015 from a physical perspective.

Offensively, Milutinov functions as one of Partizan's primary post up threats, but also does a lot of his work moving without the ball, rolling to the rim in the two-man game, and creating his own opportunities on the offensive glass. An energetic player with a good feel for the game, Milutinov isn't an overly polished scorer, but he knows how to use his size to his advantage establishing position inside and using decisive drop steps to take advantage of smaller players on the low block one-on-one. Lacking a go-to-move and not adept at scoring against bigger, more athletic defenders consistently one-on-one when he has to make more than a quick move, Milutinov still has room to improve his post up game.

At this point in his career, Milutinov does his best work finishing around the rim. Possessing good hands, the young center is a big target who doesn't hesitate to try and elevate over and dunk through contact. Shooting 65% in finishing situations according to Synergy Sports Technology, Milutinov appears to have the tools to be a reliable catch and finish option at the NBA level, even if his touch isn't outstanding.

His physical tools and motor allow him to contribute in other areas offensively as well. Averaging a phenomenal 5.8 offensive rebounds per-40 minutes pace adjusted, Milutinov creates extra possessions as well as almost any player in this draft. Similar to his numbers as a finisher, Milutinov's rebounding stats are buffered by his mobility, aggressiveness, and willingness to initiate contact.

Aside from his interior scoring ability, Milutinov flashes some promise as a jump shooter. He's made 38.5% of his catch and shoot jump shots this season, and though he doesn't possess outstanding touch from the midrange and made only 62% of his free throws, he appears to have some potential as a big man who can step to the elbows to add a dimension to his team's offense. Though he isn't exactly Vlade Divac, Milutinov is also a solid passer, as his fundamentals and understanding of the game allow him to find cutters when the defense is scrambling.

Aside from his limitations as a go-to option offensively, Milutinov's main weakness as a prospect is his lack of shot blocking ability. Though he has solid length, his 1.3 blocks per-40 minutes pace adjusted would rank among the lowest marks for a center in this draft class. More fluid than explosive, his lack of lift shows on the defensive end at times, and also renders him as more of an area rebounder on this end, as he tends to box out instead of pursuing blocks or rebounding out of his area.

Milutinov is a solid defender, but has room to improve as well. Possessing good fundamentals and an understanding of positioning on the perimeter and when defending the pick and roll, Milutinov wouldn't be seeing the minutes he already does at the EuroCup level if he wasn't a sound team defender. Getting pushed around a bit by stronger players when guarding the post, as his frame fills out, his fundamentals on this end, toughness give him the potential to hold his own at the NBA level.

Making his mark this season against some of the highest quality competition outside of the NBA, Nikola Milutinov has regained some of the momentum that made him such an intriguing prospect coming out of the summer of 2013. His combination of size, mobility, and roleplayer potential make him one of the more intriguing international prospects in this draft, and it would not be at all surprising if Milutinov was one of the first draft and stash options off the board in the second round of the 2015 NBA Draft.
Read full article