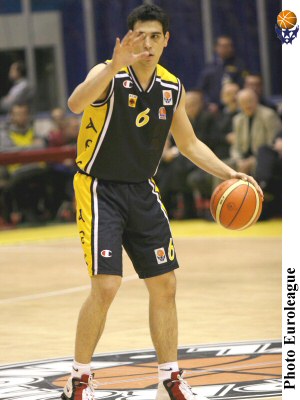 Strengths
Zisis is one of the most experienced players in this upcoming NBA Draft. This season is his fourth in the Euroleague, while he has already been a star for all the National Teams of Greece (Cadets, Juniors, Young Men and recently National Team). He is an excellent player to depend on in the game's last minutes. He is very steady, he has shown extensive maturity in his game decisions and during the past two months he has been successfully transferred from a starting shooting guard to a starting point guard.
As a point guard, he can immediately provide a team with certain characteristics, that only a few players in Europe can provide. He separates sentiments from the game needs and looks patiently for his teammates. His passing is on the rise and is already above average, while his mind is always clear and his body ready to contribute. Like most of the modern European point guards, he is very smart, he is a very good defensive player, a solid presence during the game, he challenges all opponents and always tries to find a way to help his team.
But after his recent transfer from the SG spot, what really makes him special is his ability to finish all his scoring opportunities and he is a nearly excellent three-point shooter. This is a very important characteristic of his games and separates him from most good European point-guards.


Weaknesses
Physically he needs much work. Zisis has never been characterized as an athletic player. In fact, he seriously lacks athleticism, while, despite his recent attempts to bulk up, he needs to spend more and more time in the gym. In comparison even to high-school players who are selected in the NBA Draft, he seems like a skinny player and bases his play in European characteristics, such as shooting or mental strength.
Moreover, his passing game, despite being tremendously good for a recently-switched point guard, has not yet reached the ideal level, in order to make him a clear-cut point guard. However, this should not be a headache for any team to select him, given his high-demanding character.
The only question is whether he will ever become as quick as he needs to be, in order to defend NBA running PGs. This should take a scout some weeks to realize, as he does not really seem to be the speedy type of the point guard and his playmaking skills are more of the Euro-type.


Competition
Playing every week both in the Euroleague (he paces AEK in assists with 6.2 apg and also averages 10.0 ppg in nearly 32.0 mpg) and in Greek A1 (12.5 ppg, 4.0 rpg, 4.2 apg. 1.0 spg in 27.0 mpg) is a good task for him and has got used to it for the past four seasons. The fact that this is his fourth straight season as a starter makes him one of the most experienced players in this year's draft, as his maturity reminds of a very skilled college senior (but with slightly higher experience, as he has been a player of the Euroleague for the past 4 seasons).
Look for his stats to grow even more, as his coach looks for him to pass the ball even more. He seems capable of reaching a 7.0 apg season. Last Thursday, he posted a Euroleague career-high 13 assists against European powerhouse Maccabi Tel Aviv.


Outlook
Automatic entry for the NBA Draft in 2005 as a 1983 prospect, although he will not be 22 until September 2005. Possible second round pick, with potential to play in the NBA, after one more season in Europe. If AEK does not make it to next season's Euroleague, he may consider joining the NBA immediately. A possible pick for National of Greece team in the Eurobasket of 2005, with a remaining question on the position (PG or SG).


Comments
This profile has yet to be completed.

Facts
Zisis scored a National Team career-high 18 points in the heavy loss of Greece to Lithuania in the group round of the Olympic tournament in August 2004. He was the top scorer of Greece in that game. As a substitute to veteran shooting guard Nikos Hatzivretas, Zisis averaged 7.0 ppg in about 18.0 mpg.
Read full article