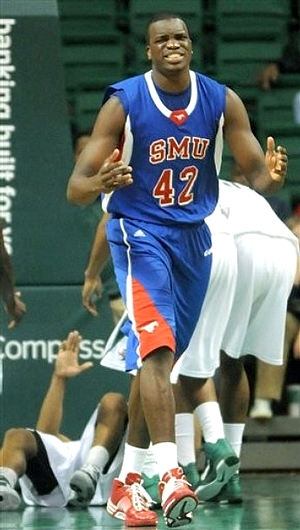 Steadily improving his game his four years in school, Papa Dia is finally making a case as a prospect in his senior season, where he's been extremely productive and has flashed some intriguing skills. A bit old for his class at 24, Dia was brought to America five years ago (by Amadou Gallo Fall) to attend prep school, prior to which he lived in his native Senegal.

Standing 6-9 with a decent frame and good length, Dia possess impressive mobility and agility for his size, to go along with respectable power and explosiveness. His movements and skills look somewhat crude at times, but he has good overall coordination to go along with excellent hands, while he also shows a pretty good overall feel for the game on both ends of the floor.

On the offensive end, Dia has emerged as a go-to scorer for the Mustangs this season, operating primarily out of post-ups and pick-and-rolls. With his back to the basket, Dia possesses unpolished but rangy footwork, using simple drop steps and spin moves along with the occasional counter move. He shows pretty good touch and has a solid hook shot in his arsenal, but he's incredibly reliant on his left hand and moves off his right shoulder in general, something that will be far more problematic at the next level, where this aspect of his game would likely have significant trouble translating initially.

While competing in a solid conference, Dia isn't performing well against a bunch of nobodies, but SMU's out-of-conference schedule leaves something to be desired and Dia isn't often tested against NBA-caliber big men, something his skill set could very well have problems with.

The other area Dia does a lot of his damage is off pick-and-rolls and cuts to the basket in general, something he excels with due to his good body control and very good hands. He does a solid job maneuvering around the rim to get off high percentage shots, and shows good awareness and decision-making in this area, leading him to rank in the 97th percentile of finishes around the basket in the NCAA according to Synergy. Dia also does a very good job slipping screens and making reads off pick-and-rolls here, having a good feel for this area of the game and reading situations well.

One of the most interesting aspects of Dia's game going forward is actually his jump shot, something that was used infrequently at SMU due to their reliance on him as an inside scorer. Dia hit an impressive 13-of-30 three-pointers as a senior prior to not making any in his three seasons prior, while he also shoots a solid 75% from the free-throw line. His shooting form isn't the prettiest around, but he has a high and relatively quick release to go along with consistent mechanics, while he seems to have a good ability to just put the ball in the basket.

Combining Dia's pick-and-roll prowess with his underused shooting ability presents an intriguing package from an NBA perspective if it can be nurtured, and this will likely be what NBA decision-makers are most curious to see from Dia in the pre-draft process. It's also worth noting that Dia's commitment to doing the offensive duties SMU's offense required of him rather than showcasing his jumper, which is more attractive from an NBA standpoint, is probably a good indicator of his character and coachability.

On the defensive end, Dia has a decent package of tools, though his fundamentals are still coming along. He doesn't show great concept of leverage or using his hands in the post, often giving up position and relying on his shot-blocking ability to contest, but he's very active and focused in moving around and sticking with his man, showing a good effort level overall. His perimeter defense is actually a bit further along considering his size, as he shows solid lateral ability and does a good job getting his hand up to contest shots, though his polish could still use some work.

On the glass, Dia does a solid job boxing out but shows very good pursuit abilities of rebounds, tracking caroms off the rim pretty well and often going out of his area with his good mobility. He gets a lot of opportunities for easy shots by grabbing rebounds on the offensive end, showing especially good pursuit after his own close misses.

Looking forward, Dia has some ground to make up in his exposure as a late bloomer whose team played an unimpressive schedule this season, but he possesses some interesting qualities teams look for in role playing bigs. His learning curve and work ethic would appear to be strong pluses to those evaluating him, though his advanced age tempers that somewhat.

How he develops his perimeter jumper will likely have the biggest bearing on his long term success, but he should have ample opportunities to get looks in the league, starting with the Portsmouth Invitational Tournament in a few weeks. He has work to do from a draft perspective, but could impress in workouts and have a team elect to take a flyer on him in the second round.
Read full article