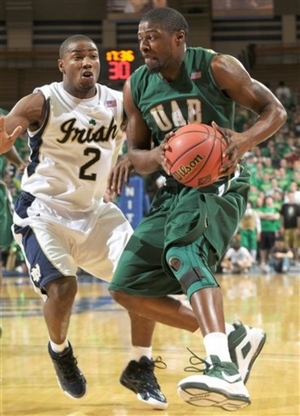 Joseph Treutlein
@DraftExpress
One of the biggest surprises of the Portsmouth Invitational Tournament, Paul Delaney III did an excellent acquainting himself with the many NBA talent evaluators in attendance here, to the point that he began to receive mention as a sleeper pick to slip into the second round by the time the camp was over.

Delaneys biggest assets clearly revolve around his excellent physical attributesstanding a solid 6-2, with a freakish 6-9 wingspan, and a chiseled 197 pound frame that hes not afraid to utilize. Hes an excellent athlete, showing a terrific first step, great speed in the open floor, and the explosiveness needed to rise up over the top of defenses and finish with an emphatic dunk.

Primarily a slasher in the half-court, Delaney sports one of college basketballs best 2-point percentages amongst point guards, at an outstanding 60%. He takes the ball incredibly hard to the basketbeing better going leftand finishes ferociously once there, thanks to his excellent length, strength and leaping ability. His ball-handling skills are improvable in pure one on one half-court situations, but once he gets a full head of steam, hes extremely difficult to keep out of the lane. Hes at his best in transition, where his end to end speed and excellent body control really shines.

Delaneys point guard skills are mostly a mixed bag at this point, which is not a surprise considering that he doesnt play the position full time for UAB. One on hand he shows the ability to break down the defense and find the open man in drive and dish situations, sometimes in impressive fashion, but his feel for running a team looks underdeveloped at this point, especially in half-court situations. He tends to commit careless turnovers, often looking out of control, and doesnt appear very adept at running the pick and roll.

From a statistical standpoint, his numbers are extremely underwhelming, as his 3.9 assists per-40 pace adjusted would rank 19th out of the 20 NCAA point guards currently projected to be drafted in our 2009 or 2010 mock drafts.

As a shooter is where Delaney needs to improve the mosthe only made 22 3-pointers in 33 games this past season, and sports slow, ugly looking shooting mechanics, that dont leave a great deal of room for optimism in this regard. He only made 1 of 5 attempts from beyond the arc at the PIT, looking very limited shooting off the dribble in particular. Teams tended to go way underneath screens in pick and roll situations in the UAB film we evaluated, which tells you a great deal about what they thought of his jump-shot.

Defensively, Delaney has great tools, as his size, length and terrific lateral quickness gives him excellent potential on this end of the floor. Hes not very fundamentally sound, though, and doesnt seem to consistently put the effort in, particularly with his off-ball defense, but he should be able to develop this part of his game considerably if he chooses to do so. He seems to have excellent anticipation skills and outstanding hands, which helps him get in the passing lanes on a regular basis. Hes also a solid defensive rebounder for his position, again thanks to his terrific physical tools.

Despite his fairly underwhelming college careerputting up so-so numbers on an average teamDelaney was able to make up considerable ground over the past week thanks to his strong play at the PIT. His physical attributes give him some upside to grow into that most NCAA senior point guards outside the first round usually dont have, which may lead a team to give him a chance at making a roster, either through summer league or training camp. Hes a little bit older than most due to redshirting last season after tearing his ACL (and was sporting a fairly big brace on his knee at Portsmouth), but that shouldnt make that much of a difference in the decision making process.
Read full article