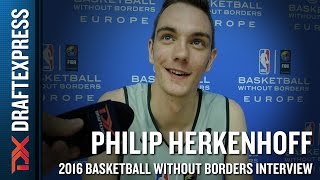 Strengths
-Great size for a perimeter-oriented four man at 6'10. Long arms. On the light side but upper body should fill out nicely in time.
-Very fluid. Can get up and down. Finishes above the rim in space off of one foot.
-Potential as a stretch big. Slow getting into his jumper and a bit stiff in the shoulders but has some touch  36.4% from three in L'Hospitalet. Shows some ability to create space off the dribble although results aren't quite there yet.
-Can grab and go in transition. Attacks closeouts in space. Solid stride length. Wants to score first and foremost but can drive and kick or dish.
-Solid feet defensively when he really digs in. Can hedge and recover or slide a little bit after a switch. Feet and twitch aren't elite but he uses his length to space defend and contest.
-Rangy enough to rotate and block shots from the weak side  1.2 per 40. Solid instincts in the passing lanes  2.8 steals per 40.
-Nice overall combination of tools, fluidity and developing skills.

Weaknesses
-Wide shoulders, but light in the chest and rear. Hips are a bit wide. Needs to get stronger.
-Good not great athlete. More fluid than freaky.
-Very inconsistent shooter. Stiff through the shoulders. Slow getting into his jumper, especially off the bounce. Not nearly as intriguing if he's not shooting it well.
-Capable passer but can go into isolation mode at times. Doesn't always react well to help. Can be a bit turnover prone  3.7 per 40.
-Not the toughest guy around on either end of the floor. Doesn't have much of a post game. Shies away from contact around the rim. Opts for one-legged fallaways rather than exploding to the rim. Only 1.2 free throw attempts per 40 minutes. Gets buried in the post defensively. Doesn't rotate for blocks as often as he could.
-Decent feet on defense but doesn't always get in a stance. A bit stiff in the knees at times.
-Doesn't always pursue offensive or defensive rebounds. Very underwhelming 5.3 rebounds per 40, especially considering his tools. Inconsistent level of physicality and effort on the glass.
-Tends to blend in at times.

Outlook
Herkenhoff had an up and down tournament, showing glimpses of his versatility on both ends for stretches, then disappearing for long periods of time on other occasions. In theory, Herkenhoff is very intriguing and fits perfectly into the modern era of basketball  he has positional size and length, can shoot it a little bit, attack a closeout and cover some ground defensively. With that said, Herkenhoff isn't quite great in one area and will have to become a more consistent shooter to be a legitimate stretch, and a much tougher defender to have value on that end as he's not physically gifted enough to float. When Herkenhoff is playing with aggression and shooting it well, he's a legitimate NBA prospect. Consistency in that area will be key moving forward.
Read full article

Mike Schmitz
@Mike_Schmitz
Philipp Herkenhoff, 6-8, PF, Artland Dragons, Germany, 1999
Strengths
-Skinny, but has a frame that should fill out in time. Long arms
-Fluid and mobile. Has a lot of room for improvement physically
-Very good shooter. Was very consistent with his feet set all well
-Solid feel for the game. Makes the extra pass
Weaknesses
-Needs to improve the quickness of his release
-Not particularly athletic at this very early stage. Needs to improve his explosiveness
-Defensive potential is not clear. Not very tough. Struggles to bend his knees. Gets burned off the dribble quite a bit.
Outlook Skilled future stretch 4-man with a framework of an interesting game. Has a long ways to go but players in his mold are highly in demand.
Read full article