Jonathan Givony
@DraftExpress
Arguably the top prospect seen in Belgrade when combining physical attributes, production and skill-level, Philipp Neumann is yet another intriguing player to emerge from the ever-improving basketball country of Germany. 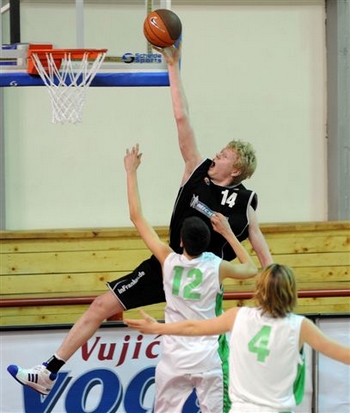 6-10, with a decent frame, nice length and good, but not great athleticism, Neumann has solid physical tools for an NBA prospect, but is far more intriguing due the terrific skill-set he displays.

Showing an uncanny knack for creating his own shot from the mid or high post, Neumann is an excellent ball-handler for his size. He dribbles the ball low to the ground and has amazing body control weaving his way around defenders, being able to drive going either left or right. His long strides made it nearly impossible for anyone at this tournament to stay in front of him, allowing him to get to the free throw line at a very nice rate.

With his nice shooting mechanics, Nowitzki-esqe high release point and good touch, it's not difficult to envision Neumann becoming a terrific threat from beyond the arc fairly soon. He knocked down 50% of the 14 3-pointers he attempted in Belgrade, which is intriguing from a 6-10 guy to say the least.

He also showed the ability to operate with his back to the basket, displaying great extension on his jump-hook shot and very nice touch, lacking some strength at times to get the job done, and not being overly explosive jumping off two feet, but nevertheless showing the willing to playing inside the paint, which is a very good sign for the future.

The amount of offensive responsibility he was forced to shoulder (the rest of Bamberg's squad was extremely weak) made him a bit more turnover prone than you may have liked, even if you never really got the feeling like he was playing out of control.

On the contrary, he appeared to be quite an unselfish player, showing good body language and doing a nice job of keeping his poise when things weren't going his way. He's a talkative guy who seems to communicate well with his teammates and looked willing to take responsibilities, which is always a good thing from a young big man.

Defensively, Neumann puts a good effort in, but may be somewhat stuck in between the power forward and center positions. In terms of his ability to guard the 4, his lateral quickness might not be quite up to par, and he seemed to get lost off the ball at times, although his intensity level and length really shined through with the way he was able to crash the defensive glass and get his hands on plenty of loose balls. He has nice timing as a shot-blocker as well, coming up with 6 blocks in one game we saw in particular. His activity level, smarts and willingness to fight will clearly work in his favor, although it will be a whole different ball game on this end of the floor when forced to compete against players at the senior level.

Neumann is a player who displays many of the characteristics NBA teams look for in a modern day power forward with his ability to space the floor and create his own shot. At the same time, he probably is big enough to see some minutes at the center position considering his solid size and length. Filling out his frame the right way will be important down the road, but that shouldn't be that much of an issue since he just turned 18 years old (yesterday in fact). We'll have to see how Neumann can translate his skill-level to playing against grown men in Europe, but there is a lot to like about him thus far. It wouldn't be surprising to see him on Bamberg's senior roster already next season.
Read full article