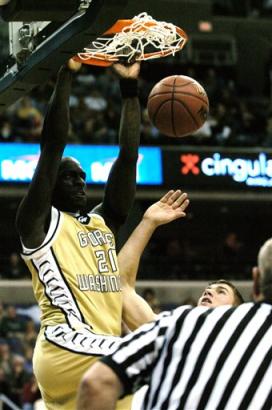 Jonathan Watters
@DraftExpress
In the final game of his senior season, Mensah-Bonsu looked unimpressive against two NBA-caliber big men in Josh McRoberts and Shelden Williams. Clearly not 100% after his knee injury, he was unable to hold his position in the post, and didnt show any skills when he received the ball in the post. Mensah-Bonsu had 2 of his shots swatted away by Williams, who along with McRoberts, pushed him on the other end of the floor. The Duke duo finished with 31 points combined. From what weve seen all year long in the way he has just not improved whatsoever from his junior season, things arent looking good for Pops. Right now he lacks fundamentals on either end of the court, and much of his college production resulted from his outstanding athleticism. Pops Mensah-Bonsu will need to show that he has the potential to develop some skills if he wishes to have a career in the NBA, and he needs to do it quickly.
Read full article

Strengths
Mensah-Bonsu is an explosive and very aggressive athlete. He is an awesome leaper that can really finish strong with authority around the rim. Pretty much a highlight dunk waiting to happen and potentially a future slam dunk contest participant if he ever makes the league.

Mensah-Bonsu is slowly figuring out how to maximize his athletic ability; he runs the court very well for a post player and knows how to get easy buckets on offense. In the post, he is very quick and hard to handle. He does not take a lot of time to get his shot off and if he gets position in the post, he will shoot quickly. When he is quick and decisive he is very hard to defend down low. He is good at getting his shot off in the post and with his jumping ability and length, he knows how to rise up over defenders and finish.

Mensah-Bonsu is a very good shot-blocking prospect because of his leaping ability, dexterity and overall quickness. He is also an improving rebounder in the post, he is learning how to use his quickness and length to get rebounds in the paint.

I like Mensah-Bonsu's intensity on the court as well. When he throws down a strong aggressive dunk, he lets you know about it. When you watch him play, you can see he enjoys competing and being aggressive. He will go after loose balls and will hit the floor if need be, that is impressive for a player his size because that is a long way to the ground. Along with his great athletic ability, I think his mentality and assertive play is what makes Mensah-Bonsu a very good NBA prospect down the road. Off the court he is supposedly a very nice and likeable kid as well.

Considering how long he's been playing basketball for (not long) along with the fact that he is extremely athletic, expect the word upside to be brought up next to his name plenty in discussions around him.


Weaknesses
Mensah-Bonsu is still an extremely raw physical prospect, despite his somewhat advanced age. He does not have anything even resembling an around polished game as of yet, seriously lacking in some fundamental skills that he has yet to pick up. He still has some seriously rough edges to his game that he has to smooth out to become a legit NBA player. He has only been playing organized basketball for a couple of years, and that really shows at this point.

Mensah-Bonsu is a skinny player, he is listed at 240 pounds, but plays very thin on the basketball court. His position defense in general is a major weakness of his at this point. He does not always get wide on defense and use his arms and legs properly to properly disrupt on defense. Because he does not gain a wide base, he has trouble boxing out and he gets pushed around in the post. He is an aggressive player and doesn't mind contact, but he has to become a better and smarter rebounder in terms of boxing out and positioning himself. He has improved in that area this year, he has to continue to get better.

On offense, he struggles against physically, stronger defenders and can get
pushed around by almost anyone his size with an NBA body. He uses his quickness on offense, but if he goes up against an equally athletic and/or stronger PF (read: most NBA players) he will have problems. He needs to develop a more well rounded game so he can score in other ways, instead of just getting dunks or scoring 5 feet from the hoop. He has a nice touch around the hoop but his range only goes out to 12-15 feet at maximum, and even that is streaky.

With his skinny build, he will have to learn how to hit the 15 foot jump shot on a consistent basis. On a related note, he is also a poor free throw shooter and just does not look comfortable shooting the basketball. His mechanics need work and he will need to work very hard on this aspect. He will absolutely have to expand his game to really make it at the next level. He is also not a good ball handler; not being able to create anything off the dribble and being a turnover threat anytime he needs to make more than one or two bounces.

Another weakness in his game right now is that he picks up a lot of stupid fouls and cannot always stay on the court because of it. To his credit, his numbers are very impressive considering he only gets 20-24 minutes of playing time a game. However, at the next level, this problem is only going to get worse considering the huge rise in the level of competition. He has a habit of biting on pump fakes in the paint, he pushes off on defense and reaches a lot because he is not in position on defense, while not moving his feet very well because of poor footwork and fundamentals.


Competition
Playing at George Washington in the Atlantic 10, Mensah-Bonsu does not go up against quality competition very often. However, this year they did play
Michigan State and he had 23 points, 6 rebounds and 4 blocks against them.
The game after that was against Maryland, and he only had 6 points, 5 rebounds, but he did have 5 blocks in that game. They also went up against Wake Forest and he struggled and only got 8 points and 6 rebounds. Consistency is a major issue for Pops, which is concerning at this point.

Overall, though, the competition he goes up against in the Atlantic-10 is not very solid, especially in terms of post players. He should dominate a lot more than he does against the players he plays against, especially considering his size and athletic ability. When GW went up against Stevin Smith from LaSalle, the type of player that he will likely face in Chicago should he be invited, he did not have very good games against him. In their two matchups he combined for 20 points (7-18 FG), 20 rebounds, 5 blocks and 5 turnovers in 52 minutes.


Outlook
Mensah-Bonsu has already declared himself eligible for the NBA draft. He is planning on going to Chicago, seeing how he stacks up against some of the other prospects in the draft at his position, and returning to college should he not be able to secure himself a place in the 1st round. In his own words: "I mean, I just want to test the waters, go to camp and see how I do against some of the best players in the country and the world."

Mensah-Bonsu should definitely go back to college if he is unable to work himself into the 1st round (and that will be very tough). He has a lot to improve on, George Washington will have a solid team next year and are capable of making a solid run in the tournament and he'd be able to improve his stock greatly, especially with the impending age limit. He has made progress on the defensive end this year but he still has to improve greatly since his offense is so raw.

With that said, he definitely has the potential to be a 1st round pick from an athletic standpoint down the road. Mensah-Bonsu is easily an NBA athlete at this point and has exceptional quickness and leaping ability for a PF. If he improves his range next year and defense and becomes a more complete player, he can probably play himself into the first round with a good year. This year, the chances of that happening are not particularly high unless he plays extremely well in Chicago. He's expected to return to GW next year and will not be listed on the mock draft unless the situation changes dramatically.

"We have a chance to be a top 10 team in the country next year," Mensah-Bonsu said. "I don't know why I wouldn't want to come back."


Comments
Mensah-Bonsu is a prospect with a great amount of potential. If he improves his defensive footwork and position in the post, he could at least be an NBA body with the right amount of work. He has the potential to be more than that, though. I do not believe he will ever be an effective shooter, it would improve his game overall but I am not sure he will be able to develop a solid outside game.

Jonathan Givony
@DraftExpress
On a team full of individual talent on the college level, Pops Mensah-Bonsu is probably the Colonial with the best chance for success on the next level. He has a nice body for an NBA PF, and some rim-rocking athleticism. Unfortunately, he hasn't developed much since scoring in double-digits as a freshman, and really struggles against bigger players. His basketball IQ and overall skill level need some work. GW is a team that could have pulled off an upset in the first round, but drew a tough draw against Georgia Tech in the first round. Mensah-Bonsu is a guy to keep an eye on for next season, as the Colonials should be the favorites to win the A-10 once again.
Read full article