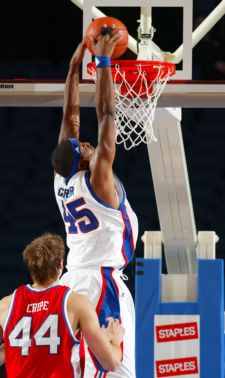 Strengths
Greer is predominantly a post player that runs the court very well. He is best when he is running north-south, and getting easy points in transition.

On offense, he is fairly skilled as he is good at facing the basket and taking slower opponents off the dribble to the hoop. He does a good job rebounding and getting loose balls with his strength and quickness as a post player.

He looks like a post player but played significant minutes as a perimeter player this year. He sets up in the high post a lot and has a solid short jump shot. He uses his quickness and bulky frame to take PF's to the hoop and finish in the paint, at times basically bullying his way to the hoop.

Greer is a built player, with good bulk and a wide base. He is a good rebounder for his 6-7 height because he has strong arms and hands to grab balls off the backboards. He uses his quickness advantage against slower post players and has a wide enough frame to carve out space in the paint to score. If he gets the right position in the post, he can be very effective with his back to the basket, but feels more comfortable in the high post.

Greer expanded his shooting range this season and has become a much more dangerous offensive player. This, along with his added intensity, is why there was a increase from 12 points a game to 18 this year.

Weaknesses
Greer is not a very good shooter from the outside overall, he has nice arch on his shot and a solid release but he is not very accurate or effective. This doesn't stop him from trying, though. Because of this, along with his lack of athletic ability, will make it difficult for him to play SF, basically making him a tweener as far as the NBA is concerned.

Ideally, he would play SF at the next level, but his lack of perimeter defensive skills, quickness and shooting ability changes that. He has improved his shooting a great deal from this season compared to last season, however, I am not sure his limited success as a shooter correlates to success as a shooter in the NBA.

He shoots a fairly bad percentage for a post player as well, mainly because of his tendency to settle for bad shots, as he has never shot over 50% from the field and is around only 60% from the free throw line.

He has moderately good touch from mid range, but overall he is not very consistent from this area. At times, he looks very good shooting the basketball, and other times he looks very bad.

Greer is also a poor defender, he lacks the physical tools and intensity to make up for his lack of size at either the 3 or 4 position. During some plays, he is up and attentive, and in other plays, he looks like he doesn't even care. He is very good at defending the perimeter, as he does not always get out on open shooters as quickly as he needs to and often lacks the quickness to stay in front of his man.

In terms of rebounding, he struggles boxing out bigger and more aggressive post players. If the ball does not come to him, he is at best an average rebounder. He does not always go get the ball or develop the proper position for the ball to come to him. Most of the rebounds he gets are because of his quickness advantage against slower college PF's.

Greer is a below average athlete, for his size he needs to be an explosive athlete to be able to play PF in the NBA and he is not that. He lacks lateral foot speed and does not move well on defense. He can run the court on offense well for a forward, yet he does not use that same energy on defense. He is a very physically built and strong as an NCAA player, but is not extremely quick or agile.


Competition
Statistically speaking, Greer's best games have come against the weaker teams Depaul has gone up against. He started off the season quite well, but faded in the last 1/3rd of the year. Against the better teams he went up against, he was usually not as effective for a variety of reasons. He had 9 points against Louisville on his senior night at home. Against Cincinnati he had 25 points and 9 rebounds at home, but on the road had a very poor game on national TV with 12 points (which came mostly in garbage time) and 7 rebounds on 4-13 shooting. He was dominated in this matchup by Jason Maxiell and was visibly frustrated and even received a technical foul if I remember correct. He has had moderate games this year against Memphis, Marquette and Charlotte. Depaul's out of conference schedule was fairly weak, not going up against even one NCAA tournament team with an at-large bid, so there aren't too many conclusions to draw from here either.

He was a highly regarded recruit out of high school, but was not considered an NBA prospect before this year started after three fairly average years in the NCAA.


Outlook
Greer appears to lack the physical tools needed to play in the NBA. He does not do anything extremely well, and that is not a good thing considering that he is a tweener as it is already. What scares me about Greer is that players like Brain Cardinal or Ryan Humphrey are in the NBA because of their work ethic and intensity; however Greer hasn't shown an abundance of that. Even though he might be a more talented player than those two, he might lack the intangibles to get the same chance they did. Greer appears to be your typical undersized college star.
Read full article