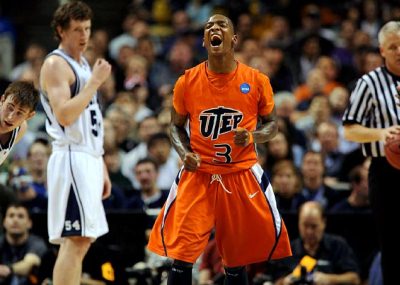 The 2009-2010 Conference USA Player of the Year, Randy Culpepper, enters his senior season at UTEP as one of the most explosive scorers in the college game. With the losses of big men Derrick Caracter, now in the NBA, and Arnett Moultrie, who transferred to Mississippi State, Culpepper will likely continue to carry much of the offensive load this season for the Miners and new head coach Tim Floyd.

Standing at only 6'0 tall and weighing only about 165 pounds, Culpepper played primarily off the ball last season in the role as a scorer, while 6'6 Julyan Stone ran the team from the point guard position. And while Culpepper is an excellent athlete with great explosiveness and elevation, his small stature and the fact that he doesn't appear be a point guard at all will certainly hurt him in the eyes of NBA scouts as they try to evaluate how his game might translate to the NBA level. He'll need to show better passing instincts and more of an attacking game off the dribble this season to prove that he isn't just a gunner.

Culpepper is an extremely effective scorer at the college level, as he ranked eleventh of all players in our database last season, scoring 1.25 points per possession. He has the ability to put points on the board in bunches, as evidenced by his single game highs from last season of 45 and 39 points, where he connected on nine 3-pointers in each game.

While Culpepper's per game scoring numbers didn't change much from his sophomore to junior season, he did make strides in becoming more efficient. He raised his field goal percentage to a solid 47% last season, up from the 41% he shot as a sophomore. This was mainly due to his improvement in finishing at the rim, where he does a very good job of using his elevation and body control to find ways to score. This led to an improved 59% on 2-point attempts last season, which is outstanding for a player his size. This success might be tough for him to translate to the NBA level, however, where he'd face much longer, more athletic defenders in the paint.

Shot selection is still a big issue with Culpepper, despite his increased shooting percentages. He has deep range and confidence as shooter, but he still forces up shots that he has no business taking. The fact that he shot 46% on unguarded catch-and-shoot jump shots last season shows that he has the ability as a shooter, but he shot only 31% overall on jump shots, because so he took so many bad ones. If he can focus on taking better shots and attacking the basket more instead of settling for contested jumpers, he could become an extremely efficient scorer.

As a defender, Culpepper plays with good energy and has the lateral quickness and toughness to defend on the perimeter. He also averaged 1.8 steals per game last season thanks to his quick hands and ability to play the passing lines. The biggest obstacle for him is his size, as he's not a point guard offensively, and he's not big enough to cover 2 guards on the defensive end.

It would be easy to dismiss Culpepper as a prospect due to his lack of size and position for the NBA, but we've seen there is a place for super explosive, undersized combo guards if they're able get into the lane off the dribble regularly and make plays. Culpepper has some potential to fill that small niche, but his mediocre ball-handling and passing skills, and poor shot selection will need to improve for him to have any chance at all to succeed at that level.
Read full article