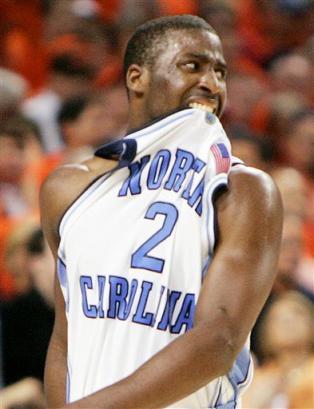 Matt Williams
@DraftExpress
Overview: A lightning quick point guard who is still trying to recapture the individual and team success that he experienced as a collegiate at UNC, and made him a top-5 pick. Won an NCAA championship at UNC as a junior in 2005. His quickness, strength, and explosiveness are ideal even by NBA standards, though his physical stature is only average. Has quickly become a quality NBA point guard, and has the potential to get even better, even though hes been hurt by Charlottes lack of stability from the sidelines. Future success largely depends on whether Larry Brown will try to rein him in, or allow him to play the type of up-tempo basketball that best suits him.

Offense: Operates primarily off of the pick and roll, but also gets some of his shots from spot up and isolation situations. A great pick and roll point guard due to his ability to turn the corner, create passing lanes, and find the open man. One of the best point guards in the League at throwing full court bounce passes. The most impressive aspect of his point guard skills stem from the way he pushes the ball in transition. Very good at getting to an open area, receiving the outlet, and advancing the ball up the floor in a hurry. Capable of turning regular possessions into fast break opportunities. Few players can match his agility, ball handling, and court vision on the move. A poor shooter from behind the 3-point line, which is the #1 thing he will have to improve on to become more than just an average NBA point guard. Could still stand to improve his finishing ability around the rim, which is hampered by his poor size. Tends to drive left when he attacks the basket, and usually gets all the way to the rim. Absorbs contact better than most point guards. Shoots a pretty decent percentage from the line, but could always improve in that aspect of the game. Seems to get going too fast at times, leading to turnovers, but is starting to control tempo like an NBA floor general. It would probably serve him well to improve his midrange game to diversify his offensive repertoire.

Defense: A great ball-hawk, pressuring his man the entire length of the floor and being a general nuisance when his man has the ball. Great lateral quickness. His ability to jump into passing lanes allows him to create some turnovers, though he tends to avoid taking unnecessary risks. A smart defender considering his experience level, and much of his ability can be contributed to his time at North Carolina. Shows a willingness to go after long rebounds, but would just as soon get ready to receive an outlet pass. Size will always be a hindrance in this area, though, as opposing guards can easily see the floor and get shots off against him.
Read full article

Strengths
Raymond Felton possesses tremendous speed and quickness. With or without the ball, he is one of the fastest guards in the country, college or pro. His explosive quickness allows him to beat defenders off the dribble and dash past defenders in the open court. He can change speeds in an instant and is rarely caught off balance. On the break, he has the ability to rise above the rim and finish strong due to his great vertical. Felton makes up for any lack of size or strength with his superior athleticism. He has shown during his career at North Carolina that he is extremely tough and resilient and able to play through injuries, which were many. Felton never missed a game in college due to injuries.

Felton is a fantastic ball handler, probably the best in the draft. He can get anywhere on the court at any time. Coupled with his relentless attacking style this puts constant pressure on the defense. Felton has the ability to beat defenders off the dribble either to his left or right and does so often. Once in the paint he can finish at the rim with either hand. His speed and ball handling skills make him almost impossible to press against. He splits defenders with ease, using a low fast dribble to his advantage. He always dribbles with his head up looking for open teammates ready to dish at any moment.

Felton is a rare breed these days. He is a true pass first point guard looking to get his teammates involved before looking for his own offense. He has incredible court vision and sees things develop long before they are there. On the break he is deadly. He can make difficult passes look easy and is not scared to make those passes, even in traffic. After beating his man off the dribble he does a great job of drawing defenders then dumping the ball off to open teammates in the paint. Despite all his passing skills, Felton is not a showboat and does not make unnecessary, flashy passes. He gets the right person the ball, in rhythm, at the right time.

When Felton needs to score he can and he showed it throughout North Carolina's title run. His jump shot has improved drastically from last season to this season, going from 31% to 44% (70 out of 159) on 3 point attempts. He is now showing good form with his elbow tucked in, solid follow-through with his hand and good rise and lift going straight up. He has stopped the unnecessary drifting and fading that plagued him during his first two years at North Carolina. Felton is no longer a liability from behind the arc.

On defense, Felton is a tireless worker, showing great energy, desire and anticipation. He has incredibly quick hands which allow him to get to many errant passes or loose balls. He also has exceptionally quick feet and he knows how to get position, which makes him tough to beat off the dribble. His speed, quickness and athletic ability also allow him to guard opponents far from the basket. Felton is a very aggressive defender, often gambling for steals in the passing lanes, although much of this was due to Roy Williams' defensive philosophy. Despite his aggressiveness, Felton does a good job of avoiding fouls. He only fouled out of one game his junior year. Felton also played man to man almost exclusively at North Carolina, which should give him a head start over some guards.

Felton has certain traits that you just can't teach. He is a natural leader, he is very competitive and he is a clutch performer, rising to accept any challenge. He's been a winner at every stage in his basketball career. In high school he won back to back state titles. He scored 45 points in the championship game his senior year. Now you can add a college national championship to that resume.

Weaknesses
At 6'1, Felton is a bit small compared to today's new breed of point guards. He could potentially struggle in the half-court against some of the bigger and stronger point guards in the league. Because of his hard-nosed, relentless style of play he tends to get banged up often. In college, he was able to play through most of these injuries but that could change in the NBA, especially when larger and stronger opponents are factored in. One way that opponents have figured out to slow him down is to knock him down really hard (like in the first Wake Forest game this season), Felton will usually get a little passive if he is consistently being roughed up.

On one hand, the speed at which Felton plays at is one of his greatest strengths; it can also at times be his greatest weakness. He needs to cut down on the turnovers, which are almost always a result of playing too fast or trying to make passes that are too difficult. It sometimes seems that Felton can only play at one speed, which of course is lightning speed. He is going to have to learn to slow down and take what the defense dictates.

As mentioned earlier, Felton drastically improved his outside shooting but he still has much room to grow. He is going to have to show defenders that he can make at least enough outside shots to keep them from doubling off him. While Felton may never be a great 3 point shooter he at least needs to be able to knock down the open ones. Developing a great mid-range game will be more important for Felton than 3 point shooting. With his combination of quickness and ball handling every defender is going to be playing him to drive. If he can become a deadly shooter off the dribble from 15-20 feet he will be almost impossible to guard. Felton needs to also improve his free throw shooting. He shot 70% from the line this season, which for a point guard that has the ball at the end of the games isn't great.

Competition
The starting PG for the national champions. Nuff said? If not, check out the links section for more.

Outlook
Felton's talent is undeniable. He has all the tools to be a terrific point guard. His greatest attributes, such as quickness, speed, leadership, vision and instincts are things that can't be taught. You either have them or you don't. His biggest weaknesses, such as turnovers and shooting are things that are easily improved through hard work and coaching. It's these reasons why Felton, despite being a 3 year college player from a national championship team, still has a lot of room for improvement. His upside is still tremendous.

What team/coach that drafts Felton will have a bigger impact on his success than the other top point guards in the draft. Felton needs to play for a coach that is willing to let him push the ball and play at the speeds he thrives at. In the right system, Felton can be the best point guard in the draft; in the wrong system Felton just might be average.


Facts
2003-2004: First UNC player to ever obtain more than 400 points and more than 200 assists in their freshman season alone.
Read full article