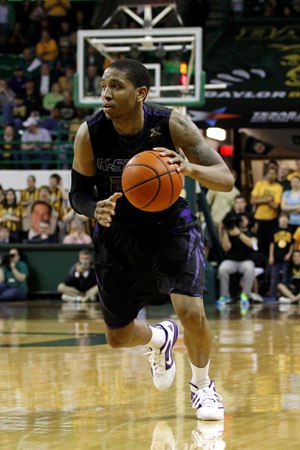 A top-100 recruit in the RSCI coming out of high school, Rodney McGruder emerged as Kansas State's leading scorer last season as a junior. Keying the Wildcats to a NCAA Tournament run, the talented shooting guard ended the year ranked 7th in the Big XII in scoring at 16.2 points per-game, earning All-Big XII 2nd Team honors in the process. Returning to Manhattan for his senior year, McGruder will look to build his draft resume in a new system under first-year Head Coach Bruce Weber.

A 6'5 shooting guard with an average wingspan and solid frame, McGruder is a good, but not great athlete for his position at the college level. He has good speed and can finish plays above the rim when he has a head of steam, but doesn't have the type of elite leaping ability and quickness that would put him on par with the average NBA wing.

While McGruder may not be a prototypical athlete by NBA standards, or have much flash to his game, he has great toughness, played hurt for stretches last season, competes every game, and can score in a variety of ways at the NCAA level. McGruder's role last season revolved around his ability to take what defenses gave him when spotting-up on the perimeter or running off of screens.

Seldom asked to create his own shot one-on-one or run the pick and roll, nearly 40% of McGruder's field goal attempts are catch and shoot jumpers according to Synergy Sports Technology. Knocking down 40% of his career three-pointers coming into last season, McGruder shot a respectable 38.5% from distance as a junior, getting fewer open looks than he did earlier in his career. Looking out of rhythm and missing badly at times, McGruder is at his best when he can set his feet with space in a spot-up situation, rise, and fire.

When he's forced to put the ball on the floor, the Washington, D.C. native is not a prolific pull-up shooter, but has deft touch on his floater and isn't shy about aggressively taking the ball to the rim. He takes some difficult push shots from time to time, but is not prone to forcing such shots into the teeth of the defense. If McGruder can become a bigger threat to create offense with the ball in his hands, or post a career year shooting the ball from deep, he should find himself ranked among the very best scorers in the Big XII.

Defensively, McGruder plays with good intensity, contributes on the glass, and holds his own at this level. Lacking great length and quickness, the rising senior will get in a stance and aggressively close out shooters, but isn't a major factor in the passing lanes and will get caught being a bit too aggressive helping his teammates at times. He does a nice job defending comparably athletic players one-on-one, but his ability to defend his position at the NBA level is questionable.

Rodney McGruder figures to once again carry the load offensively for Kansas State, and what development he's able to show as he shoulders that burden will factor heavily into where he stands this spring. A potential candidate for the Portsmouth Invitational Tournament, McGruder will have ample opportunity to show what, if anything, he's added to his game to solidify his standing among shooting guards in the senior class.
Read full article

Joey Whelan
@DraftExpress
A top 100 player from the class of 2009, McGruder is a dynamic shooting guard who never seems to slow down. He has a nice decent sized frame with a solid wingspan, and at around 200 pounds, has the muscle to handle contact when he gets in the lane.

McGruders game is explosive in every sense of the word. He has a great first step and is very tough to stop once he builds up a full head of steam. His vertical is good enough that he can elevate over a lot of taller players at the prep level and finish strong around the rim. McGruder is at his most dangerous when he gets out in transition with the basketball. His breakaway speed, agility and above average handles allowed him to weave through the oppositions entire defense on a few occasions.

In addition to his ability to get into the lane and finish around the basket, McGruder showed flashes of a nice mid-range game. A few times in the second half he was able to knock down 15-foot pull up jumpers while in transition. This made him even harder to guard, since if defenders overplayed for the shot, he had the quickness to burn them off the dribble.

McGruder, while still a very raw athlete, showed an overall pretty good feel for the game. He could certainly still use some polish, and his defensive intensity wavered at a few points. At this stage of development though, McGruder has a game that if it continues to develop, should lend itself nicely to playing in the backcourt at the college level.
Read full article