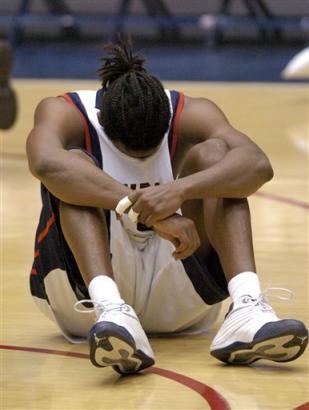 Jonathan Givony
@DraftExpress
Another player who has been up and down mock draft boards for years, it is finally time for Turiaf to make his jump to the league. While there are some negatives to Rony's game, you have to love the fire and passion he plays with. He gets to every loose ball and rebound, and seems to really relish knocking people around in the paint. His offensive game remains quite raw, but Turiaf is going to score quite a few points just off his dominance on the offensive glass. Rarely have we seen a player put on so much bulk over the course of four years, as Turiaf has gone from being a slender kid to a mini bulldozer. While some may be surprised to see Rony Turiaf brick so many post moves, one has to love his ability to dominate around the basket on the college level. If he focuses on this, he can secure his spot in the first round and perhaps move up into the teens. Rony Turiaf is going to absolutely have his way with whoever he faces in the second round, as neither Texas Tech or UCLA have someone who can fight with him in the paint.
Read full article

Strengths
Ronny Turiaf started his college career as a skinny unknown with a mean streak. In the four years since he has added an astonishing amount of bulk, but hasn't lost a bit of the fire that made him a household name almost the minute he stepped onto the floor for Gonzaga. While many people think of Turiaf as a fundamental back-to-the-basket scorer first, it's pretty obvious that his strength lies in his ability to disrupt things around the basket. Currently listed 6'10 and 250, it wouldn't surprise me if he weighs 10-15 pounds more than that. He looks like a completely different player than he did as a freshman, but hasn't lost any of that explosiveness that makes him so tough to contain. Turiaf is blessed with a fire for the game, and seems genuinely eager to knock people around down low. Given his impressive frame and strength, this allows Turiaf to dominate doing the little things. He is an incredible offensive rebounder, a first-rate post defender, and an enthusiastic shot blocker. He gets good position in the low blocks on offense, and when he wants to hold his ground on defense, he might as well be a 7-foot block of granite. He might not look like a guy that can get up and block a lot of shots, but he has great anticipation, and that unexpected burst in his legs. Where other players tire, Turiaf keeps coming at you. Eventually, he will start winning the battle around the basket. In this way, Rony Turiaf is very reminiscent of your classic enforcer PF, of which we seem to be seeing fewer and fewer these days. Turiaf has some work to do on his post fundamentals, but seems to understand what it takes to get his shot off down low, and has an adequate midrange jumper for this point in his career.

Weaknesses
While the book on Turiaf has always been his dominant scoring ability, Rony's offensive game might just be his biggest weakness. Turiaf gets good position at will and has a solid scoring average, but he doesn't have good touch on the ball, and many of his attempts miss very badly. While his strength allows him to convert the high percentage opportunities around the basket with ease (this is where most of his points come from), he is very bothered by contact on his post moves. Slight bumps clearly throw him off. As of late, Turiaf actually seems more comfortable shooting a set shot out away from the basket than he does operating with his back to it. Furthermore, despite being a good passer out of the post, he rarely gives it up once he gets the ball with his defender on his back. On a team like Gonzaga, you might say he has a tendency to force shots a bit. The other major weakness in Turiaf's game comes from that natural ferocity that makes him such a good prospect. It becomes a weakness when you start to see the overeager tendencies in his game. While Turiaf has the physical aspect of defense down quite well, he still routinely bites on pump fakes, leaving the basket exposed. This also leads to quick fouls, and Turiaf is almost always in foul trouble. Even after four years of college, he still hardly manages to average 30 minutes per game. While you can never fault a player for being aggressive, Turiaf will have to learn to reign in that fire just a little bit.

Competition
You might think that playing in the WCC would leave Turiaf's ability to perform at a tougher level in a bit of doubt, but Gonzaga plays a very tough non-conference schedule. Turiaf was hobbled by an ankle injury for much of it this season, but has proven that he can go toe to toe with most standout college bigs. Turiaf is also a very accomplished international player, starring for France in numerous junior tournaments.

Outlook
There are a lot of intriguing PF's slated to go in the middle of the first round in 2005, and Turiaf might just be the most impressive of the bunch physically. He has the size, strength, and athleticism. It's unlikely he ever becomes a top-tier scorer, but his intensity and ability to control the paint with his strength make him a future double-double machine in the NBA. There isn't as much upside here as in many of the first rounders, but the team that takes Turiaf in the first round isn't risking much, either. Ronny Turiaf is ready to succeed in the NBA.

Comments
Turiaf has been in the spotlight for quite some time, but there are some misconceptions about his game that must be cleared up.

- However, Turiaf does excel as an "enforcer" type PF, willing to beat people up and wear people down in the post. His rebounding, shotblocking, physical post defense, and motor that doesn't turn off is what makes him a successful draft prospect.

- It should be noted that Etan Thomas isn't exactly an accurate "worst case" for Turiaf. The two are very similar players, though I believe Turiaf has more upside.
Read full article