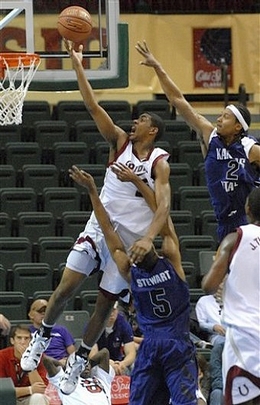 Riders Ryan Thompson had one of the more revealing performances at Portsmouth, leading the tournament in scoring while demonstrating versatility and an incredibly high basketball IQ.

At 66, Thompson has good size for the wing along with solid length and a strong frame. He is a less than impressive athlete, however, and, while he could maximize his physical potential by slimming down some, he will likely remain below average by NBA standards.

On the offensive end, Thompson played an incredibly intelligent brand of basketball and displayed a very diverse skill set. He was most effective as a shooter, hitting 57.5% from the field and 64.3% from beyond the arc. Though he could still get more elevation on his jump shot, he has corrected much of the flat-footed, arc-less shot he displayed as a senior in college, where he shot just 32.4% from beyond the arc.

He also showed some of his mid-range game, taking his man off the dribble, creating some space, and pulling up for a jump shot. Despite his average first step, Thompson was able to use his size and strength advantage to get his shot off. Though he was not as successful or efficient around the rim because of his lack of ideal quickness and lift, he was able to score due to his solid body control and excellent touch.

Thompson was unable to score on athletic wing defenders such as Marquis Blakely, however, suggesting that he will have a hard time adjusting to NBA caliber defenders.

Thompson did, however, thrive as a team player. He displayed good court vision and, aside from the occasional lapse, excellent decision making. He was unafraid to make the extra pass in order to facilitate ball movement or defer to a teammate if his shot wasnt falling. He also made quite a few nice passes off of the dribble. In addition, he moved extremely well without the ball, talking to teammates, and spreading the court.

He did a solid job defensively in the setting, even though his lateral quickness is below average. While he likely cannot defend the most athletic wing players we find in the NBA, he is a smart defender and was able to use his strength, size, and quick hands to his advantage.

Ultimately, Ryan Thompson had an outstanding performance coming off of a sub par senior season and proved himself to be one of the best players in attendance. He likely convinced scouts that, while he may not an NBA player at this point, he has a long and prosperous career ahead of him at a high level professionally.
Read full article

Joey Whelan
@DraftExpress
Being the little brother of one of the best rookies in the NBA (Jason Thompson) at the moment certainly has its perks, as lil bro Ryan is likely to get even more attention this upcoming season. From what we can tell based off his film from last season, hes not likely to let down the scouts that decide to continue to make the trek to South Jersey to watch him play.

Standing 6-6, with a nice frame and long arms, Thompson definitely has the look of an NBA shooting guard. He is a pretty average athlete by NBA standards, but brings all kinds of versatility to the table to make up for that.

Thompson is a true do-it-all type swingman, posting a very well rounded 15 points, 6.2 rebounds, 3.4 assists, 1.7 steals and .6 blocks in 34 minutes per game last season, as just a sophomore. He shot a very impressive 54% from the field and 44% from beyond the arc as well, making him a highly efficient player on top of that. He made a huge jump from his freshman to sophomore seasons, and it will be very interesting to see if he can make a similar leap in ability in his junior year as well, particularly now that his brother (who drew a huge amount of defensive attention) is out of the picture now.

Offensively, Thompson tends to let things come to him, and is not a terribly prolific scorer at this point. He has a very high basketball IQ. Though, and really knows how to pick his spots and find open seams in defenses. Whether its spotting up for open looks from the perimeter, driving the ball to the basket going left or right, getting to the free throw line or even posting up at times, Thompson does a little bit of everything.

Just 25% of his Thompsons field goal attempts came from beyond the arc last season, despite (and likely because of) the terrific percentage (44%) he shot. He sports somewhat of an ugly, flat-footed stroke with a fairly slow release and a bit of side-spin action. He is extremely reliable with his feet set, but tends to lose accuracy when rushed, which is something to keep an eye on now that he no longer has his extremely unselfish brother drawing double teams in the post and creating open looks. If he manages to shoot 40+% from 3-point range this season once again, he would really open up some eyes.

Thompson can put the ball on the floor as well and create his own shot with either hand, even if his ball-handling skills look somewhat improvable and he at times lacks the explosiveness to get by defenders off the dribble and finish. He is very tough, smart and aggressive looking to make things happen, though, which at the Metro Atlantic conference level is often more than enough to get the job done. He does a fair share of ball-handling in Riders offense, and displays excellent court vision, as evidenced by his 3.4 assists per game. He is a little bit turnover prone, thoughsomething he can likely improve on by working on his ball-handling skills.

Thompson is a very lively and active defender as well, exerting a good amount of effort on this end of the floor. His terrific size and length at his position are a huge plus, and help him out considerably in coming up with a nice amount of steals, blocks and rebounds. One of the best attributes that Thompson displays is his willingness to mix things up and do the little things for his team. He crashes the glass ferociously, and plays with a controlled style of reckless abandon that is very enjoyable to watch.

Rider plays a good bit of zone, making it a bit difficult to evaluate Thompsons precise defensive potential, but it appears that he sports somewhat average lateral quickness and tends to get beat off the dribble a fair sharethings we need to look a little closer at this season.

Despite the graduation of his brother Jason, Rider will probably still be a tough out in the MAAC. With two more seasons left to improve and become an even more polished all-around player, its certainly not of the question that Ryan joins him in the NBA after hes done there.
Read full article