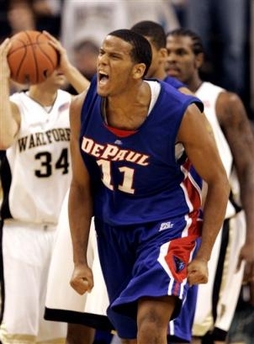 Richard Walker
@DraftExpress
Coming out of DePaul in 2007, Sammy Mejia was a borderline prospect possessing a lot of the tools GMs look for, but not showing the consistency needed to find his way into the league immediately. Nonetheless, the Detroit Pistons selected him in the second round, 57th overall, and brought him into camp, but decided to waive him at the beginning of the season due to a roster spot crunch. Due to the new NBADL Allocation Rule, he was assigned to the Pistons affiliate, the Fort Wayne Mad Ants. After being injured in Fort Waynes training camp, they injury released him until he got healthy enough to resign with the team. Since then, he has lead their team in scoring at just under 22 points per game and rebounding with a little over 8 per game.

Sammy struggled in the first quarter, going only 3 of 8. He drove both right and left to the basket, but was either cut off and forced to toss up a bad shot, or got caught in the air and unable to finish. He hit a pull-up jumper from just inside the arc at the end of the first which gave him momentum heading into the second, where he stole the ball off of the block and then trailed in transition for a dunk, and then pulled up just inside the arc in semi-transition for a straightaway long distance 2. He had trouble finishing at the rim in the first half missing an easy floater going right to left and then tossing another floater up wildly in the lane.

The second half was much of the same, going only 3 of 8, with Sammy trying to break the zone on a couple of plays and getting stuck dribbling too much outside of the arc on another. He did a good job defensively in the first half against Los Angeles D-Fenders forward Sean Banks holding him to 1 of 9 shooting, but in the second half Banks began to heat up and drove to the basket at will past Mejia. He rotated well defensively, but when left on an island he had trouble dealing with Banks pump fakes and first step.

Mejia has good footwork and a decent midrange game. Hes an on-court leader making sure players have their defensive assignments during freethrows and his hustle and good positioning allows him to rebound exceptionally well for his height, especially on the offensive end, where hes third in the league at 3.7 per game. Despite his talent, D-Fenders forwards Sean Banks and Devin Green managed to keep their hand in his face and hedge him off of his drives using their length and athleticism to disrupt his game. Mejia is an extremely skilled and versatile player, but lacking elite athleticism and a quick first step is a serious hindrance when it comes to taking his game to the next level.
Read full article

Joseph Treutlein
@DraftExpress
Mejia again had a solid showing today, though he still has a few weaknesses that limit his potential at the NBA level. Since finishing his season at Depaul, the talented guard has spent some time in the weight room and successfully added bulk to his frame. The added strength has helped his slashing game in Orlando this week, and he made a couple of solid finishes at the basket today.

Mejias shooting mechanics looked slightly improved over the course of his senior season from behind the three point line, though his free throw shooting dropped to a dismal 60%. In Orlando, he hasnt taken many jumpers, but he knocked down a couple of open 20 footers today. His free throw shooting still needs to be addressed as well. Mejia certainly has better vision than most guards as he displayed today on a couple of drop passes near the basket, but ball handling certainly isnt a strength of his right now.

Sammy Mejia has the talent to someday make an NBA roster, but there are concerns as to how he will fit in as a role player. Hes the type of player that needs the ball in his hands in order to be effective, and players like Mejia usually arent allowed to dominate the ball at the NBA level. It seems doubtful that he will be drafted, but it will be interesting to see how he performs during summer league this year.
Read full article

Jonathan Watters
@DraftExpress
Sammy Mejia had yet another solid showing here on Day Two, which is a pleasant surprise after his non-descript showing in Portsmouth about a month and a half ago. Today was probably Mejias best performance, as he did a little bit of everything well, not making many mistakes in the process. Mejia made some nice assists on little drive and dishes, drawing in defenders even though he wasnt able to blaze past his man with his first step. He doesnt usually get to the rim on isolation plays, needing a bit of separation first to take the ball all the way to the basket, instead settling for pass-offs or pull-up jumpers. He didnt convert on most of his outside shots today, missing twice from 18 feet, once from three-point range, and once on a pull-up from 12 feet, though he did make one of his shots from 18 feet out. He got most of his scores by cutting to the basket, finishing at the rim with lay-ups and jams, playing off his point guards creation abilities. Mejia also had a nice five-footed, uncontested floater off a broken play on one possession.

Mejia is playing himself back into NBA discussions, but he still just has an outside chance to get drafted, though another solid or better performance tomorrow would help his stock. Hell get his chances in summer league, but he might not catch on immediately, as while he does a lot of things decently well, he isnt really great at one particular thing, and most teams want role players to really excel and consistently contribute in at least one area.
Read full article

Jonathan Watters
@DraftExpress
Mejia certainly had his moments at DePaul, but was never able to develop the all around game or consistency to make a significant rise in terms of professional stock. Mejia would have his moments this afternoon as well, but didnt do anything that will get his named called on draft night.

Mejia has added a bit of bulk to his painfully thin frame since the end of the season, and was able to put it to good use with a pair of transition slashes to the bucket early on. But on the whole, it was a very quiet game for a player on the outside looking in when it comes to draftability. Mejia entered college billed as a combo guard, but eventually became a full-time wing and didnt get the chance to show off much in terms of ball handling here. He certainly has good court vision for a wing, as evidence by a couple of very nice passes in this game. But these were offset by a couple of sloppy ballhandling mistakes, and it would be nice to see Mejia take advantage of his formidable length and athleticism a bit more than he did in this one.

It isnt hard to see Mejia putting in a big-time effort here in Orlando, but at this point he probably needs to if he is going to convince a team to spend a draft pick on him.
Read full article

Jonathan Givony
@DraftExpress
Sammy Mejia hasnt improved much if at all over the past few years, as evidenced by the dramatic swings him and Depaul suffered all season long. In one game he scored 40 points, while 10 other times he didnt manage to crack double figures.
Read full article

Landry Fields
@DraftExpress
Saving us from a long drought of nationally televised college basketball caused by Finals exams week marking the end of the Fall semester was a highly entertaining matchup at the Lawrence Joel Coliseum, Winston-Salem, N.C. between Wake Forest and DePaul last Tuesday. The star of that game and the catalyst behind the Blue Demons surprising upset over the Demon Deacons was 6-6 Dominican Republic native Sammy Mejia.

Mejia is an intriguing prospect to watch because of his outstanding combination of size, length, ball-handling skills and point guard instincts, using all of them to make his presence felt and will his team to this impressive road win. He created his shot time after time in this game and used his trademark footwork, body control and mid-range jump shooting ability to put the game away down the stretch when Wake Forest made a late run.

While his talent with the ball in his hands is undeniable, his decision making (negative assist to turnover ratio), perimeter shooting (23% on the year beyond the arc) and body language all leave serious questions about his pro potential at times, as hes gained a reputation over the years for being a soft player that is unable to string together more than a couple of good games. Indeed in DePauls very next outing at Old Dominion just a few days later, Mejia struggled badly shooting 1-9 from the field with 5 turnovers in a 44 point drubbing by the Monarchs. When Mejia is on, he is a true triple double threat that can also contribute defensively if need be. More often that not he floats in and out of games, dribbling the ball excessively one minute, forcing up a terrible shot the next, and then looking like hes in a completely different world for the next 15. Watching him play, its hard to comprehend at times, as he has the type of versatile talent that few players in the NCAA possess at his size. Turning 22 this February, Mejia will have to get his stuff together and string together some good games in the Big East. Not only for his own sake, but also if DePaul is going to have any shot at making even the NIT.
Read full article