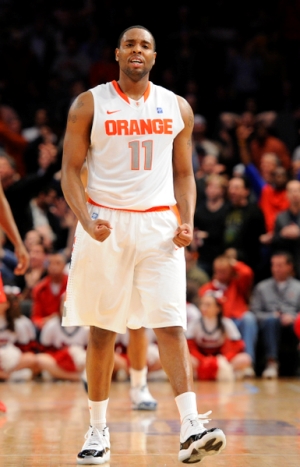 One of the most productive returning players on a deep and talented Syracuse roster, Scoop Jardine had a busy summer that included time at the Nike Skill Academies and with Team USA and World University games and promised good things during his senior campaign. Like so many Big East guards that have come before him, Jardine has steadily improved from the day he stepped on campus. Though he missed a season due to a stress fracture in his left leg, struggled with his weight for stretches, and had his fair share of struggles in recent seasons, the rising senior has made some positive strides since his high school days that will keep scouts interested as he becomes eligible for the draft.

Standing 6'2 with a dramatically trimmed down frame, Jardine has molded himself into a solid physical specimen. He may not be a dynamic athlete in the open floor or play above the rim on a regular basis, but the Philadelphia native does a nice job off-setting his lack of great explosiveness by being deceptive with his ability to change directions in the paint, using his relative strength advantage against weaker guards, and playing with consistent intensity.

Jardine may not be a high-potential NBA player from a physical perspective, but the 23-year old guard is a polarizing figure for the Orange. He's capable of catalyzing Jim Boeheim's club with his passing and scoring ability or being the key contributor to their struggles when his shot isn't falling and he's playing out of control. Seeing time both on and off the ball, Jardine is not a point guard in the truest sense, though he has that type of impact on his club and will have to play that position at the next level.

When Jardine is at his best, he's a competent scorer in almost every facet of the game. He is a self-made shooter who can score the ball with range off the catch and off the dribble, can convert craftily around the basket despite his athletic limitations, and make life extremely easy for his teammates with his passing. Jardine could stand to improve his consistency from beyond the arc, especially in spot-up situations, by working on his footwork and being a bit more discerning with his shot selection, but he can be a tough cover when his shot is falling because of his feel for using his defenders momentum against him. His lack of elite quickness limits his ability to break down defenses one-on-one unless his defender is forced to close him out, but his court vision is, at times, truly excellent as evidenced by the fact that he ranked among the top players in all of college basketball in assists per-40 minutes pace adjusted.

On the other hand, Jardine struggles at times as well. His consistency from beyond the arc has developed considerably since his freshman season, but his efficiency in catch and shoot situations could use improvement, as he tends to lose his rhythm at times because of the fact that he likes to shoot the ball on the way down. His shot selection leaves a lot to be desired as well, as he forces quite a few contested shots from the perimeter and converts just 46% of his 2 point attempts by being overly-aggressive instead of opportunistic. When Jardine went cold last season, his struggles were often compounded by the fact that every game he makes a few questionable decisions, whether he is driving into a brick wall in the lane or making a poor read when pushing the ball in transition. Considering his assist-to-turnover ratio exceeded 2, it is hard to condemn Jardine's decision-making, but he is capable of better.

Defensively, Jardine is fairly adept at reading the passing lanes in Syracuse's 2-3 zone, but lacks ideal lateral quickness from a NBA perspective. He shows quick hands and is fairly crafty in compensating for his lack of foot speed, but will need to show that he can defend the point guard position competently in workout settings if he wants to get the benefit of the doubt considering the system he's coming out of.

Though Jardine may not be the most glamorous NBA prospect, he is one of the best players on one of the country's best teams. If he can put everything together and have a lights-out season shooting the ball, he could improve his draft stock and put his team in position to reach the Final Four. If he doesn't take a significant stride in terms of his development, he's an ideal candidate for the Portsmouth Invitational Tournament, where he would likely get a chance to showcase his point guard skills and man-to-man defense in front of a broader audience.
Read full article