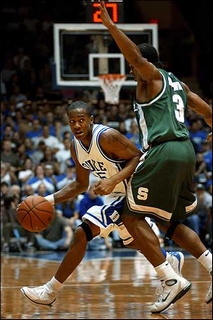 Eric Weiss
@DraftExpress
Sean Dockery continued to show just how little we all got to see of his overall game during his time at Duke. Dockerys ball-handling skills are significantly greater than hes given credit for and his court vision and passing creativity are on par with any of the guards in this camp, if not better. Dockery showed off some very clever moves when penetrating toward the basket, using good body control and touch to finish a number of NBA caliber shots in the lane. Defensively, Dockery is a bit physical but is extremely effective when he doesnt gamble for the steal. Hes got quick hands and quick feet which enable him to disrupt the opposing point guards rhythm and concentration.

Dockerys biggest weakness is his ability to consistently hit shots off the dribble or with his feet set. His shooting mechanics are solid from the waist up, but he has a tendency to drift on his jump. There are flashes of his ability to create shots for himself, but he has practiced it so little over the last 4 years it will take quite some time to master.

Overall, Dockerys intelligence and overall ability are worthy of a 2nd round pick for any team looking for help at the point guard position. Even if he goes undrafted, Dockery has shown enough to warrant a Summer League invite where he can continue to develop the latent skills that he has as a primary ball handler.
Read full article

Eric Weiss
@DraftExpress
Dockery had a very solid game running his team today. Dockery started off steady and ramped up his level of play as the game went on. Dockery displayed some very crafty dribbling skills and used them to good effect as he was able to penetrate the lane and make things happen for himself and his teammates. Dockery showed a couple of nice floaters, using good body control and mid-air creativity to free himself up. The play of the game, a sick Taj Gray dunk, was set up beautifully by the attention Dockery was able to draw that helped free up Gray for the delivery and jam. Defensively, Dockery relied less on hand checking and more on footwork and quick hands to do the job which is key because he had been fouling too often before.
Read full article

Eric Weiss
@DraftExpress
One of the more pleasant surprises at the tournament considering that he really shouldn't have been invited with his season averages (7 points, 2.6 assists), Dockery is another example in a long line of NCAA players who show how much impact a change of scenery can have. Dockery looked extremely poised and confident in his ability to run a team, breaking down defenses at will with his terrific ball-handling skills, first step, and ability to change gears, finding the open man with ease time after time. Dockery finished 2nd in the tournament to Barea in assists at 8.3 per game in just 28 minutes, and did it with an impressive 2.78 a/to ratio. His defense was exceptional as were the leadership skills he showed. Dockery didn't knock down an incredible amount of perimeter shots (just 4 of 6 attempts), but the ones he did hit looked very good and were for the most part off the dribble rather than from static situations. This is likely something that scouts will look closely at in private workouts as it's been the knock on him for quite some time. Based on the fact that he was played at the two-guard position for the entire year in favor of a freshman that looked very shaky at times, you would think that Dockery is more of a combo guard than a true point. That is hardly the case, though, especially when you consider how good his court vision and passing skills are while on the move, a very important skill to have in the NBA. All in all Dockery helped himself tremendously at Portsmouth and should have established plenty of momentum heading into the draft process. He surely locked himself up an invite to the Orlando pre-draft camp and will be the type of player that every NBA team wants to take a look at in private workouts, considering how worthless he made the four years of game footage from Duke look in just four days.
Read full article