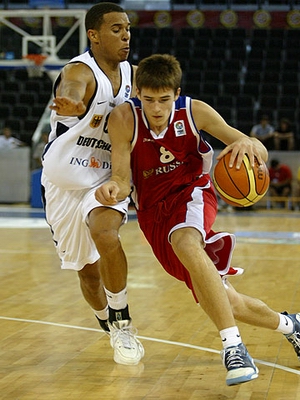 DraftExpress
@DraftExpress
What more do we need to say about Semen Shashkov? Surely not that hes worthy of an honorable mention, barely deserving the very few minutes (9.5) his coach gave him. Right now its tough not to call him a waste of great talent and athleticism. His statistics speak for themselves: 2.1 pts (5/12 2FGs, 1/8 3FGs, 4/7 FTs), 1.3 rebs, 0.5 assists, 0.9 turnovers, 0.5 steals and 0.5 blockshots in 9.5 minutes per game (total 8 games played).
Read full article

Jonathan Givony
@DraftExpress
Shashkov had a fairly average showing at this Eurocamp, again looking too passive and raw offensively to really make his presence felt on a consistent basis, and again waiting until the very last day to show the small glimpses of potential that keeps people interested in his progress. A 6-9 perimeter player with a great frame and nice athleticism, Shashkov is impressive from a physical standpoint. He can attack the basket with big, long strides, but lacks the ball-handling skills or aggressiveness to really take advantage of this part of his game, looking mostly to play off the ball, shooting 3-pointers or finishing at the rim, with very little coming in between. His feel for the game remains average, and it doesnt seem like hes made all that much progress from last year to this. Shashkov has the tools to be a very good defender, even if his effort and motor seems inconsistent at times. Still a young player at just 19 years old, Shashkov would probably be well served going to a team where he can see consistent playing time this upcoming season.
Read full article

Jonathan Givony
@DraftExpress
The final day of the camp finally brought a strong performance from Shashkov. Ironically, hes showing some serious consistency in his perennial inconsistency. He usually goes almost completely unnoticed, but in every single tournament or event he takes part, he just erupts for one really strong game. This time he saved the best for the closing day, starting to make some noise late in the first game he played, going for 9 points (4/9 FG, 1/3 3P), and caught fire in the first half of the second against the French U-20 team, ending up with 14 points (5/7 FG, 4/6 3P), 6 rebounds and 5 steals. In his good showings, he looks like an excellent gunner from long-range and standstill positions, enjoying nice mechanics in the release. He also delivered a couple of remarkable slalom drives, where his footwork and decent handles stood out. However, he looks a bit of a soft player, always avoiding contact and not being particularly aggressive in his game, which would nicely explain some of his inconsistency. Notably sized for a small forward, pretty athletic, with a nice frame that he still needs to fill out, even if he doesnt look like the smartest player around, theres no wonder he has some very serious tools to play this game, but its not clear if he enjoys the mentality to go along with it.
Read full article

U-18 European Championship: The Wings

Luis Fernández
@DraftExpress
Just like he did back in May in the Euroleague Junior Tournament, Shashkov again delivered another extremely inconsistent performance. Enjoying only a couple of good games, he struggled for the most part to get any kind of game rhythm. And while he shows some of the best potential in his age group, his apparent lack of competitiveness and any kind of steadiness results into a very big question mark.

His conditions to play the game are awesome. Hes a big guy at 6-8 with very solid athleticism and an excellent frame, precisely in the mold of so many Russian small forwards over the last years. Hes a guy with a pretty complete package, although all his tools seem fairly raw. He can shoot the ball with range and in off-the-dribble fashion, but hes very streaky. He can attack his match-ups putting the ball on the floor and going both ways, but he still needs to be more aggressive in his attempts. He can finish around the rim with both hands. He displays the abilities of a perimeter player, but played a lot of power forward in the tournament, which didnt help him. Shashkov is not much of a post player, where he doesnt show reliable footwork, unless he goes for the turnaround jumper. Also, hes not a great off-the-ball player, sometimes staying too static. Hes quick enough on defense to match-up against perimeter guys, while hes also a bit too soft to keep up with big men. He can come up with spectacular stuff relying on his length and athleticism, such as dunks or blocks, but those are just isolated reflections of his potential.

Shashkov needs time, work and probably an improved mentality. He has the tools, he seems to understand the game, and just needs to put everything together. Few guys in this tournament enjoy his potential, but its very questionable whether he will be able to fulfill it.
Read full article

Jonathan Givony
@DraftExpress
It seems that Russia has specialized lately in producing big and athletic small forwards, and Shashkov is the last example. Easily in the 6-8 range, he enjoys superb physical attributes with an excellent wingspan and frame (although hes still on the skinny side), while he displays promising athleticism.

Still, his performance was just as inconsistent as some of his characteristics are intriguing. He was flat-out awful in the first two games, only to emerge in the third with a solid stat line and some spectacular plays. Shashkov has little experience in big tournaments (hes yet to play with the Russian National Teams and couldnt make it to the LHospitalet Junior Tournament due a small injury) and the pressure to perform well in this setting might have been too much for him to handle.

Shashkov is still learning the ropes of the game, but he shows solid fundamentals to work with. He was active enough to display promising mechanics with his jumper, which looked extremely inconsistent from behind the arc and a bit more effective from the mid-range area. He gets rather nice lift, and his release seems pretty fluid. Semen also appeared capable of dribbling with both hands and nicely passing the ball off the dribble, although he came away with mixed results whenever he decided to attack his match-ups, partially because he could really use an extra-degree of quickness while driving the ball.

He can also take advantage of his size to post-up his opponents and finish with a turnaround shot. Obviously its easy for a guy with his length and athleticism to finish around the basket and play above the rim. Actually, in the last game against Olympiacos, Shashkov easily finished a couple of alley-oops in spectacular fashion well above the rim. He enjoys all the tools to emerge as a very good defender, and already is very productive rebounding at these youth stages, and even comes away with a few blocks. Anyway, he will need to become more aggressive, competitive and tough playing the game at both ends of the court. But hes easily one of the most intriguing players of his birth year, which is unfortunately not saying that much.
Read full article

Almantas Kiveris
@DraftExpress
Tied with Vasiliauskas as the best scorer at the tournament, Semen Shashkov could be definitely nominated as the best shooter of the Sabonis Cup. By the way, him and fellow teammate Denis Polokhin (more below) were not newcomers in Kaunas. Both players were part of CSKA Moscows winning team at the 2005 Sabonis Cup, although they didnt enjoy significant playing time among their 1988 born buddies the year before.

Shashkov possesses good length as a wing and probably left the most promising impression of all the guys seen here. Semens biggest asset is his shooting touch, which he demonstrated on any possible occasion. He has a wide array of ways in which he can finish around the perimeter. A set shot is a piece of cake for him and he is also able to create a shot for himself. Shashkov has quite a quick release and no fear of shooting just seconds after coming off a screen. He used midrange jumpers after a short dribble or two, even with defenders right in his face. A few times it resulted in airballs, but on others the 16 year old kid looked quite solid by netting some fadeaway jumpers.

It is hard to call Shashkov one-dimensional as he is much more than a simple spot-up shooter. However, the lack of penetrations was a glaring drawback in his play. During fast-breaks he showed that he can finish in traffic using some of his athletic abilities, but in the half-court game his very few tries at slashing looked rather weak. One guess could be that having a very strict coach in Andrey Maltsev, Semen decided to stick to what he knows he can do the best.

On defense, Shashkov was always concentrated, he took his fair share of rebounds, but with some overly-aggressive moves found himself usually collecting fouls quick, while on the other hand he managed not to pick up the last foul for a long time. Overall, Shashkov switched into dominating mode a few times during this tournament, making consecutive shots and carrying CSKA on his shoulders. If he improves his slashing, adds some toughness and becomes a bit more versatile, he could become a really interesting prospect in the long term.
Read full article