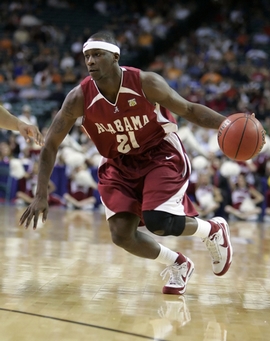 After flashing potential in a very limited role as a freshman, largely due to his freakish athleticism, Senario Hillman saw his minutes double as a sophomore, with him also improving in quite a few areas. However, while hes made strides in some areas, his increased role has also magnified some of his flaws, and there is much work to do before he becomes a legitimate NBA prospect.

On the offensive end, Hillman is still very much a shooting guard, playing the majority of the time off the ball, clearly being a shoot-first player, not doing much in terms of creating for others, and being very turnover prone with the ball. Hillman still does most of his damage with his mid-range jump shot, being able to get excellent separation off the dribble with his athleticism and rangy step-back move. However his shot is still very inconsistent, and the large percentage of shots he takes off the dribble with a hand in his face certainly does not help his efficiency.

While Hillman still has a long ways to go with his outside shooting, he is considerably improved from three-point range this season, doubling his shooting percentage and hitting five times as many shots from behind the arc, albeit that still only makes him a 29% shooter on 29 makes. Hillmans mechanics have a plethora of inconsistencies and potential issues, namely his tendency to fade away on almost all of his shots, rarely keeping his feet underneath him. In spite of these concerns, he does appear to have some good natural shooting ability, capable of hitting a lot of tough shots and showing good range, but hell never become a consistent and efficient thread if he doesnt clean up his mechanics and focus on getting more high-quality attempts (feet set, body squared, on balance).

In terms of attacking the basket, Hillmans separation abilities from his mid-range game do not carry over, with him looking a bit sloppy and out of control on many of his forays to the hoop. His handle does appear to be improving, but he still struggles very much when going to his right hand, and the array of floaters and pull-up jumpers he relies on in the lane are largely inconsistent. With that said, there is much to be impressed with in this area of his game, as Hillman takes long and quick strides with the ball while being able to effortlessly elevate around the basket, making this an area of his game where he still has considerable potential.

Defensively, Hillman still shows the same ability he showed as a freshman, capable of locking players down on the perimeter with an aggressive stance in combination with his excellent length and lateral quickness. However, some bad habits seem to be forming, as Hillman is prone to easing up, not getting into a full stance, and not always moving his feet, leading to some unnecessary beats. On the positive side, Hillman is a disruptive force in the passing lanes, making many plays leading to fast breaks by picking off passes.

Looking forward, Hillman clearly has work to do in virtually every facet of his game, which he should have plenty of opportunities to do with leading scorers Alonzo Gee and Ronald Steele now graduated, putting a much larger offensive burden on Hillman. With his athletic tools and defensive abilities, Hillman should get some looks down the line if he can become a more efficient player, however its going to be very much an uphill road if he isnt able to develop his playmaking ability, as he is undersized and lacking in any plus NBA offensive skills at the moment.
Read full article

Joey Whelan
@DraftExpress
Averaging 4 points in 14 minutes definitely means you obviously arent ready to be considered a NBA prospect, but considering the physical tools and upside that Hillman displays, this rising sophomore might not be the worst player to glance at, at the very end of this list.

To say that Hillman is athletic is a bit of an understatement, as the good folks on YouTube can tell you. Hillman is a highlight reel waiting to happen when he enters the lane, possessing incredible explosiveness and being extremely quick off his feet on top of that. How many 6-1 guards in college basketball have a set play in their teams half-court offense to throw them an alley-oop lob off a backdoor cut? Not many. Besides being an amazing leaper, Hillman is also extremely fast in the open floorjust a superb all-around athlete in general.

Offensively, most of Hillmans points come either in transition or spot-up jumpers, typically from mid-range. He has decent form on his left-handed jumper, and is able to create separation from his defender quite nicely, elevating off the floor and being capable of making shots at a decent rate from about 16-18 feet. Anything past that is probably not a good shot, though, as evidenced by the 6-41 (15%) Hillman shot from beyond the college arc last season, not to mention the 50% he shot from the free throw line. Hillman is probably a slightly better shooter than those horrendous numbers indicate, but not by much at this point. He has a substantial amount of work to do on his touch and range, as well as his shot-selection, which looks quite poor at times.

Despite being an uber-athlete, Hillman is not all that effective at getting to the basket, mostly due to his poor ball-handling skills. He cannot really drive using his off-hand (right) and is not all that good with his left either at this point, having only gone to the free throw line 34 times in 32 games last year. His decision making is not good and he shows very little resembling a point guards mentality at this stage of his development, which is not very good considering that hes just 6-1. Clearly he has a ton of work to do in this area.

Leaving some room for optimism is the fact that Hillman is an outstanding defender-- tough, pesky, and capable of absolutely smothering opponents with his length. His recovery speed and lateral quickness are exceptional, even if his body still needs to fill out to reach his maximum potential.

Hillman has all the makings of a three or four year college player at this point, unless he makes a Russell Westbrook-type jump in ability this upcoming season, which looks unlikely. He would be wise to be patient and fully round out his skill-set and also gain as much experience as he can before he begins to think about the NBA.
Read full article