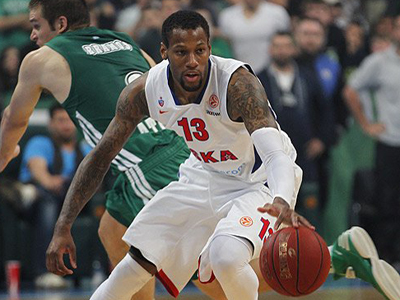 Matt Williams
@DraftExpress
Weems looked great today, using his athleticism to clean up after his teammates to the tune of two tip dunks and a nice putback. Hes a guy that can make an impact in this setting with his effort level, but lacks polish. Weems knocked down a couple of jumpers today off the dribble, but is still a work in progress from the perimeter. His range leaves a lot to be desired, and his consistency just isnt there yet. Fortunately, he has good touch, meaning some time in D-League or in practice could go a long way towards improving his offensive game. Weems may have had a nice offensive showing today, but his future on the NBA level is as a defender. He didnt produce much today, but looked good keeping his man out of the lane. While hes got great length and quickness, Weems still needs to learn how to play angles and be a better team defender.
Read full article

Joseph Treutlein
@DraftExpress
Sonny Weems closed out his college career on the highest note possible, putting together an excellent NCAA tournament leading 9th seeded Arkansas to the second round, where they were blown out by North Carolina. It probably wont be the 8-20, 22 point game he finished up with against UNC, but rather his game-changing performance in the first round against 8th seeded Indiana (31 points, 12-14 FG) that raised quite a few eyebrows from the many scouts in attendance. In hindsight, this weekend will probably end up looked at as being just what the doctor ordered in terms of kick-starting the pre-draft process into high gear for him.

In terms of physical attributes, Weems grades out very well at the shooting guard position, showing excellent size at 6-6, a solid frame, a good wingspan, and very nice athletic ability. He is very agile, fluid and quick off his feet, and even explosive in some instances, fitting the bill and then some for an NBA wing player.

Most of Weems offense comes off his jump-shot, where he is at his best coming off screens and elevating from mid-range distances. He sets his feet quickly, and has a high release point on his jumper, adding in a slight fade-away that makes it pretty difficult to guard. He can put the ball on the floor once or twice and pull-up off the dribble semi-well, creating very nice separation from his defender in the process, a testament to his athletic ability. His shooting mechanics are not consistent and he has a few fundamental flaws that hinder him from being much more effective from long range, but his good touch and solid overall scoring instincts allow him to get by with what he has at the current level of competition he plays at.

Weems jumper loses accuracy when hes unable to fully set his feet before he releases it. He has plenty of wasted motion, starting off with the fact that he brings the ball down before bringing it back up, and then cocks it behind his head for good measure, which doesnt allow him to get it off as quickly as he should. He seems to kick his feet out unnecessarily after elevating off the ground, fading away for no particular reason, which hurts his percentages as well. In the tape we saw, he looked infinitely better with his jump-shot when he made a conscious effort not to fade away and came down on two feet, something he should certainly work on to maximize his potential as a shooter.

As a slasher, Weems is strong and athletic enough to get to the rim off one or two dribbles and will generally finish well once he gets there, but hes not crafty enough to consistently create his own shot even at the college level. His ball-handling skills are poor, as hes unable to change directions in traffic or execute any real advanced moves against opposition. He doesnt like finishing with his left hand, gets to the free throw line only about twice a game, and also lacks polish on his mid-range jumper.

Defensively, Weems is extremely poor, clearly lacking awareness and fundamentals, not getting in any type of real stance, getting lost within his teams scheme on a regular basis, and often resorting to just gambling for steals and chasing after the ball instead of rotating and playing sound defense. He has all the tools to be extremely effective in this area, so its a bit surprising why he cant translate them into success on this end of the floor. His junior college roots likely have a lot to do with it.

Weems is a team player, though, not being selfish in the least bit, and looking more than willing to give up the ball within his teams offense. He executes their sets crisply and seems to have pretty good court vision, particularly in terms of making post-entry passes.

All in all, Weems still seems to have nice upside despite being finished with his college career, and could emerge as a viable NBA player down the road if hes willing to work on his very obvious, but very correctable flaws. Becoming a consistent shooter and a reliable perimeter defender should be his first priorities, but hes a guy to keep an eye out for, even if he doesnt make it in the first go-around. He has a chance to make a strong impression in a few weeks at the Portsmouth Invitational Tournament, where he should be one of the more interesting player for NBA teams to take a look at. We should keep in mind that hes still only 21 years old.
Read full article