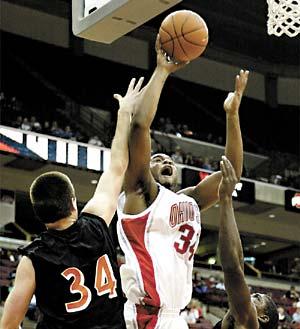 Jonathan Watters
@DraftExpress
]Terence Dials had the unenviable task of guarding Roy Hibbert without much help, and while Hibbert certainly took advantage of Dials at times, the senior fought admirably in the paint. Dials was able to contest Hibbert's shots on many occasions, and battled hard to keep him from getting deep position in the paint. On the offensive end, Dials was able to score over the 7-footer at times, using just about every trick in the book to get his shots off. If there was any problem, it was that the Ohio State guards didn't get the ball to him often enough.

While Dials, the Big Ten Player of the Year, is certainly a formidable offensive weapon at the college level, there is much doubt as to how his game will translate on the next level. His size and strength advantage just won't be there in the NBA, and he will have to prove himself at the Draft Camps this spring.
Read full article