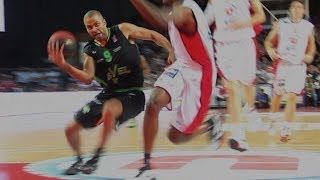 Matt Williams
@DraftExpress
Overview: A unique point guard with great speed and an aptitude for shooting an unreal percentage from the field. Decent size for the point guard position. Has a ridiculous first step. Very tough to keep him out of the lane. Changes directions on a dime with the ball in his hands. One of the fastest players in the League. His legs are what make the Spurs go. Has a pretty unusual style for a point guard. Gets a ton of points in the paint and can score in a number of ways from in close. Beats his man off the dribble frequently. Has a reliable midrange jumper, but is still try to find his range from deep. Good distributor. Great in transition. Capable defender. Cerebral player. Won NBA Championships with the Spurs in 2003, 2005, and 2007. Leads by example. Incredibly aggressive--has tremendous self-confidence, but is highly coachable. Gregg Popovich has done an amazing job maximizing his strengths and keeping him under control. Two time All-Star. Father Tony was a professional basketball player overseas, as are his brothers TJ and Pierre.

Offense: One of the most dynamic offensive players in the game today. Gets almost half of his offense running the pick and roll, but also functions as a spot up shooter as well. Displays a nice looking jump shot from mid-range, and is trying to incorporate the three ball into his game, but isnt consistent at all with it yet. Doesnt get much elevation, which makes him hesitant to shoot with a hand in his face. Wont get a ton of catch and shoot opportunities. Does most of his shooting off the dribble. Displays a quick release and has no trouble getting his shot off from the midrange. Makes a living in the paint. Gets in the lane at a simply ludicrous rate for a point guard. Is essentially impossible to stay in front off. Goes left or right equally well, which is impressive. Even when a defender does manage to cut him off, hell simply change direction and go right to the rim. Knocks down a ton of floaters and short range jumpers. Would much rather go to the rim than pull up. Finishes at an extremely high rate despite his size. Goes to the line at a high rate and shoots an improvable percentage from there. A unique player in that he scores a ton of points in paint for from the point guard position. Does a good job getting his teammates involved as well. Has gotten better and better at minimizing turnovers. Solid passer who can execute in the half-court, but doesnt have amazing court vision. Not a selfish player, just not as instinctive a playmaker as some of the other top point guards in the league. Catalyzes San Antonios offense by drawing defenders off the dribble before dishing the ball back out to the perimeter. While the player he passes to may not take the shot, he creates numerous spot up opportunities for the players who receive subsequent swing passes. The oil that makes the engine run.

Defense: A talented defensive point guard who will hawk the ball the length of the floor and make some plays. Does a very good job using his feet and not his hands. Always in front of the play. Can keep up with any point guard in the game. Doesnt create many turnovers despite his quick feet and fast hands. Not very physical, but sound nonetheless. Isnt going to effectively contest shots due to his lack of size. Wont over commit when he is closing out on the perimeter. Turns long rebounds into layups. Always gets into position to receive the outlet immediately after the ball is secured.
Read full article

Jonathan Givony
@DraftExpress
Fresh off a breakout season in the NBA, Parker comes to Japan as a one of a kind commodity for a tournament like this. A case study for your typical American style point guard, Parker will be especially intriguing to follow as he highlights the differences for us between the NBA and International game.

In terms of sheer quickness and explosiveness, Parker is in a class of his own here in Japan when excluding Team USA. NBA defenders find it almost impossible to stay in front of him when he decides to make his way to the basket, so it will be fascinating to see how this translates over the World Championships and how much of Frances game will revolve around his ability to penetrate and score rather than running a traditional half-court offense as most of the other teams here will do. It will also be interesting to see how he performs without the benefit of playing next to the #1 player in the world in Tim Duncan.

Last year at the Eurobasket in Belgrade, Parker was absolutely atrocious early on in the tournament, to the point that he was benched and had the embarrassment of seeing his team play much better basketball without him. Despite getting going late, he averaged only 12 points on 34% shooting from the field and 21% from behind the 3-point line, and dished out 2.6 assists compared with 2.3 turnovers. Once his role was reduced, the French team took off, and without the pressure of being the absolute star for his team Parker returned to form and helped Les Bleus win the Bronze medal behind a stellar 25 point, 5 assist game in a win over Spain.

Parker must show better decision making ability in this tournament--especially in the clutch-- than he has so far in international play and even in the NBA playoffs when things really matter. His inability to consistently knock down the three pointer has been an Achilles heel for him in his career so far, and it will be fascinating to see how opposing teams defend him as this can be a major problem (not just for him, but for France in general) in the International game. Especially since his team doesnt have a great frontcourt presence in the most traditional sense. Even free throws are too often an issue for Parker, as evidenced by the 57% he shot from the line last summer in Belgrade. The French will only go as far as their star PG will led them, but they will need him to be consistent and under control.
Read full article