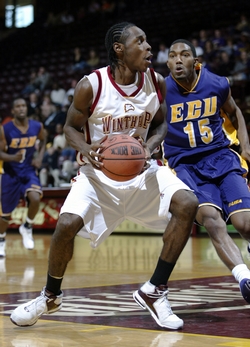 Joey Whelan
@DraftExpress
Torrell Martin played one of his best games of the season, in what was the biggest game of the year for Winthrop. He combined his soft touch around the basket and solid pull up jump shot to put together an attention grabbing offensive performance. Throw in a season high 11 rebounds, and Martin definitely did his best to catch the attention of scouts in the building on Friday.

In the early going, Martin picked up points by making strong cuts around the basket and driving to the rim hard. He is 6-5 at best, but elevates very well allowing him to shoot over taller players. His fantastic athleticism also allowed him to weave through defenses and hit acrobatic shots that many other players probably wouldnt be able to. He struggled from the perimeter, only hitting 2-7 shots from the outside, but has been a solid shooter from behind the arc, connecting on 39% of three point field goals this year.

Rebounding is a strong point of Martins game, as he pulls down over 5 rebounds per game, a good number for a wing player. He has long arms and is quick getting off the floor which allows him to win many balls that he probably shouldnt. Having a player who can crash from the wing like Martin does helped Winthrop tremendously against the Irish who have a tough front court.

Martin is a player still rising and trying to play himself into the draft picture. Hes undersized for the shooting guard position, and doesnt have very good ball-handling skills, but is athletic and has a very nice perimeter game. With a second round match up looming against a very good Oregon team, he as the chance to put together another solid performance in hopes of getting himself some more attention from scouts.
Read full article

Landry Fields
@DraftExpress
A largely unknown player to most college basketball fans around the country, Martin has a great chance to both show NCAA coaches that they erred in underrecruiting him as well as gain some significant momentum to his personal NBA aspirations with a big-time showdown against top-seeded Tennessee. Showing good athletic ability, nice defensive skills and a terrific stroke from the perimeter, Martin will likely again be the focal point of the Volunteer perimeter defense that should be on upset alert if they expect to make it to the next round. A classic streak shooter, if Martin heats up Winthrop will be a very tough team for any opponent to take down despite the low seed they will garner.
Read full article