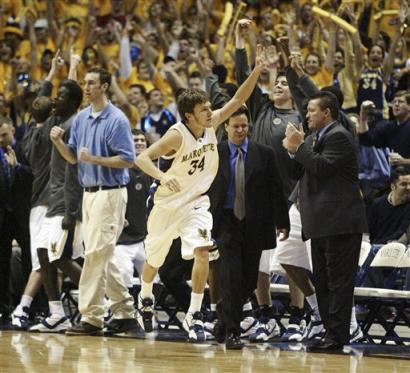 Matt Williams
@DraftExpress
Overview: A steady backup floor general who can knock down shots from the perimeter and get his teammates involved. Lacks ideal physical assets, and isnt tall enough to compensate for his lack of bulk. Isnt terribly fast, quick, or explosive, but does everything crisply. Shoots the ball well and runs the point efficiently. Had had a tremendous career at Marquette. Turned great collegiate point guard play and great shooting into an NBA contract. Despite his lack of minutes, he is a great third point guard.

Offense: Gets almost half of his offense off of pick and rolls, with the rest of his opportunities coming from fast breaks and spot ups. Does what hes good at and nothing more. Wont force anything. Pretty shooting stroke with good range. Will knock down his spot up jumpers from beyond the arc and from the midrange. Isnt aggressive off the dribble. Looks to move the ball rather attack. Great passer and steady ball handler. Not flashy, but efficient. Limited by his athleticism as a finisher, but isnt going to try and make a play at the rim unless he feels he has space. Lights out from the foul line. High basketball IQ. Knows how to create passing angles. Runs the pick and roll effectively with easy.

Defense: A defensive liability in many situations due to his lack of athleticism. Doesnt have the quickness to stay in from of quicker guards or the strength to defend the post. Wont create a lot of turnovers. Will scrap for loose balls. Not a very good rebounder. Has a hard time closing out shooters and bothering players that pull up over him. Will give his best effort hawking the ball up and down the floor, but doesnt have the physical assets to capitalize on his great attitude. Can match up very well with similarly gifted players.
Read full article

Strengths
The consummate point guard, Travis Diener comes from a basketball family and truly has the mental aspects of the game mastered. He understands how to get people the ball in the right situations, and how to get every last bit out of his natural tools.

Diener began his career as more of a distributor, in a supporting role to players like Dwyane Wade and Cordell Henry. Very early on, he showed the ability to effectively run an offense, use tempo to his advantage, and create scoring opportunities for others.

Where many guards with this creative ability struggle with decision making and commit more than their fair share of turnovers, Diener has always played relatively mistake-free basketball. His Ast/TO ratio never fell below 2.5/1 in his four years at Marquette.

During the early part of his career, Diener's offense generally came from spot-up shooting. He has textbook form on his jumper, and shot 41% from behind the arc while at Marquette. Diener helps himself in this area with an incredibly quick release, allowing him to get his shot off over many physically superior defenders.

As an upperclassman, Diener became Marquette's go-to scorer, averaging nearly 20 points per game his senior season. He is a threat to pull up for a long range bomb at almost any moment, and uses this to gain a step on defenders when heading to the basket.

Diener is very creative on the drive, utilizing floaters, changes of pace, and all sorts of other craft to get by defenders.

In terms of persona, there aren't many more competitive players out there. Diener has a confident fire about him, which some might even call cocky, and a desire to win above all else. You couldn't ask for a better lead guard in terms of attitude.

Weaknesses
Most of Travis Diener's weaknesses have to do with his physical tools, or lack thereof.

While Diener was able to score at a high clip at the college level, he definitely struggled against top tier athletes in Conference USA. While his creative abilities allowed him to get by in college, he will be facing an entirely different breed of athlete in the NBA. His first step isn't bad, he just doesn't have that explosiveness that you would like to see in an NBA point guard.

Even as a collegiate, Diener struggled to get all the way to the basket, and oftentimes scored on floaters or jumpers from the midrange. His ability to create may be stifled at the next level, simply because he won't be a major threat to take his man off the dribble.

Diener didn't do much strength training until late in his college career, and it shows on the floor. Weighing in at just 175 pounds, Diener will struggle to put the ball on the floor against the physical perimeter defenders of the NBA. Listed at 6-1, Diener will never be considered very big in terms of height either.

While it wouldn't be surprising if Diener was able to add some quickness if he were to make more of a commitment to the weight room, his ability to handle the quickness and athleticism of the NBA game is a question that will have to be answered if Diener is going to get drafted and/or stick with a team. Defensively, there are major questions regarding Diener's ability to defend his position at the next level.

While we are quick to label Diener as your consummate true point guard, his last two seasons at Marquette were strangely disappointing. As coach Tom Crean gave Diener total control on the floor, the offense became stagnant. Diener ended up dribbling way too much, and settling for bad shots.

It was surprising to see a team that featured such talented players as Diener, Steve Novak, and Dameon Mason struggle so much on the offensive end.

While there are numerous possible scenarios in which none of this rests on the shoulders of Travis Diener, he was the team's point guard, and a point guard with the reputation of making players around him better.

Competition
Diener played in the Conference USA, which has some solid competition at the top, but which was diluted by some very poor lower-tier programs. Against teams with more athletic guards, Diener tended to struggle.

Made a name for himself with a scintillating two games early in Marquette's 2003 final four run. Scored 29 points against Holy Cross, and followed that up with a 26 point effort against Missouri. Cooled off from the floor after that, but continued to run the team well. His name was made.

Broke out as a star as a sophomore, averaging nearly 19 points and 6 assists per game, while shooting 44.8% from behind the arc.

Dominant as a senior, until he fractured two fingers on his left hand in late February. Marquette collapsed without him, and Diener never made it back to the stage which jumpstarted his college career. Averaged nearly 20 points and 7 assists in 23 games.

Outlook
It's hard to write off a guy like Travis Diener, who has such a natural feel for the game. Sometimes athletic disadvantages aren't as important as they may seem. Diener certainly doesn't look the part of an NBA point guard, but people have had doubts about many skinny, unathletic kids. Look at where players like Dan Dickau and Luke Ridnour are these days. It will be imperative for Travis Diener to hit the weight room hard this summer, and he looks like a potential second round pick at the moment. Where he goes from there is anybody's guess, and we certainly aren't discounting the possibility of a long NBA career for Travis Diener.

Statistically speaking, it's very hard to find an NCAA PG who played for a major program and did so well in terms of scoring, assists, three point percentage, turnovers and free throw attempts over the course of a four year career and didn't at least get a chance to prove himself in the league.

Since he was not able to recover from his season ending injury in time for Portsmouth, a good showing at the Chicago pre-draft camp is imperative.

Facts
Travis has two cousins that played in Conference USA as well. Drake Diener just finished off a very successful career at DePaul, and Drew played for St. Louis.

Travis' uncle, Tom Diener, is an accomplished high school coach, recently coaching the US team to a win in the Nike Hoop Summit.
Read full article