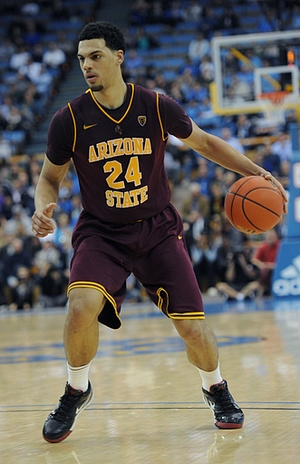 2010-2011 was a difficult season for Arizona State, as the team finished in last place in a weakened Pac-10 conference. One thing Sun Devil fans could be encouraged by was the play of sophomore Trent Lockett, who emerged as their leading scorer and was named a second-team All-Pac-10 selection.

Standing somewhere between 6-4 and 6-5, Lockett has average size for an NBA shooting guard, but possesses a strong frame and very good athleticism. He is one of the most explosive players in the Pac-10, capable of blowing by opponents with an excellent first step and finishing above the rim in impressive fashion.

On an Arizona State that operated at one of the slowest tempos in the NCAA, Lockett played an important role as their best athlete and shot-creator. He is very aggressive looking to get to the basket, particularly in transition, but also in the half-court. He gets to the free throw line at a very solid rate in turn, and converts an excellent 54% of his 2-point attempts.

Not a particularly prolific outside shooter, just 11% of Lockett's field goal attempts came from beyond the arc last year, as he much preferred to drive to the basket using his quick first step, polished footwork and strong frame.

He shows the ability to drive and finish with either hand, and rarely looks out of control with his forays to the rim, sporting a positive assist to turnover ratio, a testament to his strong feel for the game. Nevertheless, he still has room to improve on his ball-handling ability and all-around polish, as he does not appear to be a finished product at this stage.

An area where Lockett will be expected to show improvement this season is as a jump-shooter. He only converted 32% of his 3-pointers last season, taking just over one attempt per game. His shooting mechanics are not broken, but are a bit rigid, while he also shows just average touch.

Lockett was, interestingly enough, both more prolific and accurate shooting the ball off the dribble last year than with his feet set. He creates good separation with the nice elevation he gets here in the mid-range areaa weapon he can continue to hone down the road.

On the other end of the floor, Lockett is a bit harder to evaluate, as his team uses zone defenses almost exclusively. Nevertheless, there are some things to take away from his play here. For one, he shows a very high intensity level, moving his feet constantly and doing a nice job contesting shots. His lateral quickness is very good, and that, coupled with his strong frame, gives him a good foundation to build off. Because of how undersized Arizona State is, Lockett is occasionally asked to spend time guarding opposing big men, something he obviously struggles with due to his lack of size.

Lockett is a pretty anonymous name to most casual college basketball fans outside the Pac-12, but that could very well change this year. His athleticism, coupled with his effort level and shot-creating ability make him a pretty intriguing prospect. The fact that he was named a Pac-10 1st team All-Academic selection doesn't hurt either. If he can help his team win a few more games this season, he'll likely garner plenty of attention.
Read full article