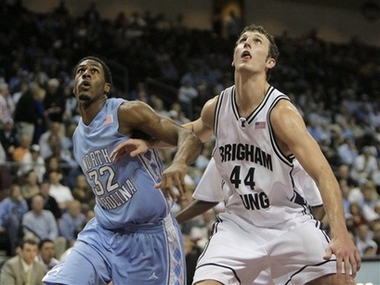 Jonathan Givony
@DraftExpress
Plaisted struggled to make his impact felt on the court consistently, just floating up and down aimlessly at times and not using his athleticism to finish particularly strong around the basket. You cant ignore his physical tools, but at the same time, youd like to see him make more use of it on the glass or defensively. Hes in this draft for good, so he really would serve himself well to bring the intensity level up a notch and having a strong showing in the last day of the camp.
Read full article

Active on both ends of the courtgood straight line explosivenessfootwork impressive, uses counters wellsolid frame, has ability to add the strength he needsmore comfortable with back-to-basket than face upshoots a dead ball type shot-soft, but lacking consistent rotationmust continue to improve face up shot, though he shows no hesitance to take itshot motion is compact, arm angle highshowed good intelligence with ballstrong decisive drives against longer, taller opponent, (Ryan Hollins.) Nice adjustments made while in air, using his off-arm and body to shield the ball and go for the finish.

Plaisted showed some things in this setting, especially in the 3-on-3. Not a great shot-maker at this point, Plaisted nonetheless showed confidence in his shot and consistency in his mechanics, a sure sign of focus in terms of working on that aspect of his game. Had a good matchup against Ryan Hollins, which tested his ability to operate against a larger, more experienced NBA opponent. Battled for position well, got to some balls, and made plays. Looked like he belonged on the court with his competition. A good, solid Orlando camp will be huge for him, as will the rule changes allowing for more players on the court, because Plaisteds offensive game is going to have to change substantially on the next level. If he can put up some quality hustle stats in these setting he can help himself.

Don MacLean: Trent I think is an NBA player. Weve helped him by simplifying the game, giving him more on the block. If you saw him in college it was all pound it, pound it, right shoulder. Everything was laying up, flippy, and scoopy. Now were trying to get him to turn it over. You saw it today where he went right at [Ryan] Hollins--you wouldnt have seen that out of him in college. The more he develops, which he will because hes a good listener and very coachable, the more hell do it.

The first week I spent a lot of time with him just talking about how he can be good at the next level, and it aint going to be by backing guys down and turning. He needs to improve his shooting to the point that when he does square a guy up at the next level, he can knock it down from fifteen feet every time. Hes gotten better in the last month at thatand athleticism-wise he jumps, he can really jump. Hes made a few plays where youre like holy @$#%. With his size, athleticism and his willingness to get better, I think hes going to be a good NBA player.
I wish I had another three months with him, because then I think he could be really good. Im not knocking the coaches at BYU, because they have to play the way they have to play to win games, theyre not worried about Trent Plaisteds draft status. But [because of that] this stuff is all new to Trent. I think the more he gets in the NBA environment, wherever he goes in the draft, I think theyll start with this stuff and in time hell be a good NBA player.
Read full article

Not quite the unknown he was made out to be by the stunned ESPN announcers that were assigned to cover his games, Plaisted was already considered an extremely intriguing prospect in NBA draft circles (including on our 2009 mock draft) following his freshman season. Last year he seemed to hit a wall, though, seeing his numbers fall off in every major category (and often looking soft, unfocused, and uninvolved when we saw him) making many wonder what this upcoming season might hold for him as far as improvement is concerned. Improvement is the key word here, since Plaisted seems to have made a huge leap in ability this past summer and has now engrained himself firmly in the NBA draft picture as long as he continues to stand-out from this point on.

Physically, there is a lot to like here. Blessed with excellent height at 6-11, complete with a decent frame, a nice wingspan, and terrific mobility, Plaisted is already in a rare class of big men in the NCAA. He runs the floor extremely well, is agile in the post, and can really get off the ground and finish plays above the rim. Making him all the more intriguing, though, is the fact that he is actually extremely skilled as well, particularly when it comes to the rare skill of scoring with his back to the basket.

Plaisted has a terrific feel for creating offense for himself in the post. He has nimble feet, beautiful footwork, and outstanding touch on his jump-hook shots all the way out to 10 feet. He prefers mostly going to his left hand (his stronger hand), but can spin quickly to either shoulder and drop in a gorgeous high-arching floater from a high vantage point that makes it very tough to stop. The speed in which he makes these moves (as well as the left-handed release) makes it all the more difficult to guard, and just to create even more of a challenge for his matchup, hes also very adept at sticking his shoulder into his man to create space, as well as using fakes, drop-steps, and little dunk-throughs from underneath, all in extremely patient fashion looking for the precise angle he covets. Watching him elegantly flip in hook shots off the glass at will all game long against Louisville and North Carolina was simply a thing of beauty.

More than just a back to the basket scorer, though, Plaisted has a few other things going for him as well. His excellent hands allow him to be a fairly solid rebounder when factoring in his other physical gifts, and hes also a pretty nice passer, blessed with a high basketball IQ. He rewarded his cutters on a few occasions by dropping off some very nice bounce passes, and on one other impressive sequence, brought the ball up the floor and got all the way to the rim for an intelligent finish after utilizing a brilliant pass-fake. His face up game is actually a part of his game that seems to have great potential for the next level, as weve seen him knock down mid-range jumpers in the past, and he showed a basic ability to get by his man with a quick first step and decent ball-handling skills as well. Still a bit on the skinny side, it seems like his most natural position at the next level will be at the power forward position.

In terms of weaknesses, Plaisted has his fair share. He struggled at times finishing around the basket through contact, clearly looking like he could use another 10-15 pounds on his lanky frame. Although he scores fairly easily for the most part with his back to the basket, hes not a banger, and you wonder if hell be able to get the same deep position he does in the paint in the NCAA as he will at the next level. He also at times unnecessarily switched hands from his right to his more natural left, even if the situation did not call for it. He clearly showed the ability to finish with either hand against Louisville and North Carolina, but getting more comfortable with his right hand will obviously make him even more deadly.

Defensively, hes a bit stuck between the 4 and the 5 at the moment, possibly a bit too big to hang with perimeter oriented PFs on the perimeter (although his lateral quickness leaves some room for optimism here), and maybe not strong enough to bang in the post on a consistent basis with some of the more physical centers that are becoming increasingly rare these days anyway. Derrick Caracter seemed to have his way with him in certain moments early in the Louisville game, so this is an area well have to continue to monitor in order to gauge just how good a prospect Plaisted really is. Continuing to rebound the ball strong will also be essential for his draft stock. More than anything really, Plaisted will have to show that his performances against North Carolina and Louisville were not a fluke.

All in all, though, we seem to have a very interesting prospect on our hands here, and it will be fascinating to keep track of him as he continues to progress throughout the season.
Read full article