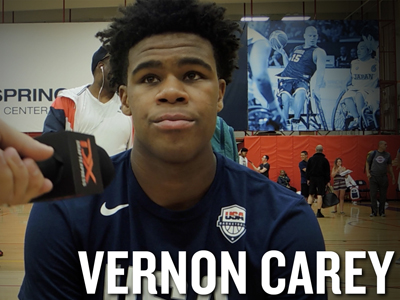 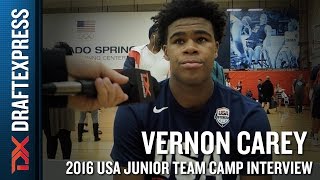 DraftExpress
@DraftExpress
Another player who grew in terms of height while dropping in the wingspan column relative to previous measurements, top 2019 prospect Vernon Carey's 259 pound frame is almost 25 pounds heavier than it was during the summer of 2016 at the Nike Elite 100.  The son of former NFL offensive tackle Vernon Carey Sr., the skilled big man has taken the EYBL by storm this season and already has the build of a far older player, but will need to be careful with his weight in the coming years.  His father played parts of his college career at Miami weighing over 360 pounds, and the younger Carey clearly inhereted his father's capacity to pack of mass, so even if his frame allows him to carry that weight well, he faces different unique challenges with his conditioning at 16 years old compared to many of his lanky, underdeveloped peers. He made the initial cut and is now among the 16 players competing for the final 12 spots.
Read full article