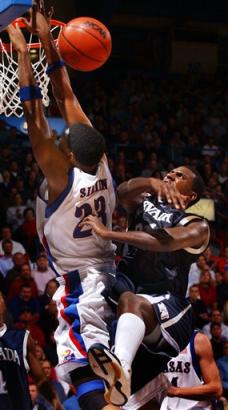 Strengths
Wayne Simien is one of the most successful players in recent college history, playing in two final fours with one more chance to win a national title yet to come. He is one of the top post scorers in the country, period. Seemingly relishing contact on the blocks, he can score with a variety of fundamental spin moves, hooks, fadeaways, and bank shots. He is willing to take bigger players in the mid/high post, while abusing the traditional PF on the low blocks. There aren't many college defenders that can slow Simien down. He has a very nice traditional PF frame, standing around 6'8 and weighing a chiseled 260 pounds. Most players simply aren't strong enough to keep him from doing what he wants on the blocks. Simien is a standout rebounder and a physical post defender as well. Simien's feel for how to score down low is what sets him apart from the pack. He is a very savvy, cerebral player, and understands how to get the ball in the air before help defenders can react. He has absolutely outstanding touch on the ball, and his post moves almost never do anything but swish. His midrange jumper is improving, and Simien has even started hitting an occasional three pointer. He is also an exceptional free throw shooter, and destroys teams by getting to the line multiple times in short amounts of time.

Weaknesses
While Simien is clearly one of the top college basketball players in the nation, it remains to be seen whether his game translates into the NBA. While he doesn't have any trouble scoring in college, he is a bit undersized to play PF in the league, and it's been well documented how unpopular undersized 4's are on draft night. Despite being quite fluid and running the floor well for a big man, his game is always going to be rooted in the post. He is an adequate athlete for a post banger, but doesn't have the burst, lateral quickness, or ballhandling ability to play out on the perimeter. This limits his upside. For every Elton Brand, there is a John Wallace, Marcus Fizer, or Corliss Williamson. To separate himself from this group, Simien is going to have to prove that he can defend NBA big men. He has the strength and nature to bang with anybody, but he may not have the length. He is not a shotblocker, even on the college level. The other weakness to talk about is his tendency to get injured, which has plagued him most of his career. Simien has had recurring shoulder problems, and missed time due to injury as recently as January. Other than these two issues, there is little not to like about Simien. However, these aren't minor gripes. It's not good to see a player who will be forced to rely on brute strength and physicality come up lame so often.


Competition
Simien plays in the Big XII, perhaps the most physical conference in the country. He routinely manhandles teams with loads of physical, nasty big men, such as Texas, Oklahoma, and Oklahoma State.

Outlook
Simien's draft status is most likley dependant on how confident a team is about his shoulder problems. Without them, Wayne Simien is a solid late lotto/mid first rounder. He has the scoring tools to be an effective scorer in the NBA. Unfortunately, injury concerns may knock him down the board a dozen spots or so. I can't see a scenario where he falls out of the first round in 2005.

Comments
This profile has yet to be completed.