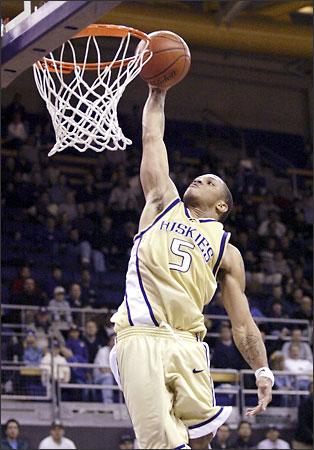 Scott Nadler
@DraftExpress
On the other side of the ball, the top player for Albuquerque was clearly Will Conroy, also in large part thanks to the excellent shooting display he put on. Conroys shot was looking about as good as weve ever seen, he went 4-6 from beyond the arc to go along with 26 points and 11 assists, as well as 5 turnovers and 6 rebounds, playing all 48 minutes. Hes shooting 37% from beyond the arc on the season, on quite a few attempts, so its probably safe to say that his shot has improved from his time in college, where he was known as a mediocre shooter. He also did a very good job running his team in transition, making some crisp passes, as well as some very nice post-entry looks, but forced the issue a little bit too much in the half-court, which led to quite a few turnovers. This has always been Conroys biggest problem, and is clearly the number one issue holding him back from making an NBA team. Unfortunately hes turning the ball over more than ever this season. If he can just cut down on the 2-3 careless decisions he makes with the ball every game hed be in much better shape. Hes still not the greatest athlete around, relying too much on his strength rather than on pure quickness or explosiveness. All things considered, though, Conroy has to be looked at as one of the better point guards the D-League has to offer.
Read full article

Jonathan Givony
@DraftExpress
Conroy is going into his fourth D-League campaign after racking up over 100 D-League games of experience. He has very little to show for it in terms of NBA money earned, but will again try to turn double-digit assists averages, decent scoring, a high turnover rate and average perimeter shooting ability into a 10-day contract. At this level, you cant argue with the leadership he brings to the table.
Read full article

Strengths
A walk-on when he arrived at the University of Washington, Conroy developed into one of the best passers in the NCAA by his senior season. Conroy averaged 6.4 assists per game as a senior to lead the Pac-10 and rank in the top 20 nationally. Conroy became the UW's all-time leading assister as a season, handing out 515 assists in his career. His 209 assists in 2004-05 were also a school record.

Conroy was at his best in transition, where the Huskies were lethal against opposing teams. He controlled tempo and got the ball to the myriad scorers he teamed with. He has great court vision and puts passes on the money, giving his teammates a chance to get good shots. When he gets into the lane, Conroy usually looks for his own shot, and he made an impressive 56.4% of his two-point shots. He likes to use a floater in the lane to much success.

Defensively, Conroy has the potential to become a standout one-on-one defender. Though just 6-2, he is solidly built and plays opposing point guards physically. Not exceptionally quick, Conroy moves well laterally and did a good job of containing penetration despite the pressure the Huskies put on ballhandlers far away from the basket.

Leadership is Conroy's strongest asset, and was the subject of countless columns in local newspapers that became repetitive by the end of his senior season. Conroy had the complete respect of his teammates and kept the Huskies together on and off the court. He had the ability to score more than he did as a senior (after scoring 12+ points per game as a sophomore and junior, he averaged just 9.4 as a senior), but subverted his ego in favor of a pass-first style and the good of his team. After the season, Conroy earned co-team MVP honors as well as the Most Inspirational award.

Weaknesses
Conroy's biggest issue has been turnovers. He averaged 2.8 per game as a senior, committing them on 25% of his possessions. Conroy has a tendency to try to do too much with the basketball at times, trying to thread the needle with passes when a lane is not available.

Over his career, Conroy never developed his 3-point shooting. He hit 39.7% as a sophomore, but dropped to 31.6% as a junior and 30.3% as a senior. He will have to work to develop NBA range to keep opposing defenders from sagging off of him and double-teaming. At the free-throw line, Conroy is only good, not great. He hit 76.1% of his attempts from the line as a senior.

As well as he defends one-on-one, Conroy is not a great team defender. He also doesn't play the passing lanes, averaging less than a steal per game as a junior and a senior, a very low mark for an NCAA point guard.


Competition
Backed up as a freshman, averaging 2.5 points and 1.6 assists.  Improved dramatically as a sophomore, upping those averages to 12.7 points and 4.0 assists as a full-time starter. Scored a career-high 32 points on Dec. 2, 2002 at Gonzaga.  As a junior, scored 19 points and handed out eight assists on Jan. 29 win over Arizona. Scored 29 points in overtime loss to UCLA on Jan. 11. Scored 17 points on 7-for-10 shooting in NCAA Tournament vs. UAB.  Recorded three double-doubles as a senior. Handed out a career-high 14 assists on Mar. 3 vs. California. Had 12 points and four key 3-pointers in Pac-10 Championship game against Arizona. Handed out 10 assists in NCAA Tournament vs. Pacific. Had 10 points and eight assists vs. Louisville in Sweet Sixteen.

Outlook
Conroy went to the NBA's Portsmouth Pre-Draft Camp as a distinct longshot to be drafted, but his performance in that tournament (he had 16 assists in the finale and was named to DraftExpress' All-Portsmouth team) caught the eye of scouts and earned him an invitation to the Chicago Pre-Draft Camp, where he again played well, scoring 17 points and handing out six assists in one game. He has put himself in the mix for the second round and presumably assured himself a long look even if he is not drafted.

Comments
When Conroy was a freshman, I didn't see his potential. I saw a guy missing a lot of shots, turning the ball over and struggling to make the adjustment to the NCAA level at the defensive end of the court. Boy, was I wrong. By his sophomore year, Conroy had established himself as a Pac-10-quality starter, and he continued to develop from there. While Nate Robinson drew the headlines for the UW's dramatic turnaround from a team that missed the Pac-10 Tournament in Conroy's sophomore year to the conference's tournament champions and a number one seed in the NCAA Tournament, it was Conroy that was the heart of the team.

Co-Team MVP and Most Inspirational as a senior.

Passed up scholarship offers elsewhere to walk on at UW, but received a scholarship before the start of his freshman season.
Read full article