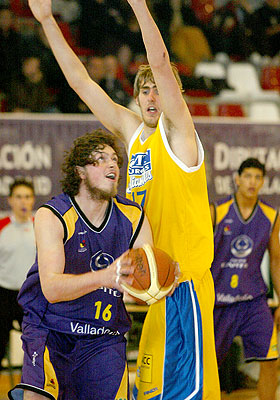 Luis Fernández
@DraftExpress
We hadn't seen Driesen since back in the 2005 U-18 championships, a sort of coming out party for him, where he fed the intrigue with a very nice perimeter stroke for a seven-footer. But that was virtually everything he did on the court, spot-up long-range jumpers. You can tell Estudiantes is trying to increase his versatility and array of weapons, although he still has a long ways to go. Actually, whenever he would have shot the ball without a second thought from the three point line in the past, now he often contains himself even if he's fully open.

Apparently, the mantra for him is to go inside. Driesen has gained significant strength in the past couple of years, but there's still work to do on that regard. He's rather active in the low post, but his footwork looks unpolished and his moves lack fluidity. He still doesn't show much ability to release hook shots, so in the end the usual outcome is a turnaround jumper, being able to use a slight fade away move to create space. He's also showing some timid attempts of putting the ball on the floor, usually with the right hand, but getting mixed results.

Decently athletic for his size, enjoying a good wingspan, he's a solid rebounder and has some interesting defensive tools, although again his lack of strength hurts him in this department. Combine that with his offensive limitations, and chances are we will still have to wait until we see him in the ACB League.
Read full article

The European Junior (U-18) Championships: The Centers

Luis Fernández
@DraftExpress
What should be a exception regarding big men, surely doesnt sound that way for many people when talking about Europeans; a 7-1 skinny shooter is just about what Yannick Driesen currently is. Indeed, we could stop right here, carry on with the next guy, and you wouldnt miss that much of significant information about this Belgian.

At this point, you will rarely see him doing anything else in the offensive end other than firing jumpers. He never puts the ball on the floor against the slightest opposition, so its easy to figure out that his shot is always static. He enjoys a rather quick release, with not the most orthodox mechanics, placing his arms a bit closer than usual, although it seems polished through practice.

Despite his length, he doesnt frequent the low post. The few times he asks for the ball and receives there is just to give it back to the perimeter. Nevertheless, once he did deliver a nice mid-hook shot just after receiving the ball from about 10 feet, and it was good. He also netted a one-handed shot near the basket, looking like he enjoyed a fairly good soft touch. Indeed he seems to feature some nice skills to develop an effective low post game.

Yannick is not a bad passer facing the basket, appearing to feature a decent basketball IQ. Hes not awfully athletic, but hes rather gifted considering his size, and features really nice mobility, enjoying accurate lateral quickness. Hes potentially a good intimidator, and already showed his credentials in Belgrade by ranking fourth in blocked shots, but he should work on his timing to keep improving.

A 1988 guy, so very young, with intriguing enough characteristics not to forget his name. Unfortunately, he wont be able to showcase his potential improvement next summer in the Division A of the European Junior Championship, as Belgium lost the category, being forced to play in Division B next year.
Read full article