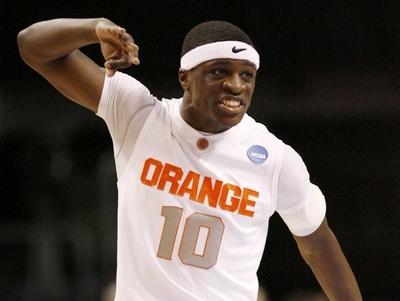 Jonathan Givony
@DraftExpress
Tim Grover and Mike Procopio are working hard in Chicago helping a dozen prospects or so prepare for their NBA draft private workouts, including Jordan Hill, Jonny Flynn and Chase Budinger. We were able to spend the weekend with them and get a firsthand look at what they are working on with the players in their gym. Here is what we learned.

Workout footage produced by Tad Hathaway of 312Media. 312 Media is a cutting-edge, Emmy-nominated digital production company based in Chicago. For more information on their background and capabilities, shoot them an e-mail.

Hill appears to be working very hard, and the staff is pleased with the progress hes making.

Comparing him with other prospects weve evaluated in these types of settings over the years, its pretty obvious that Hill started playing basketball later than most, as hes not a very polished player at this point in time. Thats part of what makes him so intriguing, thoughhes a late-bloomer who still has a ton of room to improve, but was still able to be productive at Arizona this season, to the tune of 18 points and 11 rebounds per game.

The biggest revelation to come out of these workouts was the way Hill was shooting the ball. His stroke looked fairly consistent from 17-18 feet out, and he was even able to knock down a couple of college and NBA range 3s. He needs to improve the quickness of his release and continue to work on his consistency, but having a solid mid-range jumper in his arsenal will surely help him make the transition to playing quality minutes in the NBA.

Another area of intrigue lies in the basic skills Hill shows facing the basket from the mid-post. Mike Procopio has been working extensively with Hill on his footwork and ability to attack his man off the dribble from 12 to 15 feetas you can see in the workout video. Considering the quickness advantage he will likely enjoy over most of his matchups, this could develop into a very useful weapon for Hill down the road. He was finishing in a variety of ways, often with a powerful dunk, but also with a series of runners and floaters, trying to improve his touch, particularly with his left hand, which needs work.

While Hills frame looks solid, its pretty clear that hell have to hit the weight room if hes to be able to effectively compete with some of the more physically developed big men hell face in the NBA. He lacks strength in his lower body in particular, and this, coupled with his below average post-moves makes him fairly limited at this point with his back to the basket. This is probably not going to be a major part of his game in the NBA, but considering the direction the league is headingwhere quickness, toughness and aggressiveness are far more important than brute forceplayers like Hill are becoming very much en vogue. It would likely benefit Hill tremendously to play in an up-tempo offense where he can utilize his athleticism in transition, alongside a point guard who is capable of creating scoring opportunities for him.

Point guards like Jonny Flynn earn their paychecks on the court winning games in five on five settings, not in private workouts. Fortunately for Flynn, that was exactly what he was able to do in the month of March, leading his team to the Sweet 16. Regardless of the limitations of this evaluation, there were a couple of specific things we could learn or be reminded about here in Chicago.

As we saw at Syracuse, Flynn is one of the most explosive point guards in this draft, right in the same class as Brandon Jennings and Ty Lawson. His shiftiness in the open floor and pure speed getting up and down the court was very impressive, as were his ball-handling skills. While there wasnt anything to take away from this setting in terms of evaluating his playmaking skills or court vision, it was great to see what a natural leader Flynn is around his cohorts. He looked incredibly focused and professional at all times, and really appears to have the ideal personality you look for at his position, as hes extremely engaging and charismatic.

From a skills standpoint, Flynn shot the ball just OK in the two days we saw him. His mechanics are fine and there doesnt appear to be anything broke about his shot, but he didnt seem to be all that consistent with the jumpers we saw him put up. As youll see in the interview, he seems to recognize the importance of improving this part of his game, and as long as he puts the work in, he will probably be fine.

The one thing that immediately stands out about Flynn when you first meet him is his size. It will be interesting to see how tall he measures out at the combine and whether that has any influence on his draft stock. He did seem to get getting after it quite a bit in the three on three portion of the workout, which will definitely help his cause on the defensive end.

Flynn has his fans in the lottery right now, and would appear to be in excellent shape one month before the draft.

While we were able to see most of the other players twice, Budinger was only working out the first day. The first thing you notice about him is his sizehe really does have great height to play on the wing, at either the 2 or the 3. His frame also appears to be capable of adding weight, and from what were hearing hes also measuring out extremely well on all the various agility tests hes taken in the workouts hes been at.

In the drills, Budinger was outstanding, showing picture-perfect shooting mechanics and knocking down his jumpers at an impressive rate. He was slightly less impressive in the three on three portion of the workout, though, having a difficult time matching up with the extremely strong and athletic Paul Harris, who was clearly a man on a mission in these two days. Defensively, Budinger will need to improve on his fundamentals, as he often appears too upright in his stance.

Budinger is an interesting prospect in this draft, as he brings a nice combination of upside and current productivity to the table. You know what youre getting from him in terms of his ability to shoot the ball, operate in a team setting, and generally know how to play the game. Its possible that a good coach in the NBA will be able to extract even more from at the next level, though, especially if he can get him to play with more toughness and aggressiveness than hes currently known for.

Out of all the players here, Paul Harris may have left the best impression on us relative to our expectations going in. Harris is incredibly impressive from a physical standpoint first and foremost, boasting a chiseled frame, strong athleticism and extremely long arms, but he also looked pretty good from a skills standpoint as well.

Harris has been working quite a bit on his shooting mechanics over the past few weeks with shooting coach Tim Sullivan, and the results were fairly impressive from what we were able to see. He made shots at a pretty good rate (much better than we thought he would at least), both spotting up and off the dribble. While his ball-handling skills looked improvable, its pretty safe to say that no one is going to sign him for what he does on the offensive end of the floor.

Defensively is where Harris really shined, showing absolute lock-down ability on anyone he was asked to guard, and really making his presence felt with his combination of toughness and tenacity. The theme of this years NBA playoffs for us probably is just how incredibly physical the games are, and if there was any player that embodied that spirit in this gym, it was Harris. Mike Procopio compares him to the likes of Tony Allen and DeShawn Stevenson, and after seeing him in action in this setting, it wasnt hard to see why.

It will be interesting to see what the reaction is to Harris once he starts making the rounds for private workouts. Its not tough to see some NBA coach falling in love with what he could bring to practice day in and day out, and the success of players like Dahntay Jones this season could help Harris out.

Beverley is a guy well probably focus on more heavily when we get a chance to evaluate him at the Reebok EuroCamp in Treviso in two weeks, but he left a nice impression from what we were able to see here. Hes a lanky guard with a skinny frame and a nice wingspan, as well as solid athletic ability. His main virtue lies in his very quick and aggressive first step, which allows him to create his own shot and get into the paint at a good rate. Beverleys jumper wasnt falling very consistently from NBA range, but he appears to have the ability to make shots, particularly off the dribble. Defensively he looked pretty focused and intense. Beverley took an interesting route to the NBA draft, as youll hear in the interview we conducted with him. The year he spent in the Ukraine obviously helped him mature quite a bit as a person.
Read Next...