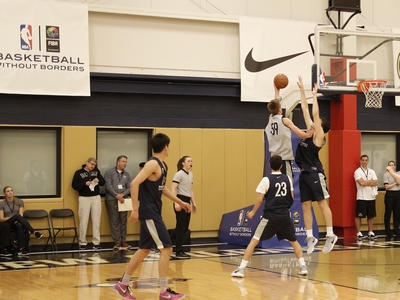 Jonathan Givony
@DraftExpress
We take a look at seven of the best forward and big men prospects to emerge at the 2017 Basketball Without Borders Global Camp held in New Orleans during All-Star Weekend.

Strengths:
-Well-proportioned, ripped 227 pound frame that should add plenty of weight in time
-Very long 7'2 ½ wingspan
-Terrific athlete. Measured the highest vertical leap of the group at 38 inches, that plus his length gives him good potential as a rebounder/shot-blocker
-Impressive finishing around the basket off two feet
-Attacks the rim aggressively looking for contact. Can catch and elevate off the pick and roll
-Has unconventional shooting mechanics, but fairly soft touch from the free throw line. Even shows some potential shooting from beyond the arc in drills
-Plays with a high intensity level. More than willing to use his tools to his advantage on both ends of the floor
-Knows who he is and embraces it. Feel for the game is not bad
-Covers ground defensively, shows multi-positional versatility
-Draws rave reviews from coaches for his intelligence, work ethic and attitude

Weaknesses:
-Undersized for a center at 6'7 without shoes
-Skill-level is extremely unpolished, especially offensively. Poor footwork, no countermoves
-Better finishing in stride than he is gathering up from a standstill
-Awkward shooting mechanics, both in his lower and upper body. Hitch at the end of his stroke. Doesn't have any ability to make shots in game settings
-Lacks experience in five on five settings. Game moves a little bit fast for him right now
-Has great tools and competitiveness defensively, but fundamentals and awareness leave a lot to be desired. Relies heavily on his athleticism to get the job done

Outlook: Tchamwa Tchatchoua took a little while to get his feet wet in the five on five action, but really came alive as the Camp went on. He was one of the most impressive big men athletically at the BWB, and also played extremely hard on top of that. One of the first players the NBA invited to their Global Academy in Australia, Tchamwa Tchatchoua is in a great environment to continue to improve and seems to have terrific intangibles, which should help him reach his full potential.

Strengths:
-Great size for a big man at 6'10 without shoes. Measured a solid 7'1 wingspan and 8'11 standing reach
-Mobile big man who can run the floor, is quick off his feet and covers ground well
-Has a versatile and fairly polished skill-level, especially considering his late bloomer status.
-Has great hands and is a very reliable finisher around the basket, even from decent vantage points. Moves off the ball intelligently
-Can make a mid-range jumper with very soft touch. Also effective from the free throw line. Even made a corner 3
-Smart and unselfish. Makes the extra pass
-Competitive defensively. Doesn't let opposing big men push him around without putting up a fight. Has some toughness to him
-Shows very nice timing as a rim protector. Has some ability to move his feet on the perimeter as well

Weaknesses:
-Only weighs 198 pounds at the moment. Doesn't have a great frame and there are question marks about how strong he can get without sacrificing his excellent mobility
-Has a low release point on his jumper, and a bit of a windup. A lot going on with his jumper, even if it eventually comes out of his hand nicely with good touch. Needs to speed up his release
-Mobile, but not incredibly explosive. Lacks elite level athleticism to be considered a top-shelf prospect

Outlook: Epperson was a total unknown in Australia (invited to their national team but cut) prior to arriving in the States to play AAU last July, despite being the son of a standout College player (Ken Epperson at Toledo) who played professionally at a high level in the NBL as well. He's since established himself as one of the best men in high school basketball. Epperson had a very strong camp in New Orleans, showing a very high skill level on both ends of the floor. He is without a doubt an outstanding prospect for college and the international game. We'll have to see how his body evolves over the next few years to get a better gauge for his NBA prospects, but there's a lot to like about the improvement he's shown in the past year or so.

Strengths:
-Measured 7'1 without shoes with a 7'3 1/2 wingspan and a 9'1 ½ standing reach
-Has a well-proportioned 233 pound frame, and big hands (tied for the biggest at the camp)
-Fluid/coordinated athlete. Shows some quickness getting off his feet
-Has a very high skill-level for a 16 year old big man
-Shows excellent touch around the basket and extending out to mid-range.
-Knocks down jumpers in the 15-18 foot range regularly. Should be able to extend his range out in time as he has good form and follow-through, even shooting off the dribble
-Good feel for the game. Stays within himself. Looks used to playing against older players.

Weaknesses:
-Not an elite physical specimen in terms of quick-twitch explosiveness. A lot of his height is in his neck. Somewhat narrow in his shoulders
-Lacks a degree of pop elevating from a stand-still
-Shies away from contact at times. Finesse oriented with his finishes
-Can get pushed around on the glass. Not an overly prolific rebounder
-Has some question marks he'll have to answer defensively as the level of competition stiffens, both as a rim protector and stepping out of the paint.

Outlook: Koprivica had a somewhat quiet camp, which is to be expected as he was one of the younger players in attendance. He showed a high skill-level and basketball IQ on both ends of the floor regardless and has an impressive framework of talent to build off in the long term.

Outlook: Shittu didn't participate due to injury, but it's notable to mention that he was officially measured at 6'10 1/2 without shoes, with a 7'1 wingspan. We've always felt that he will end up playing mostly at center in college, and he actually has the size to do it if this measurement is accurate.

Outlook: Bassey didn't participate due to injury, but it's notable to mention that he measured 6'10 without shoes, with a 7'3 wingspan and 220 pounds frame. He undoubtedly has the size and length to play the center position in college. He opened some eyes by just walking around the camp, as he passes the eye test and then some.

Strengths:
-Measured out bigger than expected, at 6'8 without shoes, with a 6'11 wingspan. Big enough to play power forward
-Solid 218 pound frame that will continue to fill out
-Fluid athlete, can play above the rim in space
-Very good in the open floor. Likes to take rebounds off the defensive glass and go coast to coast
-Has a good feel for the game. Passes ahead. Finds the open man. Can drive and dish.
-Good ball-handler. Has a strong first step, crisp footwork and powerful spin moves
-Good scoring instincts overall. Knows how to put the ball in the basket, Should be able to figure out how to become more efficient in time
-Shot the ball better in-game here than he is in other settings
-Active defensively. Competitive. Has good feet. Has rebounded at a high rate everywhere he's played. Plays with energy

Weaknesses:
-Has average tools for the power forward position in terms of size and length
-Not freakishly athletic to compensate
-Shooting mechanics leave a lot to be desired. Tends to jump forward, shoot on the way down, or release the ball with side spin rotation
-Will struggle to translate his effectiveness as a scorer without a consistent jumper
-Has yet to demonstrate which position he will guard at the highest levels

Outlook: Martinez is the best player in Spain in his generation, and has been arguably the most productive '99-born player in Europe as a whole outside of a handful of players, which says something. We'll have to see about what the step up to the pro level with Barcelona does to his productivity, but he's someone to monitor at the very least, as he has some interesting characteristics he can build off.

Outlook: Sjolund sat out much of the camp with a foot injury. When he did step on the court, he showed much of the talent we were able to see at the BWB Europe, which is already earning him significant recruiting attention from a few top-flight NCAA programs. Sjolund continues to grow and is now 6'8 without shoes with a 6'10 wingspan, giving him ample size to play the 4 in college if that's what's asked of him.

His skill-set is that of a 3, though, as he has a very smooth shooting stroke both with his feet set and off the dribble that continues to improve. He's also a very fluid athlete with impressive explosiveness. He makes the extra pass and has a solid feel for the game, even if his ball-handling skills remain a work in progress.

Sjolund's body remains weak at just 182 pounds, but he has a frame that suggests he will fill out in time. He is a tough and competitive kid despite his lack of strength and somewhat shy demeanor, and it remains bewildering that he's considered such a lowly regarded recruit by most scouting services here in the US. That will likely change at some point, as soon as he gets a little more exposure. His bloodlines are good and he looks to be making solid progress with his game based on the little we could see when he stepped on the court despite his injury (he couldn't help himself he said).