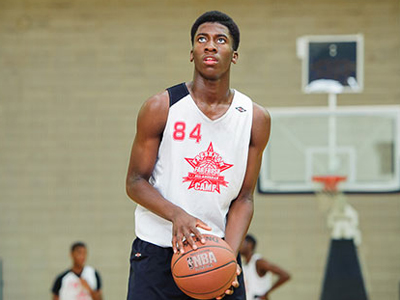 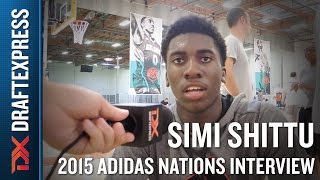 Outlook: Shittu didn't participate due to injury, but it's notable to mention that he was officially measured at 6'10 1/2 without shoes, with a 7'1 wingspan. We've always felt that he will end up playing mostly at center in college, and he actually has the size to do it if this measurement is accurate.
Read full article

Matt Williams
@DraftExpress
Shittu is perhaps poised to make the most immediate impact, as the 6'9 power forward has long been hailed as one of the top prospects in the 2018 high school class, and has quite a bit of experience in FIBA settings, the Nike EYBL Circuit, and three separate showings at adidas Nations the past three years. Shittu struggled at the FIBA U17 World Championship in Zaragoza last summer, making just 41% of his 2-point attempts and 37% of his free throws, but has rebranded himself as somewhat of a point forward this year in high school with Vermont Academy. It will be interesting to see how his perimeter shooting and overall skill-level is evolving, as he's already a gifted athlete with a terrific frame who rebounds extremely well and guards multiple positions.
Read full article

Strengths
-Has a man's body at age 16.
-Powerful athlete
-Plays very hard. All over the glass. Will put his body on the line defensively
-Strong first step in a straight line
-Draws fouls at a great rate. Too quick and aggressive for most big men this age to handle
-Tremendous offensive rebounder. 6.7 per-40 at the U17s. 6.6 career in 31 games in DX database
-Has the makings of a multi-positional defender
-Gets in the passing lanes exceptionally well. 6.2 per-40 at U17s. 3.6 per-40 career

Weaknesses
-Really struggled offensively at the U17s. Shot just 41% for 2 and 37% from the free throw line
-Still largely the same player he's been the past two years. Jump-shot doesn't seem to have made much progress
-Doesn't have great touch around the basket
-Mostly a straight line driver. Advanced ball-handling skills need work
-No left hand on drives or finishes
-Somewhat stuck between the power forward and center positions offensively. 7-foot wingspan means he'll likely have to guard perimeter players long-term if he doesn't grow
-Has an average feel for the game. Tries to force his way into traffic with his head down looking for fouls. Runs into brick walls.
-Doesn't have great fundamentals defensively. Doesn't do much work early. Allows opponents to get deep post-position on him without resistance. Got posted up quite a bit at the U17s with a good amount of success

Outlook Shittu, a very highly regarded player in North America, had a fairly disappointing tournament by his standards. He had a very difficult time scoring efficiently, and while his energy level was very high, he struggled defensively as well. He appears to have picked up some bad habits the last few years fundamentally that he'll need to shake, as long term he won't be able to rely on his tremendous combination of quickness and power that allows him to dominate AAU games as an undersized center. He'll have to improve his skill-level and feel for the game in the half-court as the competition level stiffens, but he still has some very good attributes to build off. It was recently announced that Shittu will be leaving Montverde Academy for his final two years of high school basketball.
Read full article

The youngest player at Nike Global Challenge at age 15, Shittu fit right in physically and, as he always does, played with constant energy on both ends of the floor. Shittu hauled in an outrageous 8.9 offensive rebounds per 40 minutes pace adjusted, a testament to his motor and physical tools at 6' 9 with a 7' wingspan and a fairly developed frame for his age.

Shittu was all over the place, both good and bad. While his energy and effort certainly help on the offensive glass, Shittu is very out of control when he touches the ball offensively. He doesn't have a great feel for who he is as a player and will force up contested jumpers or drive into a pack of defenders without a plan (5.2 turnovers per 40 minutes pace adjusted).

For all of his out of control maneuvers, however, Shittu will make a play or two that cause you to wonder how he'll look in a year or two with more polish and experience.

Shittu showed outstanding body control on a couple of half court drive and finishes, one featuring a quick left to right behind the back dribble and the other a smooth spin move and finish in traffic.

Again, Shittu does a lot of wild things with the ball in the half court and is more fluid than vertically explosive at this stage, but it's those one or two plays that show his talent level for his age.

Shittu also appeared to have made some very slight improvements in his jump shot as well. He still features a very slow release with a varying release point, but his feet aren't nearly as wide as they have been in the past. Although the results weren't there, the ball is starting to come out of Shittu's hand more fluidly at the free throw line.

On the defensive end, Shittu was a mixed bag, making plays with his length and quickness off the ball, but also finding himself in a bit of foul trouble. As is the case with virtually every 15-year-old on the planet, Shittu doesn't have great fundamentals on the defensive end. Shittu is able to get by with his length, quickness and motor, however.

Overall Shittu is still more of an out of control energy forward at this stage, but all of the high-level experience he's gotten at such a young age will serve him well and he'll most likely look like a much more polished prospect as he gets older.
Read full article

Mike Schmitz
@Mike_Schmitz
Simi Shittu, 6-8, SF/PF, Corpus Christi High School, Canada, 1999
Strengths
-Very impressive frame. Long arms. Mature physically for his age. Body should fill out substantially in time
-Long arms
-Competitive defensively. Gets blocks, offensive rebounds. Very active. Should be able to develop into a multi-positional defender. Did not look out of place on the perimeter.
-Always in attack mode. Tries to dunk on people. Takes ball strong to the rim in a straight line.
Weaknesses
-Good not great athlete
-Has a very ugly jump-shot. Shoots on way down. Sometimes bends his knees excessively
-Crude ball-handler at this stage. Tries to attack his man but has a loose handle at this stage. Can't change directions with the ball
-Average decision maker
Outlook
Has a very impressive physique and plays with a great motor. Skill-level is a major work in progress. Will he grow and become a power forward? Or can he continue to hone his perimeter game and become a full-time 3? Needs to revamp his outside shot and start over. Will struggle to reach his potential without a consistent jump-shot.
Read full article