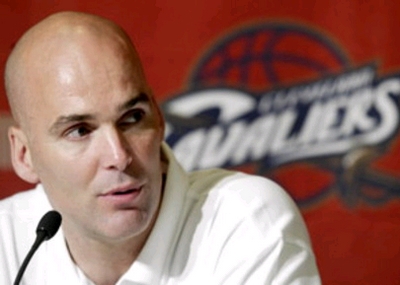 Sham
@DraftExpress
Danny Ferry has gotten it wrong for a while now. In trying to surround the most awe-inspiring player in twenty years with enough talent to compete for a title, Ferry has waddled into a bevy of anti-climactic and ill-founded moves, which somehow saw the Cavaliers land an NBA Finals appearance, yet never really saw them as feared competitors. These retreads and nobodies have included such seminal names as Larry Hughes, Donyell Marshall, Eric Snow, Ira Newble, Damon Jones, Scot Pollard, Alan Henderson, David Wesley, Martynas Andriuskevicius, Shannon Brown, Cedric Simmons.....and so on. Armed with max cap room only four summers ago, only one of the players that it was used on (Zydrunas Ilgauskas) is still with the Cavaliers, or even still in an NBA rotation. The others - Marshall, Hughes and Jones - now wave towels for a living.

This time last year, on January 30th 2008 versus the Portland Trail Blazers, the Cavaliers "boasted" a starting lineup of Larry Hughes, Ira Newble, LeBron James, Drew Gooden and Zydrunas Ilgauskas. Devin Brown and Daniel Gibson were the main contributors off the bench, with Anderson Varejao inactive and Sasha Pavlovic disinterested. Somehow, this supporting cast was supposed to propel one of the finest talents in the sports history in a championship winner. Perhaps unsurprisingly, it didn't. Not even close.

However, Ferry did something I wasn't expecting - he got it right. In the three-way trade with Chicago and Seattle at the last trade deadline, Ferry turned unwanted parts into Delonte West and Wally Szczerbiak, giving the Cavaliers a starting guard and an offensive focus for the second unit. They also got an anchor for their interior defense, in Ben Wallace, and all it cost them were parts they didn't want anyway. After this, Ferry turned more unwanted spare parts into Maurice Williams, giving the Cavaliers a brand new starting backcourt, while giving up nothing of any significant value. To put it into perspective, the Cavaliers upgraded their backcourt about tenfold in those two deals, with the best outgoing player being Joe Smith. Joe freakin' Smith.

The moves didn't end there. On draft night, Ferry addressed his weakest position (power forward) with both of his draft picks, selecting J.J. Hickson in the first round and Darnell Jackson in the second, both of whom provide some interior offense and defense from the frontcourt positions. Ferry also brought in the consistently overlooked Tarence Kinsey, who is due for a Von Wafer-like breakout one of these days. (Note: for argument's sake, discount the one he's already had.)

Cleveland has also been bolstered by internal improvement, as Ben Wallace decided to start trying again, and Anderson Varejao has gone on to become the player that he would have been last year, if only he could have been bothered. Even Sasha Pavlovic is effective again, as long as he's starting. On the flip side, Lorenzen Wright is more valuable to the team when he doesn't play, Jawad Williams is insignificant, and Daniel Gibson has forgotten that he is any good. But in spite of that, the Cavaliers can conceivably go twelve deep every night, with the kind of depth and supporting cast (particularly the perimeter shooting) that they simply never had before.

More importantly, they have James, partway through completing one of the best seasons in the sports history. James would be leading his team in every statistical category, were it not for the 0.3 blocks per game that he trails Ben Wallace by, and he is also on course for the second highest PER for a single season in NBA history. He's even hit some buzzer beaters, finally. LeBron is also an integral part of the Cavaliers defense, which currently ranks 2nd in the NBA, up from 11th last year. This comes in spite of some of the Cavaliers's recent imports (Williams, Szczerbiak) being regarded as poor defensive players, yet somehow they have fashioned a system that sees a pesky, frustrating brand of defense, one that denies too much penetration and which sees a terrific individual defensive player (Delonte West, Ben Wallace, LeBron James) for every conceivable matchup on the court. If they didn't keep losing to the Bulls, this Cavs team would be relatively flawless.

It pains me to admit it, because I don't like him very much (it's the chalk thing, definitely the chalk thing), but LeBron James is the best player on the best team in the best league in the world. If he wins the MVP award, it won't be debatable. If he wins a championship ring, it will no longer be a surprise.
Read Next...