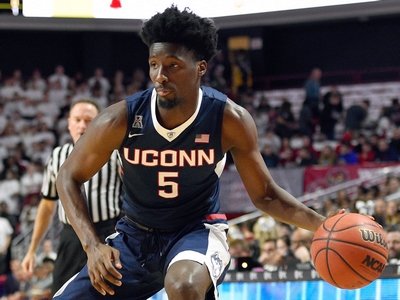 After missing out on the NCAA Tournament as a freshman, Daniel Hamilton was a key member of a Connecticut team that won its opening round NCAA Tournament game, before falling to top-seeded Kansas in the round of 32. After averaging 12.5 points and 9.0 rebounds per game in his sophomore season, Hamilton elected to enter the NBA Draft and hire an agent very early on in the process, as he had no interest in returning to UConn regardless of his standing, preferring to start his professional career instead.

Hamilton measured 6'6 ¼ barefoot at the NBA Combine, which is excellent for a NBA wing player, especially one with many characteristics of a shooting guard. His wingspan is solid (but not exceptional) at 6'9 as well, but he does not possess a very strong frame at just 197 pounds, and is an average athlete at best on top of that.

His best characteristic is his versatility, as he was one of only three players at the college level to post over five assists per-40 minutes while averaging over 10 rebounds per-40, with the other being potential #1 pick Ben Simmons, and WCC player of the year Kyle Collinsworth.

Although an exceptional passer and rebounder, Hamilton struggled to score efficiently at the college level, posting a true shooting percentage of 49.6%, second lowest among all prospects in our top 100. His shot selection has to be refined with him passing up open 3's for more contested two point shots or taking long two point attempts early in the shot clock. He won't be as big of an offensive focal point at the next level and will likely need to cut down on some of the ill-advised shots that have plagued his game since early in his career.

Hamilton is at his best in the open court, where his excellent feel for the game really shines through. In half-court situations, he is a little more limited, as he doesn't always have the fancy ball-handling or overwhelming first step required to get past his man in isolation and get all the way to the rim. He can get sped up and out of control at times, being unable to find the seams in the defense and driving into brick walls. He'll bog down the offense at times by pounding the ball while looking for an opening to make his move, and when he does look to probe the defense, he has to settle for an off balance floater or contested mid-range shot.

Hamilton's biggest issue at the college level was his struggles scoring around the basket at a high rate, converting only 41.6% of his overall two point shots and 42.7% of his attempts around the rim according to Synergy Sports Technology. While his ability to handle the ball and pass at his size is extremely intriguing, it's hard to project him as someone who will have the offense running through him due to his extreme inefficiencies inside the arc, unless he's able to improve his frame or find a way to cut down on his turnovers.

Hamilton's court vision at 6'8 may make him a project worth developing for a NBA team, and undoubtedly gives him a future in professional basketball. His 6.0 assists per 40 minutes pace adjusted is an outstanding mark for a shooting guard, and could certainly be refined into an asset if he can round out some of the rougher edges in his game.

That will include becoming a more consistent perimeter threat. Hamilton finished his collegiate career as a 33.7% shooter on three point attempts, struggling off both catch and shoot and off the dribble shots. Some of this has to do with his role, as Hamilton was at times forced to carry too big of an offensive load. He actually moves well without the ball and has a pretty good stroke that demonstrate some potential as an outside shooter, but he will need to show that his low percentages were more a result of his shot selection than his ability to actually make shots during the workout process. If Hamilton can find a way to refine his stroke and become a more efficient 3-point shooter, he'll have a much easier time demonstrating to teams he has a clear-cut role at the NBA level.

Hamilton is an elite defensive rebounder for a player of any size but especially for a predominantly wing player, as his 10.3 defensive rebounds per 40 minutes ranks sixth among all prospects in our top 100 and is one of the best historical marks for players of his size. If he is drafted, he will join a club made up of Kenneth Faried, Luke Harangody, Arslan Kazemi, Andre Roberson and Draymond Green as the only other players since 2000 who were 6'8 or shorter to post similar rebounding numbers in a single collegiate season before going on to be drafted.

Hamilton attacks the glass with fervor, intensely chasing down loose balls and pushing the ball in transition after he secures the rebound. He loves to rebound defensively and goes after every miss coming off the rim, even those outside his area. This is a reflection of not only his intensity level, but also his tremendous anticipation skills and overall feel for the game, as he pursues loose balls with exceptional timing and instincts.

The rest of his defensive contributions lag behind, though, and he will need to improve his focus and discipline to guard at the NBA level. While his height and ability to move laterally gives him some potential, his average length, strength and footwork is holding him back from being a versatile defender. He is often standing straight up, even on the ball, which limits his ability to react to plays around him. He looks disinterested on defense until a shot goes up and he can compete for a rebound, but he will need to provide more value than that at the NBA level.

A very unique prospect in terms of the extreme contrasts between his strengths and weaknesses, Hamilton has some very interesting characteristics that could be refined into an impressive overall profile if he can find a way to become a more consistent perimeter shooter and defender. It's very possible a team could fall in love with him based on this potential production and give him a shot to make a roster, either through the draft or training camp. Even if he doesn't make it on his first go-around, Hamilton is someone teams will continue to monitor at the pro level to see how his shooting, decision making and defense is evolving.
Read Next...