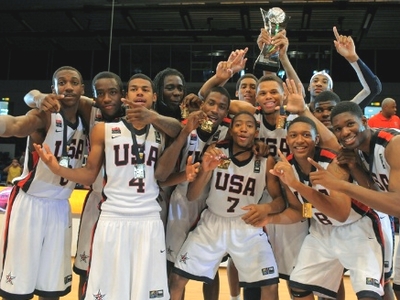 A feisty little point guard with excellent leadership skills and solid passing ability, Quinn Cook did his job well here in Hamburg. He still has room to improve his decision making skills, and he's a bit on the small side, but he's fairly quick and strong and seems to possess excellent intangibles.

Quinn is an inconsistent offensive player who can score from the perimeter and has the ability to run a team effectively when dialed in, but is prone to making questionable decisions at times with the ball in his hands, particularly when it comes to his shot selection in the half-court. He went through stretches where he forced the issue but was absolutely outstanding in other situations, driving and dishing the ball creatively, making good post entry passes, doing a great job in transition, and looking like a true floor general. His ability to run the pick and roll is already far more advanced than most players his age, and he plays with a swagger that you like to see from your team's primary ball-handler.

Quinn is a tough guy who plays with emotion, is very involved in the game, and is highly competitiveall great traits for a young point guard to have. He can also be a bulldog on the defensive end, getting in the passing lanes. He's an absolute pest putting pressure on the ball, even if his lack of size raises concerns for the future if he doesn't grow a bit more. Cook is not the most highly-touted recruit amongst this group but nevertheless has all the makings of an excellent college player.

Wroten was very up and down throughout this tournament. On one hand he showed a phenomenal talent level and an extremely good feel for the game. On the other, he struggled badly with his decision making at times and clearly did not look 100% following the knee injury he suffered earlier this year.

Wroten played on and off the ball but was clearly most effective with the ball in his hands, where his imagination and feel for the game as a shot creator and passer really shined through. He sees the floor incredibly well and is capable of making some amazing passes by anticipating his teammate's next move in a manner that only a handful of guards outside the NBA can do.

At the same time, Wroten tries to make spectacular plays on each and every possession, rendering him turnover prone and difficult to play with if the offense doesn't run exclusively through him. His jump shot remains streaky, largely due to his poor shooting mechanics. He flicks the ball at the basket with very little arc, something he absolutely must work on if he's going to reach his full potential as a player.

Wroten's body language also leaves something to be desired. He tends to pout and complain at the first sign of adversity and proceeds to blame his teammates or referees for mistakes that were clearly his. He can play excellent defense when motivated but looks too focused on gambling for steals and getting in the passing lanes.

More than most players, Wroten will need to land at a school that not only caters to his strengths but is also committed to working on improving his weaknesses. Despite his incredible talent level, he has some serious adjustments he'll need to make to his game over the next few years. The problem is that he was such a highly touted player earlier on in his career that it might not be that easy to get him to change his ways at this point. It's pretty clear that he holds himself in very high esteem.

One of the most naturally talented players seen in Hamburg, Marquis Teague nevertheless had his weaknesses as a prospect thoroughly exposed, showing just how much work he has to do to reach his full potential at the college level.

An exceptional athlete who is almost unstoppable in transition, Teague struggled badly to run his team as a point guard in the half-court, looking at times like a fish out of water.

Teague can create his own shot with ease and has amazing potential in the pick-and-roll, but he makes bad decisions at this stage of his career and has limited court vision on top of that. He settles for contested off-the-dribble pull-ups on a regular basis and tends to drive into brick walls hoping to get bailed out by the referees. He only gives the ball to his teammates as a last resort and usually tries to do so in spectacular fashion for a highlight reel assist. His leadership skills also leave something to be desired, as does his body language, which looked poor at times.

With that said, Teague's talent level is exceptionally high and his potential is off the charts, particularly in terms of what NBA teams are looking for at the guard position. His scoring instincts are terrific. He can heat up in an instant, unloading a barrage of spectacular shots before the opponent can even blink. He's had some legendary performances competing on the AAU circuit and was likely ill prepared for the style of play he encountered here in Hamburg, which is not a surprise, considering his lack of experience in this setting.

Teague is already committed to play for John Calipari at Kentucky and will likely be a star from day one at the college level. He still has plenty of things to work on until he gets there, though.

Clearly the best guard at this tournament, Bradley Beal did nothing to diminish his status as one of the top prospects in high school basketball and a clear cut NBA player down the road.

Undersized for the shooting guard position at 6-3, Beal has a strong frame, very good athleticism, a superb skill level and an amazing basketball IQ for a player his age. He made nearly 50% of his 3-pointers on almost eight shots per game, showing terrific shooting mechanics, impeccable shot selection and range that extends well past the international line. Beal continuously took what the defense gave him throughout the tournament. He played smart, steady, unselfish, team-oriented basketball, which really set the tone for this USA Basketball squad.

A good but not great ball handler at this stage, Beal can get to the rim fairly well, but he can still probably improve as a shot creator and slasher. Defensively, Beal was outstanding. He showed great awareness and fundamentals, competing on each and every possession. He looked capable of guarding either backcourt position equally well thanks to his length, strength and smarts.

The only thing holding Beal back from being considered the top prospect in his class is his height. He lacks a few inches for a shooting guard, but even that might not be that big of an issue. Expect him to be one of the top players in the SEC right off the bat playing for Billy Donovan at Florida.

Michael Kidd-Gilchrist came off the bench and didn't look to force his offensive opportunities except when called upon. Nonetheless, he played an important role on this USA basketball squad.

Gilchrist did his best Scottie Pippen impression, defending the power forward position on one end and running the point on the other. He utilized his excellent size, length and athleticism to make his presence felt in Team USA's full-court press in particular and was a real sparkplug for his squad. He crashed the offensive glass, got in passing lanes, passed the ball unselfishly, and finished extremely well around the rim, firing up himself and his teammates, but always staying steady and under control.

Gilchrist's offense is still a work in progress, particularly his outside shot, which can be very streaky, but you can't teach the basketball IQ and competitiveness he brings to the table. His intangibles are especially impressive when you consider the fact that he's just 16 years old. His instincts and commitment to defense are exceptionally rare traits for a player this young and give him a great platform to build upon as he continues to develop his offensive game.

Adonis Thomas, 6-6, Small Forward, 1993
The aptly named Adonis Thomas is 6-6, exceptionally long and athletic, and has an outstanding frame. He clearly passes the look test on first glance, to say the least. He's built like a tank and often plays like one too, bringing an unbelievable amount of energy and intensity to the table and seeing outstanding results defensively and on the glass in turn.

Offensively, Thomas has improved his shooting form significantly from the last time we saw him. The results were better than advertised as well as he looks more capable on the catch-and-shoot than we remembered him being in the past.

Thomas is still fairly streaky from the perimeter, and he's prone to taking bad shots from time to time. He still has work to do on this part of his game, especially off the dribble. As a shot creator, he's outstanding in transition and a terrific finisher around the basket, but he's just an average ball handler at this stage, especially in the half-court. He has plenty of time to improve upon this part of his game, though, and he brings so much to the table in other areas that it's easy to understand why he's considered such a highly touted prospect by recruiting services, especially when you consider his outstanding intangibles.

McAdoo was the other MVP of this squad, along with Bradley Beal. Opposing international teams were ill-prepared to deal with such a skilled and fundamentally sound big man, as he's simply light years ahead of other players his age at this stage.

McAdoo is not exceptionally tall, but he has a superb wingspan and a nice frame that will surely fill out in time. He is more smooth than he is explosive, but he's still a very good athlete any way you slice it.

Showing excellent timing, terrific hands and a great feel for moving to open spots and presenting himself for his guards at the rim, McAdoo made a killing at this tournament simply by being at the right place at the right time and finishing his opportunities around the basket. He can do so in finesse style with either hand or by aggressively dunking the ball from well above the rim. He rarely misses an opportunity to put points on the board for his team, be it in the paint or from the perimeter with his solid shooting ability and ball-handling skills.

He's the type of player who everything comes easy for and whose feel for the game, physical attributes and skill level will allow him to make an immediate impact at North Carolina. He grabbed a decent amount of rebounds on both ends of the floor at this tournament, as well. With that said, he struggled a bit on the defensive end and seems to lack a degree of strength and toughness.

O'Bryant wasn't asked to play a huge role for this USA team as its starting center and designated energy guy, but he happily played his role and showed some nice tools in the process. Standing somewhere around 6-9, with a terrific frame, long arms and solid athleticism, O'Bryant clearly has the physical tools to justify his status as an elite prospect. He is not afraid to throw his body around in the paint (doing a good job in particular on the glass) even though his energy level did lead to some foul trouble at times. O'Bryant showed some small flashes of offense with his post game, making some nice spin moves and such. He also attempted to show off a bit of a face-up game, to somewhat unsuccessful results.