Flyin To The Hoop: Elite Prospects

Rodger Bohn
@DraftExpress
DraftExpress was on hand at The Flyin To The Hoop tournament this past weekend in Dayton, Ohio, where some of the nation's finest high school prospects took part. In part one of our coverage, we take a look at the elite prospects the event had to offer--including Jared Sullinger, Jeremy Tyler, Avery Bradley, and Mouphtaou Yarou.

Jared Sullinger (#3 Rivals, #2 Scout, #1 ESPN) picked up 2 fouls within the first 2 minutes of his matchup with Jeremy Tyler, relegating him to the bench for the remainder of the first half. From the minute the second half started he got the best of Tyler however, scoring 21 points while being defended by his heralded counterpart the entire time.

Initially Sullinger was bothered by Tylers length and athleticism, having a few shots rejected early on. He then made an adjustment and used his body to shield off his more athletic foe, allowing him to finish with relative ease around the rim with a flurry of post moves. Though still on the heavy side, Sullinger looked more explosive than we last observed him, throwing down three powerful dunks in traffic.

The most glaring improvement in Sullingers game since we last covered him is certainly the progression of his perimeter skills. It was a common occurrence to see Sullinger draw Tyler out to the perimeter and easily beat him off of the dribble with one of his creative moves off of the dribble. Its not too often that you see a bulky power forward like Sullinger put the ball between his legs three or four times in a row before crossing it over and getting to the rim or finishing with a soft floater, much less against an athlete of Tylers caliber. The big man also showed off an effortless jumper from the three point line with good fluidity. Given that he is an undersized post, the advancement of his skills facing the basket leave more optimism for his long term potential.

Sullinger had the night off defensively, as his Northland teammates shared the duties of defending Tyler for the majority of the game. He did a nice job on the glass and showed good rotation when helping double team Tyler, but wasnt much of a game changer with his man to man defense.

Only a junior, we are still nearly 2 years away from Sullinger playing his first collegiate game. Obviously he is going to have to continue to work on his conditioning and explosiveness, since it doesnt appear that hes getting any bigger. Theres no denying though that we are looking at easily the most productive high school big man in the class of 2010, and one that should make a considerable impact immediately at Ohio State.

Tyler (#9 Rivals, #7 Scout, #7 ESPN) came into his matchup with Sullinger seemingly with a chip on his shoulder, playing much harder than he ever has in our previous times evaluating him. While he lost both on the stat sheet and on the game in general, it was hard not to walk away very impressed by the skills that he showed on the hardwood.

Defended by a Big Ten bound football player, it was clear that Columbus Northland was attempting to get under Tylers skin from the tip. Responding well to this physical play, he displayed a gorgeous skill set both from the perimeter and in the low post. Tyler displayed more of a passion to play down low and much improved footwork when making moves towards the basket. Any time that the San Diego native was able to get the ball inside of the paint, he finished with a power dunk no matter who stood in his path. To further understand how much he dominated the game inside, he finished with 15 dunks over a two game stretch, while matched up against top notch power forwards. 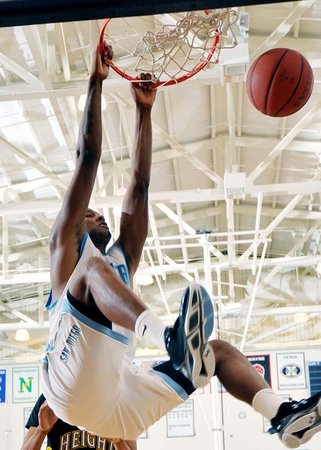 Though opting to play more so inside, we were still able to get a glimpse of the skills that he has facing the basket. Tyler drilled a handful of jumpers from the perimeter, but was more impressive with his body control when putting the ball on the deck. Its just not that common that you see a player with his size maneuvering around smaller players and finishing with soft floaters in the lane. These skills definitely leave a bit of intrigue, though youd much rather see him continue to do his damage down low.

Where Tyler struggled especially was on the defensive end. Completely relying on his size and athleticism, he bit on every single pump fake and left himself prone to picking up a number of fouls. His timing was not especially good, nor was his desire on this end of the floor. Tyler opted to play behind top post player Jared Sullinger in the post, letting him catch the ball and do whatever he wanted once he received it. Equally as concerning was the lack of lateral quickness that Tyler showed when Sullinger took him out to the perimeter, as he was simply unable to keep up with keep up with the Ohio State recruit. All of the tools are certainly there for the junior to be a nice defender down the road, but a considerable amount of fundamental work must be done before that can happen.

With Rick Pitino in attendance, Tyler seemed to do an adequate job of keeping his emotions under control. Though there were a number of times that it appeared that he was going to explode, he held back and possibly showed some maturity with his future head coach in the stands. Tylers maturity and desire will likely play a large part in how far he makes it as a prospect, but there is no denying the talent and potential possessed by this big man.

Avery Bradley (#8 Rivals, #10 Scout, #7 ESPN) was chronicled in depth in November with his play at the National Prep Showcase, and proved to easily be the best all around player that the event had to offer. His stellar play on both ends of the floor was unmatched by his counterparts, and proved crucial as to why Findlay narrowly escaped with a 3-0 record.

Simply able to do whatever he wanted on the offensive end, it was a dominant offensive performance for Bradley. He got to the rim, finished in the paint, and knocked down gorgeous mid-range jumpers. Most impressive about the Washington natives play on the offensive end was the court vision he showed. Making gorgeous passes and continuously finding the open man against the zone defenses that his team faced, the potential for Bradley as a combo guard is becoming more and more apparent each time we see him.

The main area of concern with Bradley from this past weekend was his inability to shoot the ball from beyond the three point arc. Unable to connect on a single three point shot over a three game stretch, this is something that he must continue to improve on if he truly hopes to keep defenders honest next season in the Big 12. Avery shot the ball much better when we saw him in Rhode Island, but was unable to make any of the 11 three pointers he attempted this weekend.

Bradleys defense was stellar as usual, given that he was able to put the clamps on whoever he guarded. The quickness that he possesses laterally is unparalleled by any of the elite prospects that he have focused on, and it just doesnt stop there. Not just relying on his natural gifts, Bradley actually understands HOW to defend without gambling. The stat sheet reflects that, as he collected 14 steals on the weekend with not even half as many fouls.

Truly one of the elite players in the country, Avery Bradley should come in and make a considerable impact at Texas. Its a bit premature to speak about his draft prospects before he even begins his freshman campaign, but Bradley is certainly a player who NBA scouts will be following very closely from the second he steps foot on campus in Austin.

Mouphtaou Yarou (#14 Rivals, #28 Scout, #27 ESPN) had a bit of a rough weekend at Flyin To The Hoop, battling foul trouble and seemingly unable to find any sort of rhythm on the hardwood over the two games we observed him. While his play may have not been stellar, the potential that he has could certainly be seen within his play.

For starters, were looking at a player who is a legit 610 and 250 pounds. Built like an NBA post player, he has a body that is already made to absorb the contact at the highest level. He uses his strength especially on the glass, where he proves to be a ferocious rebounder at times. This strength combined with his solid motor helps compensate for his relatively average athleticism, as he simply outworks the majority of opposing big men.

On the offensive end, were looking at a skilled big man with the ability to shoot the ball out to 17 feet when facing and also able to score on the blocks. Yarou showed off some pretty decent footwork in the pivot and appeared perfectly comfortable scoring the ball with his back to the basket. Tending to turn towards his right shoulder every time, his lack of a left hand often got him in bad situations in which he was rejected by smaller, less athletic players. This will be something he will have to improve upon drastically before he hits the Big East, where he will not be able to rely on his lack of size to score in the low post.

Yarou played hard when defending the low post, fighting for position against Dayton recruit Matt Kavanaugh. That was about where his success on the defensive end stopped though, as he was unable to keep up with this less heralded big man both from the perimeter and in the post. The Benin native appeared to be very heavy footed and struggled mightily when Kavanaugh would face the basket. He also appeared to be a bit out of shape, not making any sort of presence at all with his shot blocking. After seeing Kavanaugh dominate Yarou the way that he did, it was clear that there must be some substantial improvement on this end before he reaches Villanova.

All in all, its hard to deny the player that Yarou could potentially become when its all said and done. You dont see many African players with his size and skill set too often, and there should be immediate playing time for him as a freshman at Nova. For his sake, hopefully he reverts back to the player that he was over the spring/summer rather than the player we saw this past weekend by the time he gets to Philly.
Read Next...