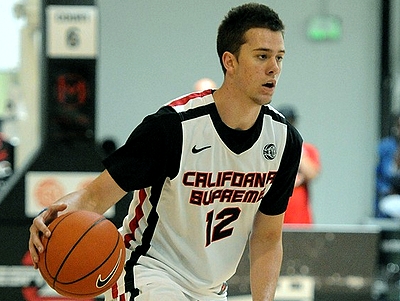 Lewis should be very fun to watch at N.C. State and will certainly keep his teammates happy with his terrific court vision. It's difficult to see him playing in the NBA due to his physical limitations, but players in the Jose Juan Barea mold have shown that it's not impossible. We'll have to see what kind of college career he can string together first.

Shepard is still the same excellent prospect from a physical tools standpoint as was observed the last three times we wrote about him, having all the length and athleticism necessary to defend as many as three positions at a high level. He showcased his versatility nicely here, and did a better job than he has in the past of staying dialed in consistently throughout the game.

Shepard didn't show much new from a skills perspective offensively, but did a nice job using his motor to stay involved, scoring 16 points on 7-for-12 shooting, mostly on lay-ups in transition or on putbacks. He did also knock down a spot-up three and another long two, but hit just 1-of-4 of his free-throw attempts, so inconsistency with his shooting likely still remains a concern.

Looking forward, Shepard obviously has some excellent tools that will make him someone to watch closely throughout his college career, and improving his spot shooting, straight-line drive ability, and keeping his effort level and focus up on both ends of the floor should be his priorities. He's yet to decide on a school, but has offers from strong mid-majors like UNLV and San Diego State, both of which could allow him to make an impact along with provide for room to grow his game. 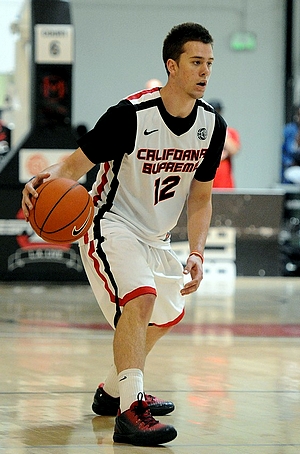 Katin Reinhardt (#55 Scout, #45 Rivals, #60 ESPN) had one of the most impressive single game performances of anyone in attendance this weekend. Reinhardt scored 35 points on blistering 13-for-19 shooting from the field and 9-for-14 from behind the arc, while displaying an impressive set of skills and an advanced feel for the game.

Standing 6'5 with a below average 6'5 wingspan, Reinhardt has a solid frame, decent size, and is a good athlete for his position, having adequate physical tools for the style he plays.

On the offensive end, Reinhardt's game relies heavily around his three-point jumper, and with very good reason as evidenced by his ridiculous 9-of-14 three-pointers made in just 26 minutes of play time. Reinhardt has effortless NBA range, a lightning quick release, excellent fundamentals, and the ability to hit shots in a variety of situations. He hit shots here pulling up moving sideways, catching on the move in transition, coming around screens, and shooting with a hand in his face, being phased by none of it and showing excellent accuracy throughout. He also doesn't seem to force the issue much and does a good job making quick use of the ball when it comes to way, playing well within his team's offense.

While Reinhardt's shooting is clearly his greatest asset as a prospect, he does bring some other things to the table on the offensive end, doing a good share of ball-handling, bringing the ball up the court, and even initiating his team's offense at times. He only had two assists in his game here, but showed good vision on his passes and seems to have a nice feel for moving the ball around.

Reinhardt is opportunistic with his scoring attempts not coming from jump shots, picking his spots well going to the rim, but showing solid toughness and instincts when he does. He's capable of going up for a strong dunk when he has a clear enough path to the rim and showed nice ability with runners and floaters in the lane on occasion, having a good feel for getting high-percentage shots off in the half court and transition.

On the defensive end, Reinhardt shows solid awareness, fundamentals, and effort level, along with solid physical tools for defending the two-guard position. He was prone to being beat laterally against quicker guards on occasion, but did a good job staying active and playing good team defense overall. He appears to be limited to guarding just the two spot defensively looking forward, but has enough physical tools to be at least a decent defender with commitment.

Looking forward, Reinhardt has the makings of a very good four-year college player who could develop nicely into a Jon Scheyer-type sharpshooting facilitator guard for the Rebels. His pro potential is dependent on how he expands his offensive skill set and how well he develops as a defensive player, but he could find himself on the radar screen eventually if his game translates well to the college game. 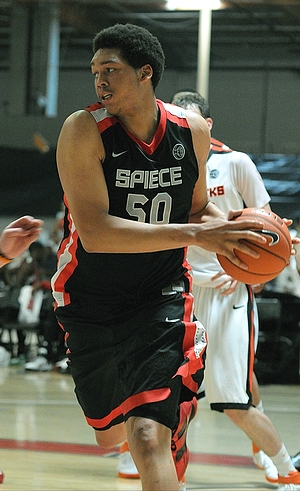 A legit 7'0 center with a solid 7'3 wingspan, Hammons has good mobility for his size, along with a developing feel for the game. He has a strong frame already holding a lot of weight, and probably isn't at his athletic peak, as he lacks much in muscle definition and could benefit from a college strength program.

In terms of his skills, Hammons is fairly raw at this stage, operating mostly with simple post moves and finishes around the basket. He shows good hands and touch around the basket along with a willingness to finish with power when necessary, though he tends to go through stretches of disappearing from the game at times, not willing to assert himself consistently. Hammons' conditioning also doesn't appear to be as good as it could be, and it affects his ability to get up and down the floor consistently and stay involved for long stretches.

On the defensive end, Hammons had a nice showing in his game here, showing a good activity level with three blocked shots, including some he did a good job rotating over from the weak side. He showed decent timing on his blocks and did a similarly good job staying in front of his man on post defense, looking solid with his defensive abilities for his age. Just as on the offensive end, however, getting into peak shape and staying consistently focused every play will be critical for Hammons going forward.

A solid cog on St. Marks' very well-coached team, Nik Stauskas (Unranked Scout, Unranked Rivals, #83 ESPN) brings a pretty well-developed skill set to the table for a wing this age, something that was on display in his 16-point performance here.

Standing 6'6 but with just a decent frame, length, and athleticism, Nik Stauskas has good size for a wing but is never going to blow anyone away with his physical tools.

On the offensive end, Stauskas already has a strong groundwork of skills to go along with a solid feel for playing the game. At his best, Stauskas does a good job moving off the ball, getting open, and making quick decisions with the ball when it comes his way, showing all the traits for a solid role player in a team-oriented offense. He's capable of making spot-up jumpers from deep, one-dribble pull-ups from the mid-range, and crafty straight-line drives with simple adjustments in the lane, showing good instincts when playing in rhythm.

While Stauskas does a good job playing within his team's offense most of the time, he can go through stretches of forcing the action with his dribble-drives, something that could be problematic at the next level. He'll also be facing bigger, more athletic opponents most nights, which could reduce the effectiveness of this area of his game, so it'll be interesting to see how he makes the transition and adjusts his play if need be.

On the defensive end, Stauskas shows a solid activity level and fundamentals, doing a good job to stay in front of his man on most plays, though he is prone to being beat laterally by quicker, more athletic guards, something that could become more apparent if he spends most of his time at the 2-guard spot at Michigan.
Read Next...